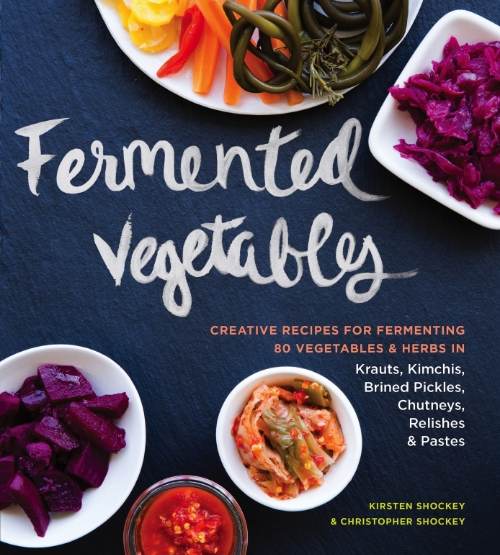 Even beginners can make their own fermented foods! This guide includes in-depth instruction for making kimchi, sauerkraut, and pickles and then offers more than 120 recipes using the same methods to make over 80 other fermented vegetable and herbs, including pickled Brussels sprouts, curried golden beets, carrot kraut, and pickled green coriander. Many of the recipes can be made in small batches (such as single pint). There are also recipes for using the fermented foods.

posted 6 years ago
Looks like a good book. I can also recommend a book on fermented vegetables by Wardeh Harmon.
John S
PDX OR

Fermented Vegetables is a well organized and educational cookbook. I have come to realize that Lacto-fementation is an important part of a healthy diet; and this book provides plenty of wonderful options. This book is full of useful tips and information, including troubleshooting, and how and when to ferment your vegetables
D. Logan
gardener

I've only just finished reading this book, so haven't yet made my first batch of fermented vegetables, so I can't speak to any of the recipes. The information in the book itself was quite interesting however. The authors are very up-front about where other books have influenced their own and are somewhat conversational in their style of writing.

Several years ago, I tried my hand at fermentation, following a recipe precisely and being very careful along the way. The resulting pickles were enough that my family hasn't tried fermentation since. The cucumbers held up, but were way too salty. Worse, everyone who ate them in the house ended up with a sore throat. Presumably, something was wrong with the fermentation process to cause this. It's had me leery to try fermentation again without owning a lot of specialized equipment.

Having read this book, I can see some of the problems with the recipe I used and am thinking to try my hand at some Kraut and Pickles sometime again in the near future. I like that they spend time addressing salt. That they avoid pickling salts was a surprise, but they explained it well enough that I find myself agreeing with their logic.

They also sprinkle interesting facts through the book that broadened my knowledge base beyond just the fermentation. The best example of this was a notation about the eating of uncooked cabbage. My wife has done so a great deal growing up, but didn't realize it was agitating her hypothyroidism. They offered up advice to allow her to enjoy fermented Kraut without running into this issue in the future, so we are both very happy about that.

This book has offered me a lot of information and opened up a sense of hope that I don't have to lay down a huge stack of money on special equipment or follow exacting recipes just to enjoy something that mankind has been doing for such a long portion of its history. I'd certainly recommend this book for anyone who is a beginner and especially for those who've had issues in the past with fermentation gone wrong. If the ferments turn out well, I may have to go back and adjust the rating upwards.