The Natural Way of Farming by Masanobu Fukuoka 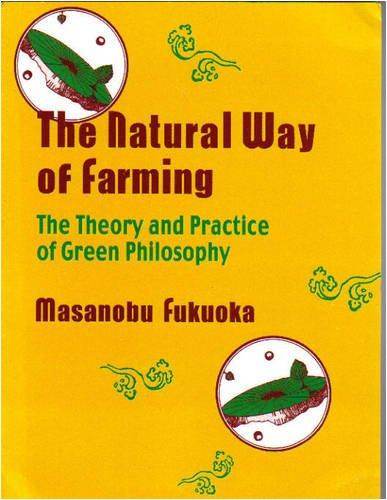 "Natural farming is based on a nature free of human meddling and intervention. It strives to restore nature from the destruction wrought by human knowledge and action, and to resurrect a humanity divorced from God.

While still a youth, a certain turn of events set me out on the proud and lonely road back to nature. With sadness, though, I learned that one person cannot live alone. One either lives in association with people or in communion with nature. I found also, to my despair, that people were no longer truly human, and nature no longer truly natural. The noble road that rises above the world of relativity was too steep for me.

These writings are the record of one farmer who for fifty years has wandered about in search of nature. I have traveled a long way, yet as night falls there remains still a long way to go."

I loved this book ! It is Fukuoka's textbook on his methods. Very in depth discussions of his techniques with lots of philosophy thrown in.

posted 7 years ago
I love this book too! Thanks for posting the additional information, links, and videos!

He has another book that interests me, although i have not read it yet: Sowing Seeds in the Desert: Natural Farming, Global Restoration, and Ultimate Food Security. Has anyone taken a look? Any Desert Permies that use this as a guide?
Miles Flansburg
pollinator
Posts: 4714
Location: Zones 2-4 Wyoming and 4-5 Colorado
480
3
I like...

posted 7 years ago
Thanks Danielle !

The other review is here if you would like to take a look.
https://permies.com/t/30953/books/Book-Review-Sowing-Seeds-Desert

Also if you could add how many "acorns" you would give the books that would be cool.

Danielle Diver wrote:I love this book too! Thanks for posting the additional information, links, and videos!

He has another book that interests me, although i have not read it yet: Sowing Seeds in the Desert: Natural Farming, Global Restoration, and Ultimate Food Security. Has anyone taken a look? Any Desert Permies that use this as a guide?

hey there, ME! i just noticed that there is a thread already devoted to this book, just thought id let you know!
Ok! Thanks, ME! why am in not surprised?!

The other review is here if you would like to take a look.
https://permies.com/t/30953/books/Book-Review-Sowing-Seeds-Desert

Also if you could add how many "acorns" you would give the books that would be cool.

I would give it a bountyful ten whole acorns. In all my back and forth hops across the great big pond between the US and Europe, this one goes with me everywhere I go.

This book changed the course of my life to some degree. About 8 years ago I was reading something and it mentioned seedballs. "what the heck is a seedball?" I wondered. So I googled it and found a video, "whoa, look at that crazy looking old dude with the long grey beard!" I thought. From there began the path that forever changed the way I thought of the concepts of 'nature' and 'farming' or at least made me more aware of it.

"Do nothing" farming is something we can all take many lessons from in this book Fukuoka seamlessly shifts from practical and tactile to the philosophical. He examines the limits of the scientific, reductionist approach and provides concrete examples of methods he has used.

I have a very mixed feelings about tis book.
While I love Fukuoka's green philosophy, and I even love to read about his way of farming, my attempts to apply his methods in practice has, I'm sorry to say, failed.
I'm pretty sure it was my lack of knowledge and being not enough experienced when I was trying to follow his steps.
I have tried to use seedballs to "bioremediate" sandy land, to introduce ground cover and n-fixing species, but no luck.
I have tried clover ground cover but it has been too dense for other plants to do well.
I would love to be successful in "do nothing" approach, but unfortunately it is not working for me.
Nevertheless, the book is well worth reading and I'm sure it will be useful for a number of permies, perhaps those who operate in climates more similar to Fukuoka's.

This book has some good information, but it seems to be very few and far between. It is filled with mostly philosophy, and I thought it lacked detailed information on actually growing things naturally.

I really like the general theories in the book, but I thought that the book lacked actual detailed information on how to put the theories into practice.

Here are some of the quotes I really enjoyed form the book.


Man tries also to control weeds, but nature does not arbitrarily call one plant a weed and try to eradicate it. Nor does a fruit tree always grow more vigorously and bear more fruit when pruned. A tree grows best in its natural habit; the branches do not tangle, sunlight falls on every leaf, and the tree bears fully each year, not only in alternate years.


My greatest fear today is that of nature being made the plaything of the human intellect. There is also the danger that man will attempt to protect nature through the medium of human knowledge, without noticing that nature can be restored only by abandoning our preoccupation with knowledge and action that has driven it to the wall. All begins by relinquishing human knowledge.


Nature works constantly to strike a balance, to maintain an equilibrium. When this balance breaks down, forces come into effect that work to restore it. All phenomena in the natural world act to restore and maintain a state of equilibrium.


In nature, plants live and thrive together. But man sees things differently. He sees coexistence as competition; he thinks of one plant as hindering the growth of another and believes that to raise a crop, he must remove other grasses and herbs. Had man looked squarely at nature and placed his trust in its powers, would he not have raised crops in harmony with other plants? Ever since he chose to differentiate crop plants from other plants, he has felt compelled to raise crops through his own efforts. When man decides to raise one crop, the attention and devotion he focuses on raising that crop gives birth to a complementary sense of repulsion and hate that excludes all else. The moment that the farmer started caring for and raising crops, he began to regard other herbs with disgust as weeds and has striven ever since to remove them. But because the growth of weeds is natural, there is no end to their variety or to the labors of those who work to remove them.


In the same way, when people spot signs of a plant disease or an insect pest, they immediately go about trying to get rid of it. The smart thing to do would be to stop treating insects as pests and find a way that eliminates the need for control measures altogether.


There is no good or evil in nature. Natural farming admits to the existence neither of insect pests nor of beneficial insects. If a pest outbreak occurs, damaging the barley, one reflects that this was probably triggered by some human mistake. Invariably, the cause lies in some action by man; perhaps the barley was seeded too densely or a beneficial fungus that attacks pests was killed, upsetting nature’s balance. Thus, in natural farming, one always solves the problem by reflecting on the mistake and returning as close to nature as possible. Those practicing scientific farming, on the other hand, habitually blame insect infestation on the weather or some other aspect of nature, then apply pesticides to exterminate the marauding pest and spray fungicides to cure diseases.


To some, natural farming may appear as a return to a passive, primitive form of farming over the road of idleness and inaction. Yet because it occupies an immutable and unshakable position that transcends time and space, natural farming is always both the oldest and the newest form of farming. Today, it presses on at the very leading edge of modern agriculture.

While I agreed with a lot of the information in this book, I also strongly disagreed with two main points: the first being that he suggested that there is no alternative to pesticides being used for some plants, and the second being that growing fruit trees from seed is not worthy of the effort and that they always return to a worse state than before.

I've personally seen evidence that contradicts both of these points that he makes. Here are some of the quotes of these from the book.


In principle, pesticides should not be used in natural farming. But at times there may be no alternative. The following chart is a simple guide for compounding pesticides and their proper and safe use.


Obviously, the proper way to grow a citrus tree having a natural form would be to plant the seed directly in the orchard. But the seed itself, if I may press the point, is no longer truly natural. This is the product of extensive cross-breeding between different varieties of artificially cultivated citrus trees; if allowed to grow to maturity, the tree either reverts to an ancestral form or produces inferior hybrid fruit. Direct planting of the seed, therefore, is not a practical option for fruit production.

As a general overview, I thought it had some good information and theories, and some really good ideas and observations, but I also disagreed with some of the information when he started talking about putting the theories into practice, and it had way to much philosophy for me, especially after the first few pages in the beginning and middle of the book. I enjoyed it, but it wasn't as good as I was hoping it would be unfortunately.