guess what I found!
Here is an interesting article on organic tick control from ATTRA:
http://attra.ncat.org/calendar/question.php/2005/10/31/p1302

The small-predator angle is not one I had seen mentioned before.
show more
12 years ago
homestead

I've heard it's quite easy:  take long sticks of fresh willow, stick it in the ground, keep it moist.  Bend and tie in the shape(s) you want, trim as necessary.

But it's not something that you can build and then walk away from.  You have to do maintenance pruning to keep it going the way you want.  If you don't, it just turns into a willow jungle.

Here's a site I found when I googled 'living willow structures':
http://www.bluestem.ca/living-willow-structures.htm

native plants
I don't think the NativesOnly issue is a "best" issue so much as it is a control issue.

We have so many people who think their way is the only way.  And add to that a bunch of hypocrites who plant only natives on their property, and yet buy 98% of their food from other sources.

It would be nice to draw the line at massive damage, but even that isn't going to happen anytime soon (never, if Monsanto has it's way).

You see it in a lot of beliefs.  Just nod your head and go your own way.  You don't need to beat other people over the head with the PDM, and they don't need to insist that everything you grow has white flowers and starts with E.
show more
12 years ago
plants

grazing riparian areas vs. salmon
Wild animals passing through don't usually do an incredible amount of damage.  Penned animals do.

As far as I'm concerned, Sepp Holzer is not God.

Also, the attitude that if you own land alongside a river you should be able to use it for your special purposes is simply rationalizing your particular form of destruction.

Riparian areas are intensely fragile ecosystems.  If you could find any that aren't damaged (HA!), you would probably find that they have been left alone (probably totally inaccessible, about the only way to avoid Man's rampant destruction).  No camping, no boat ramps, no reconstruction, no renovating an area to encourage sport fish, no tilling, no plant harvesting, no logging, no livestock.

And where would a person buy the larvae to get started?
show more
12 years ago
composting
city / suburban chickens
Chickens on a small lot, and thus confined to a small area, really require a mulch of straw or similar.  I've seen sawdust used, and I've shoveled wet sawdust, and I was not thrilled.  All it does is pack down and stink.

I use straw in the bottom of the coop (4x4'), at least 4" or 5" deep, and every late afternoon I scatter a good handful of scratch over the straw.  Looking for the tasty little nuggets, they kick and fluff the straw, helping to keep it dry.  Much of the manure sticks to the straw.

If you just throw down some kind of mulch and don't give the chickens a reason to work it over, they won't.  It just mats down and stinks.  And you can't leave it there forever, either.

Chickens are relatively low-care, but they're not no-care.

I will be building a chicken tractor soon, I hope, but it is mainly to confine them in the areas out side their pen to prevent crop damage (esp young plants).  I intend to move it two or three times a day, depending on the site vegetation.

Most chicken tractors are deliberately left in one spot long enough to kill everything -- that's the reason they're using chicken tractors in many cases.  And they usually use a higher density of chickens than I do.

But I had to learn the hard way that chicken tractors and coops are two entirely different things -- a coop can be fairly predator-proof, and chicken tractors aren't, unless you make them so heavy that you can't move them easily.  My armored chicken tractor must have weighed over 200 lbs -- big mistake.

My new tractor will be 1x2s or 2x2s with chicken wire and a small hatch on the top with some shade provided.

show more
12 years ago
chickens
neem oil for fleas?
How much area are you talking about? 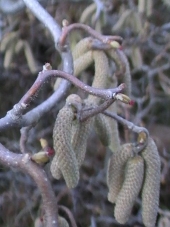 hazelnut bushes with no nuts
You're not a nut nut?

Maybe your local Cooperative Extension Service could identify it for you.  http://www.csrees.usda.gov/Extension/