All about the Daily-ish Email! 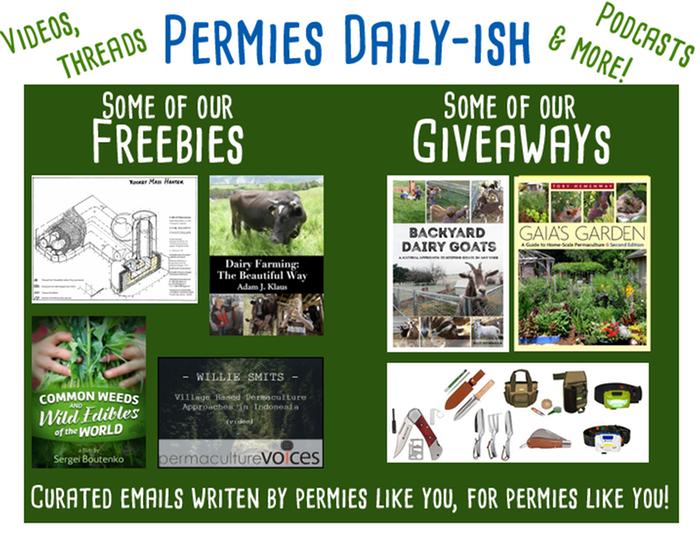 what is the daily-ish email?

Want to learn more about permaculture and homesteading and making the world a better place? This daily-ish is for you! It is written by people like you, for people like you. It's a way to learn about giveaways, get freebies, and find out about awesome threads on permies that are full of good info, and a way for you to learn permaculture and homesteading. It's full of avenues to make a better world by doing good things instead of being angry at the bad guys.

what does daily-ish mean?

We have so much stuff to share about the world of permaculture that we send out an email just about everyday in an effort to spread as much of this information as far and wide as possible. These emails are curated by a wonderful group of permies.com users and volunteers and cover all aspects of permaculture. In any given month, there will be something like 30 emails that go out, but some days will have none and other days will have three. Thus the "ish"!

We wish to have so many people signed up to my dailyish email that we're capable of using our strength as a group to make some serious impact on the world through permaculture. To meet this goal, Paul and the permies community are giving away tons of free stuff to folks who are signed up for the daily-ish. Immediately after signing up, you'll begin receiving free items from our community including rocket mass heater plans, videos, podcasts, ebooks and bunches of other stuff. From time to time we also give away tickets to events, online summits and conferences. Folks who are signed up to the daily-ish also have the opportunity to win books, tools, DVDs as well as other items from our online partners.

stuff we are giving away now!

You can see the entire current list right here!

We're worried that people will just unsubscribe after they get their free stuff, and well, that makes for quite a transient army for changing the world for good. Can't have that! So, if you stay signed up for the dailyish, here are some things we may be throwing your way in the near future.

The daily-ish isn't just a way to get free goodies and awesome threads, it's the best way to find out about our giveaways! We've done so many giveaways over the years, that we've lost count, but we've hosted at least 120 giveaways!

We've given away FOUR COPIES of each of these books and videos:


The Permaculture Orchard DVD by Stefan Sobkowiak
and a WHOLE LOT more! You can see the complete list HERE!


And, even tickets to events such as:


Wait, it says I can subscribe for other types of emails, too? What do all those gibberish terms (Permaculture stuff, PNW stuff, Missoula stuff, and World Domination stuff) mean?

Permaculture stuff: Paul tries to put out one new thing a day. A video, a podcast, an article, etc. Sometimes, he goes a week or two without anything new. Sometimes there's three new things in one day.

PNW stuff: Paul finds that he travel through Oregon, Washington and Idaho a lot. If he's going to be speaking or looking for video opportunities or just coming through an area, he'll post something here. I suspect that this is something where he won't post anything for a month or two, and then put out two or three posts in a week.

Missoula stuff: Since Paul lives in Missoula, Montana, he has stuff to announce here a couple of times per week. It might be an announcement of a presentation he will be giving, or of a new video he has about something in Missoula, or an upcoming workshop he's involved in.

World domination stuff: Learning how to get our message out more requires us to constantly learn - so sometimes Paul will ask people "go to this website, click on X, and we'll see what happens when a bunch of us do that." While most of this sort of thing happens in the tinkering forum, some folks don't wanna check into the tinkering forum every day. So this makes for an easy way to let folks know that we are attempting to do something. I suspect that a month will pass without anything on this list - and then he'll send out one or two in a week.


Because we like to spread permaculture and make the world a better place, we give away a lot of other free stuff without even being on the email list.

some of Paul's articles:

these awesome forums that you're already on!


and a whole lot more!

Shiny button, because it's fun to push buttons!

posted 1 year ago
Some of my gobbledygook about the dailyish ....

- we are trying to shift the dailyish away from "the paul wheaton show" and to the "permies.com community show"

- when we used aweber, the dailyish grew by 300 to 1000 people per month.  But when we shifted to in-house stuff, growth stopped.   It has been more than five years and we are still trying to mend this.

- thanks to the people that have provided cool stuff as freebies!

- while more than a dozen people have worked to get the dailyish to be amazing again, I wish to give bonus thanks to Nicole, Bill and Devaka for this most recent big leap


If anybody spots a bump in the road, or something that might improve anything about the dailyish, please speak up!

posted 1 year ago
I am a daily-ish! I really like the ish part. And a great big thank you for all the freebies!

Ever optimistic tree hugger. Dreams of food forest on our Pinelands plot.

If anybody spots a bump in the road, or something that might improve anything about the dailyish, please speak up!

No link to sign up...  Just loops to the give-away.
paul wheaton
steward

If anybody spots a bump in the road, or something that might improve anything about the dailyish, please speak up!

No link to sign up...  Just loops to the give-away.

I'm an indigenous person of color, welcoming connection with people of all colors, but super thrilled to encounter other BIPOC wanting to live on the land, heal.

krister ågren
Posts: 1
posted 6 months ago
Hi!
I have tried to get daily e-mail but i don´t get any!
best regards from Sweden
Krister
krister@bredhall.se
Joseph Lofthouse
steward

krister ågren wrote:I have tried to get daily e-mail but i don´t get any!

I checked the database. It's looking like you are signed up properly on this end. Are the daily-ish emails going into a spam folder on your end?