Joseph Lofthouse grew up on the farm and in the community that was settled by his ggg-grandmother and her son. He still farms there. Growing conditions are high-altitude brilliantly-sunlit desert mountain valley in Northern Utah with irrigation, clayish-silty high-pH soil, super low humidity, short-season, and intense radiant cooling at night. Joseph learned traditional agricultural and seed saving techniques from his grandfather and father. Joseph is a sustenance market farmer and landrace seed-developer. He grows seed for about 95 species. Joseph is enamored with landrace growing and is working to convert every species that he grows into adaptivar landraces. He writes the Landrace Gardening Blog for Mother Earth News.
Farming Philosophy
Promiscuous Pollination and ongoing segregation are encouraged in all varieties. Joseph's style of landrace gardening can best be summed up as throwing a bunch of varieties into a field, allowing them to promiscuously cross pollinate, and then through a combination of survival-of-the-fittest and farmer-directed selection saving seeds year after year to arrive at a locally-adapted genetically-diverse population that thrives because it is closely tied to the land, the weather, the pests, the farmer's habits and tastes, and community desires.
Joseph lives under a vow of poverty and grows using subsistence level conditions without using cides or fertilizers. He prefers to select for genetics that can thrive under existing conditions. He figures that it is easier to change the genetics of a population of plants than it is to modify the soil, weather, bugs, etc. For example, because Joseph's weeding is marginal, plants have to germinate quickly, and burst out of the soil with robust growth in order to compete with the weeds.
Biodiversity
Joseph is preserving the genes of thousands of varieties of plants, but does not keep individual varieties intact or pure. The stories don't matter to him. What matters is the web of ongoing life. For his purposes a squash is a squash is a squash. Plant purity doesn't exist in Joseph's world, other than in very broad ways like keeping hot peppers separate from sweet peppers. Some landraces might even contain multiple species! 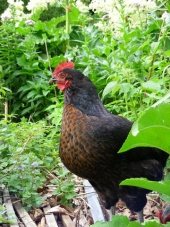 Favorite chicken breed?
Barnyard mix pleases me more than any breed.
show more
17 hours ago
chickens
Pond-friendly U.S. states
Water doesn't disappear when it evaporates. It settles as dew at night, or as rain in the mountains.
show more
1 day ago
ponds

i need some gourds out of season by feb 19th '23 : P
I'm a lumper, rather than a splitter: Things are more alike than different. To me, any squash in the grocery store right now could be called a gourd. Acorn squash and Delicata are even the same species as what people call decorative gourds. Butternut is a close relative.

I'm still harvesting apricots, apples, plums, and asparagus that was planted 150 years ago and neglected ever since.

Many of my edible weeds were part of the native American agricultural system which collapsed hundreds of years ago.
show more
2 days ago
plants

Photos of Joseph Lofthouse's Garden
I'm speaking 3 times next weekend. All are free, just need to register ahead of time.

Landrace gardening teaches that plants are stronger, tastier, and more reliable if impure parents are cross-pollinating and undergoing survival of the fittest selection. An heirloom is a variety that was developed long ago, on a far away farm, and has undergone 50 years of inbreeding. Landraces are locally-adapted to current conditions, and have enough genetic diversity to change with the ecosystem.
Get Tickets

Explore the tension between curating heirloom varieties and offering locally adapting modern landraces. Learn some of the benefits and techniques of expanding the genetic diversity of varieties you share in your community. A landrace is a food crop with lots of genetic diversity which contributes to its ability to survive new pests, diseases, or changes in cultural practices or in the environment.
Get Tickets

William DeMille, our guest speaker, educates about soil health. I hope that he'll contribute some thoughts about how weeds fit into that philosophy. I had a lovely time exploring William's walipini this week. The get together is free to members of the forum or video course.
Going To Seed

show more
3 days ago
seeds and breeding
Have you implemented any changes to your homestead in anticipation of extreme weather?
My farm is under constant thread from heat, cold, rain, drought, wind, hail, sun, flood, frost, etc...

Redundancy, and preparing for eventualities occupy my thoughts. For example, I can heat my greenhouse with propane or kerosene. I expect a severe wind storm about every 7 years, therefore strengthened the greenhouse with extra beams and riveted them together.

I know the summers will be blazing hot, so the greenhouse has shade cloth and auto-openers on the windows.

I know that flash floods from summer thuderstorms can flood my greenhouse, therefore I built a berm to protect the greenhouse. No emergency sandbags necessary, because the land was altered to make them unnecessary.

The greenhouse can be irrigated with two different systems, and I alternate between them. A third system could easily come online if needed.

I give these same sorts of redundancy considerations to every system and process on my farm.

Swale End Design Question
It seems to me like the width of the swale matters more than its depth. Animals can really trample narrow bunds. Although, I often start by building short, narrow bunds, and then modify them after I see how the water is actually flowing. I'm using the crudest of surveying equipment -- A level on an A-frame, or on a string.

The top swale especially may collect a lot of sediment, and could benefit from added height. I typically use the collected sediment to increase the height and width of the swales. The bigger the swale to start with, the longer it will take to fill with sediment. I'm building swales with hand tools, so I like a little bit of continuous building over a long period of time.

show more
1 week ago
earthworks
Commercial feed and egg production
I bought chicken food today from a farm supply store. It appeared that there are many different types of food available from many different brands. Crude protein varied between 7.5% and 22%. Most common was 16%. Some feeds were grain only. Some included vegetables.