Getting it right the first time, an 8" Batch Rocket

Peter van den Berg wrote:Hi Frere Daran,
The ones I had from Belgium are bought from Joris Pouls, who's building his own version of batch boxes nowadays. He's the one who started to use those superwool risers some years ago. See his website.


Wauw, excellent info, thank you much Peter!
___
I'm finally gearing up, with two possible places to build my first rms, 'will be in spring probably

show more
5 years ago
rocket stoves
Getting it right the first time, an 8" Batch Rocket

Peter van den Berg wrote:
This is made from ceramic fibre, the same stuff as superwool. The tube is made using vacuum with an added binder and is used in industrial processes such as steel melting. It is highly heat resistant, insulating and very little mass, ideal for a heat riser. Try googling "ceramic fibre tube", I've heard of one supplier in Belgium but there should be suppliers all over the world.


High Peter,
I happen to be Belgian and am trying to source a good ceramic fibre tube

Any chance you would remember the name of that Belgian supplier? (or any European supplier for that matter)
Thanks for any info!
show more
5 years ago
rocket stoves 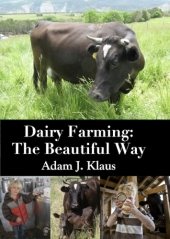 Ant Wofati Progression
Hi Davin, thanks for your videos, they provide a great real-life perspective into what's going on at the Ant Village!

The only problem I had was hearing your interviewees outdoors. I don't know much about video making, but thought there should be a cheap way to record audio on another smartphone that stays with the person you're filming. And I found these little tutorials that you may find interesting for your future videos:
Use a Smartphone as a wireless mic
DIY microphone for under $20

Thanks again and keep the good work!
show more
5 years ago
wofati and earth berm

Len Ovens wrote:
Europe is entirely a different place than N America. I should have been specific... but on the other hand, when I use the word sarcastic with a smiley, I don't expect to be taken seriously. (sort of a joke with some truth about anti-permie folk)

This discussion is very constructive (for me at least!) I live in Spain now and plan to move to Extremadura, a province that got its name from its freezing winters and hot summers. So year round natural freezing is not an option, but if I can get my hands on a (2d hand) Beko freezer, that would be perfect for me. Cold room wofati for storing roots, hardy fruit, etc. with a freezer box inside for safely keeping frozen stuff with minimal energy input. The kids are growing and will soon be out of the house, so we plan to move to the mountains in two or three years time, 'doing my homework now to hit the ground running!
show more
5 years ago
wheaton laboratories

Len Ovens wrote:
It would be hard not to be sarcastic about that one

freezers generate heat...
Those who live in warm climates are more likely to put them outside so as not to warm the house so much.
Those who live in cold climates would never leave their 21C homes to get food out of a freezer.
Or so goes the manufacture thinking, would be my guess. Probably it is more that complexity costs, simplicity is cheap, appliances used to be designed well, now they are designed better... they only last 10 years these days. This is the age where people think of the unit as "old anyway" as opposed to "I just bought that thing". But the "old" age is shrinking.


Hmm, in northern Europe, where I used to live, freezers go in the garage (see this poll) just because people are energy conscious: they do not want to heat their home with electricity in winter, that's too expensive. And they don't want the heat during the long summer days. And it's fine to have the freezer away in the garage, because they open it about 100 times less than the fridge. Now here is a brand, Beko, that designs freezers for low temp environments (down to -15°C/5°F):
www.beko.co.uk/support/faqs/freezers/can-i-use-my-beko-fridgefreezer-in-a-garage-or-low-temperature

Looking at a refrigeration trouble shooting site... the temperature around the refrigeration line that goes to the the freeze coil can lower the output pressure as well.

Here is a link to try: Low Ambient Compressor operation Which gives ideas on how to operate a compressor in low ambient conditions. Remember that a home freezer chest is designed to work within one temperature range and has no way of adjusting to low ambient operation.

So deciding if the reduced compressor use over balances the shorter compressor life and any efficiency while running is not something that I have tested... the comments in the first link are generally fairly short term and do have warnings about lubrication as well. Older units seem better built and may have better (and more toxic/poisonous) types of lubricants/refrigerants.


Thanks Len, interesting info! I couldn't open the "emersonclimate" link, but found more info googling "Low Ambient Compressor operation". This Mitsubishi manual is especially interesting imho:
Question: "Is it possible to safely operate [...] air conditioners in cold ambient conditions [...]?
Answer: Yes and No. [...] Commercial equipment is generally available in two configurations: standard equipment which (similar to residential) is designed and manufactured to operate only at ambient temperatures above 55F (13C), and low ambient options which will allow the equipment to operate year round, even at very low ambient conditions.
It then goes on to explain how coolers are designed to cope with low temps. So you are right, it's important to carefully check the specs of the freezer, but if you get your hands on a properly designed unit, no problem at all I would say... Maybe freezers properly designed for staying in a freezing garage are easy to come by in Canada and the northern US?
show more
5 years ago
wheaton laboratories

Len Ovens wrote:
It may be worth remembering that a "regular freezer" will not work well in a chilled room. The compressor needs "room temperature" to work efficiently and to last long. This has been discussed in other threads. However, I think the purpose of this thread is to find a way of keeping things frozen without a freezer/power.


Hi Len,
'Can't find solid references that freezers don't work well in a chilled room, rather positive experiences such as here:
https://permies.com/t/12187/frugality/deep-freezers-frost-root-cellar
Could you provide links?

As for keeping things frozen without power, I suppose you need to be in a place with long freezing winters, and put enough mass & insulation. Otherwise you'll need some freezer or Coolbot, or you will spoil all your stuff in summer...
https://permies.com/t/37748/food-preservation/Building-cold-room-garage-fix

freezer wofati
Same as Joshua, this reminded me of a page in John Hait's book where he briefly explains the concept of a cold trap PAHS: 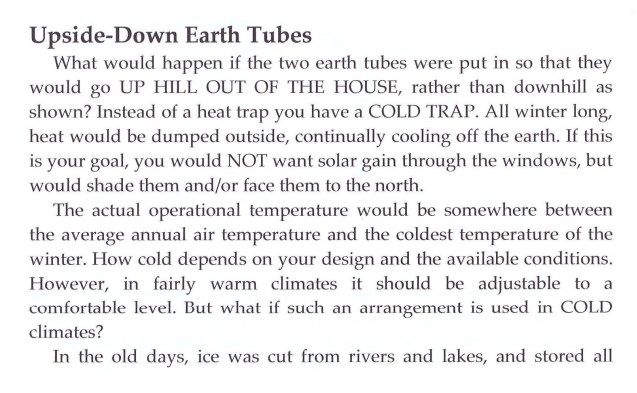 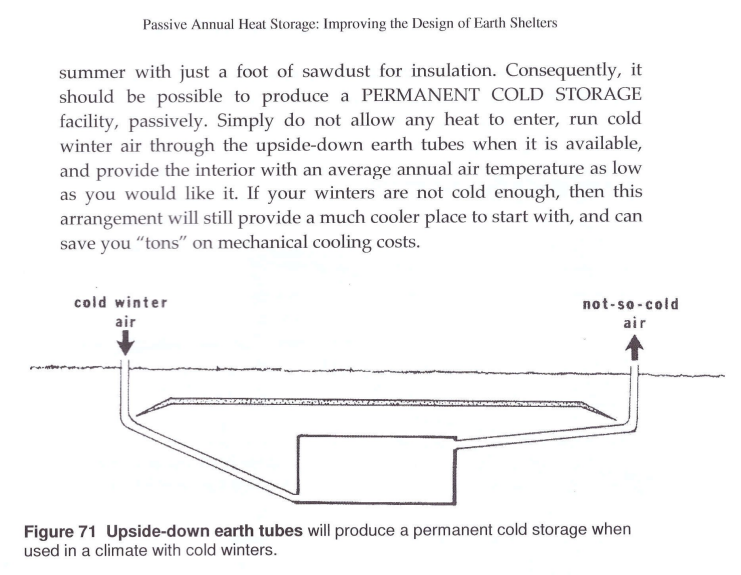 You don't need to plug the pipes in summer, because the air in the cold chamber is much denser than the lighter, warm outside air. Therefore, the circuit is automatically "plugged" by the cool air in the chamber when it's warm outside and only "opens" when it's colder outside. Build and forget. Brilliant!

The colder it gets, the more the system pumps and stores "coolth". The average temperature then depends on thermal mass and insulation. If you want to freeze food year-round and have some electric power available, just put a regular electric freezer in you cold chamber. It should only briefly kick in like once a day in summer (when your photovoltaics are running full power) and play coolbox through the winter. Plus your food is perfectly safe at thermostat-controlled temperature.
show more
5 years ago
wheaton laboratories

Lantern: One Device, Free Data From Space Forever (Indiegogo Campaign)
The idea sounds great and the hardware looks awesome, but some details bother me.
On the one hand, it broadcasts a very selected set of information with a strongly centralized control - in essence technically assured censorship.
On the other hand, it is funded by the Media Development Investment Fund, that is itself funded by George Soros, a big meddler into other people's affairs. If Soros is in it, I suspect his neo-con pals want to use the project for propaganda purposes to promote their crony interests (read overthrow governments, as in Irak, Lybia, Syria, Ukraine or Venezuela, to name just the latest victims). I for one want to be no part of that.
Open systems for broader information access already exist. Meshnet is such a solution that allows direct P2P info sharing between locally connected devices as well as regular Internet connection sharing. Meshnet provides a hybrid framework that is designed to extend the controlled Internet we know today and slowly merge it into a truly free, P2P network.
The Spanish Meshnet implementation called Guifi.net is now providing coverage to a large part of the population in Spain and Portugal and is growing fast, with new implementations around the world every month.
I would love to see mini-satellites and balloons used to support an open Meshnet solution, rather than a system controlled by Google (Project Loon) , Facebook (Internet.org) or Soros (Outernet)...

Have a great day
show more
6 years ago
gear