Dog discipline
Thanks for all your suggestions!!! I definitely will try everything!
show more
7 years ago
dogs and cats
Dog discipline
Hello,

My dog has a recurring problem. When he gets nervous in the house, which is often in the early morning when my husband is getting ready to leave for work, he pees. Or sometimes when you're playing with him. He's a year old, maybe a little older.

Scene 1:
My husband, Terry, wakes up and goes out to the living room where the dog is. He sees his sunglasses on the floor (he works outside so they're important), and crouches down next to them while saying in an angry tone, "what happened to my glasses?" The dog jumps up onto the couch and pees on the couch, then, as he is rolling into his submissive posture on his back, pees right in my husband's face!!! Terry starts yelling, and the dog hops off the couch and runs all over the house, peeing.

It happened again this morning. . . Scene 2: dog peed a little on the couch. No one knows why! We got upset, and tried to take the dog outside. He peed the whole way outside.

This has to stop. It's driving me nuts, mainly because of how Terry handles it. He gets angry, yells, strikes the dog on the nose, and drags him by the scruff of his neck outside. Drags him. He says that he isn't striking him, that he is just tapping the dogs nose to show him it's wrong. Is this right? What do we do? I haven't had a dog since I was a young girl; I don't quite know how to train a dog. I just wonder if there is something in the way of positive reinforcement. I've heard to follow the dog out when he goes to pee and congratulate him, but our dog pees on the perimeter of the property, where we like him to go, usually.

Any advice would be great.
show more
7 years ago
dogs and cats 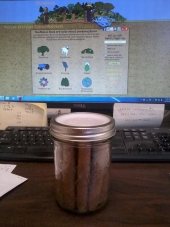 anyone in NE PA?
I live in between Wilkes-Barre and Williamsport. Anybody nearby?
show more
7 years ago
eastern usa
German shepherd/Saint Bernard mix right for me?
Yes, I did have to leave him home when I went to work. He was alright, though, only had to wait 2 hours for my husband to get home! However, at night when I get home he is all excited and wants to play. I get home at about 12:30am, and when I go to bed (even after playing with him) and whines and cries. The first night, he kept my husband up all night. In the morning when my husband leaves at 5am, pup thinks its time to play AGAIN and refuses to let me sleep! I almost slept on the couch last night just some everyone could get some sleep! He has fleas, so he's definitely not coming to bed with us until the flea meds do their job pretty adequately.

I'm so tired.
show more
7 years ago
dogs and cats
German shepherd/Saint Bernard mix right for me?
Thank you very much for all the tips! I absolutely will take you up on your offer for more advice when the time comes! First day with pup went well. He is apparently very, very attached to me already. He still doesn't like going in the car, but unfortunately there were a few times today when he had to come with me. A friend recommended I take him with me as much as possible early on to show him that he belongs with me. I'm very lucky, he is such a loving dog!

He doesn't know how to play. We got him toys and a bone, but he doesn't seem interested in them, even after we show him how to play a little.

We're letting him sleep inside tonight, and he'll be in the house alone for 2.5 hours tomorrow between the time when I go to work and my husband gets home. I 'm a little nervous, but I'd be more afraid of him running loose so early on and getting lost or hit by a car.
show more
7 years ago
dogs and cats
German shepherd/Saint Bernard mix right for me?
We brought him home!!! We couldn't really say no! He grew up next to a farm, so when he saw our month old peeps free roaming in the yard, he didn't even bat an eye lash! Didn't care about them at all!!! He is really scared of, well, most things. He doesn't know how to play- he's one year old- so he just looks at you like you're crazy when you throw a bone or stick for him to fetch lol. He refused to come in the house (which is NOT a totally bad thing!), but ran right out of his collar when we put him on the line. He slept on the porch all night, and was there when my husband left for work at 5am, but when I got up at 8 he was gone!! I searched for maybe 30 minutes, and he came running up the road to greet me- SO happy and SO out of breath! No idea where he went.

Any tips you have would be wonderful. We do want him to be primarily out doors.
show more
7 years ago
dogs and cats
German shepherd/Saint Bernard mix right for me?
My husband and I are just beginning our homesteading skills learning adventure. We rent a house in the woods with 2+ acres, and have 5 week old chickens. An acquaintance is trying to get rid of a 1 year old German Shepherd/Saint Bernard/mut and may have the dog put down because they don't like it.

Our schedules are such that I'm home during the day and my husband is home at night (he goes to bed at 9pm though) and we have opposite days off, so there will typically be someone at "home" to be with the dog. However, our garden (long story) is located a few miles away and I'll be spending a good amount of time there. There is a collie mix at that property (where the garden is).

Would it be a horrible idea to take in this kind of dog? My husband and I have both had dogs before, but I don't know about these breeds. We're going to meet the dog tonight.

In addition, my husband wants the dog to reside primarily outside to guard our chickens (who are currently free-roaming, but whom we intend to eventually fence in.) The dog will be either penned or on a line when no one is home.
show more
7 years ago
dogs and cats
How big does a chicken coop need to be?
I'm expecting 15 pullets in two days. How big of a coop do I need? I intend to provide ample outside space as well.

In addition, I'm currently renting. I want to build my own coop to save money, but I also want it to be semi-mobile so that when we move we can take it with us. We'll be here for at least one more year, but who knows if any longer than that. Thoughts?

I'm new to chickens, so any tips are appreciated.
show more
8 years ago
chickens