Your connection is not private

Attackers might be trying to steal your information from richsoil.com (for example, passwords, messages, or credit cards).

ReloadHide advanced
richsoil.com normally uses encryption to protect your information. When Chrome tried to connect to richsoil.com this time, the website sent back unusual and incorrect credentials. Either an attacker is trying to pretend to be richsoil.com, or a Wi-Fi sign-in screen has interrupted the connection. Your information is still secure because Chrome stopped the connection before any data was exchanged.

You cannot visit richsoil.com right now because the website sent scrambled credentials that Chrome cannot process. Network errors and attacks are usually temporary, so this page will probably work later.

NET::ERR_CERT_INVALID
show more
5 years ago
tinkering with this site

Thoughts on using Roto-Tiller to make small swales.
This is a cool thread. I did the same thing (rototiller and then raking/shovelling to make the berm) and it worked but was fairly difficult. Since then I've seen the BCS walk-behind tractors with a rotary plough. This shoots the ploughed dirt out the right-hand side, allowing you to pile up a raised bed. It could obviously be used to make a swale and berm as well, although you'd need a number of passes to build up the berm.

Has anyone used a BCS tractor? They seem useful cool as a permaculture tool on smaller farms.

Here's the swale I tested this on. Planted with two chestnuts, one black locust and several goji and saskatoon bushes. 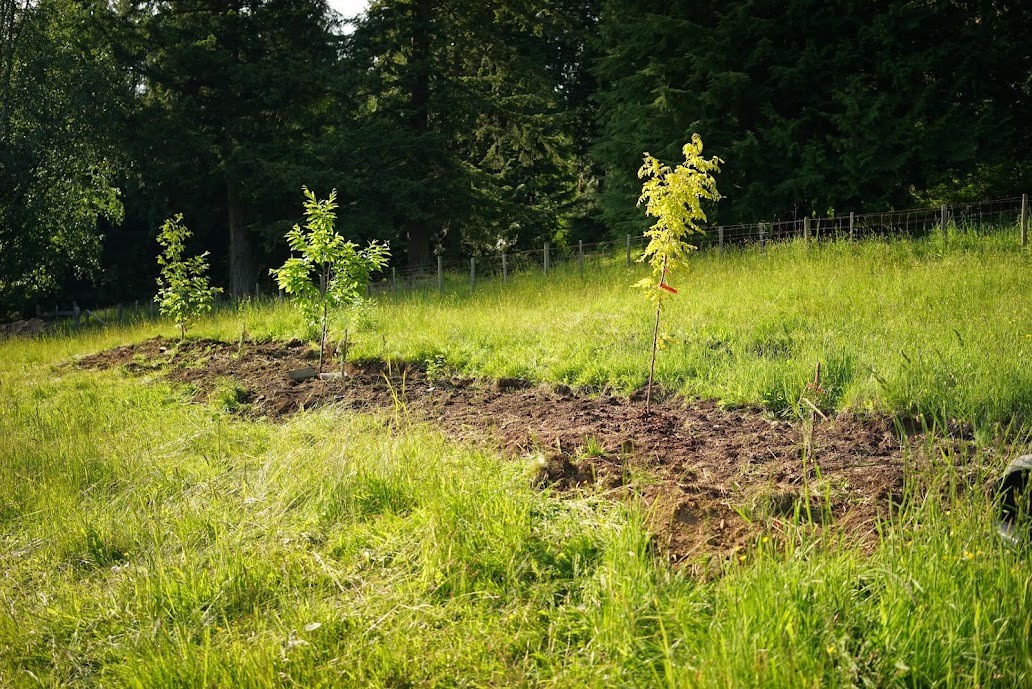 Dave Burton wrote:Lenny, that is a very cool idea. However, I think it would be more useful to grow food forests on clear cut land than to grow crops for biofuel because a local food forest would provide lots of food, habitat, community, and beauty. An interplanting of biofuel crops could provide some of these benefits; I just think food forests are cooler!

I'm with you there, but the areas I'm thinking of are remote and mountainous with limited access. So habitat and community wouldn't be foremost on the list. Growing food still would be though!
show more
6 years ago
woodland
Restoring clear-cut forests

Landon Sunrich wrote:I Watch and walk a lot of clearcuts around here. Seems like more often the not the first thing up in them is a field of foxglove and then the elderberries and salmon berries and alder start popping up in pretty short order. And trailing blackcap and thimble-berries. And hopefully not Himalayan blackberries. I like all of those plants but the. The alder particularly. Though I could definitely see ways of managing regrowth in a way that is much more suited to human production (mowing downs strips of salmonberry et all for alley cropping) and adding in some interesting new stuff (some walnuts here, some hazels there, or whatever) in a way which does not radically alter the established native ecological succession. Unless your in a super wet spot the ceders aren't too likely to pop up right away anyway in the middle of a bright baked clear cut. That's been my observation anyway

Hazels would be interesting. They're native and have fairly high oil content for something like biodiesel. With some breeding for oil yield they might be even better.

I just think that would be so much better than something like ethanol. The idea of using perfectly good farmland to grow fuel is insane. But growing fuel in a clearcut? Maybe that's not so bad.
show more
6 years ago
woodland
Restoring clear-cut forests

Michael Qulek wrote:Ummm, who owns this property? I assume that you are not the legal owner. If some stranger walked onto your land and started planting what they thought should grow there, what would be your reaction?

It's Crown (government) for the most part. I'm not talking about doing anything without permission. As I said, it would be done on long-term leases.
show more
6 years ago
woodland
Restoring clear-cut forests
My property is less than a mile from a clear-cut forest, and it recently occurred to me that we may be able to restore these damaged landscapes in a way that sets up future energy security while preventing erosion on mountain slopes. We could plant strips of nut trees as sources of biofuel, interspersed with alleys for grazing. These lands could be managed on long-term leases, and perhaps at no cost at all given the reparative work being done.

The big drawback is that this would radically alter the native landscape, although I think it could be designed so that native tree species like Douglas Fir and Western Red Cedar eventually outgrow and supplant biofuel crops like butternut and chestnut. I'm thinking specifically of British Columbia here but of course the idea would work anywhere.

It's just a thought at this stage. Seems like a good opportunity. Does anyone have any ideas or concerns?

Ideas for a 4,000-acre farm?
Good point about mob grazing, Alexander. I hadn't thought of that but what you say makes sense given the need to protect against evaporation.

Sadly, it seems my friend is intent on selling the farm. I really had hoped to help him set up a sustainable farm that wouldn't stress the family too much, while helping the planet at the same time by getting away from conventional ag. But that's cool. It's his life not mine.

Ideas for a 4,000-acre farm?
Thanks for your replies. I think the keyline system would be the starting point but I'm not sure where to go from there it does sound like a job for Darren Doherty. I'm sure he's dealt with this situation many times before.

Ideas for a 4,000-acre farm?
Hi. This will probably be a familiar-sounding story to many. An Australian friend is thinking of selling their family farm. His dad is too old to pitch in and there's only so much my friend can do with 4,000 acres.

They have about 170 head and 600 sheep and water is a problem in dry season. It's a conventional, tractor-run farm that uses a lot of fertilizer, etc. Seems like an ideal situation for permaculture and I'd like to help him develop a plan but... 4,000 acres?!

My first instinct would be to cut costs and probably cut production to a manageable level with a mob-grazing approach. For water I think a keyline system would do the trick. But where I'm stuck is, what then? How much can one person do, say, to start an alley crop/food forest system or something like that? Seems kind of overwhelming.

Any thoughts? Thanks in advance!
show more
6 years ago
large farm