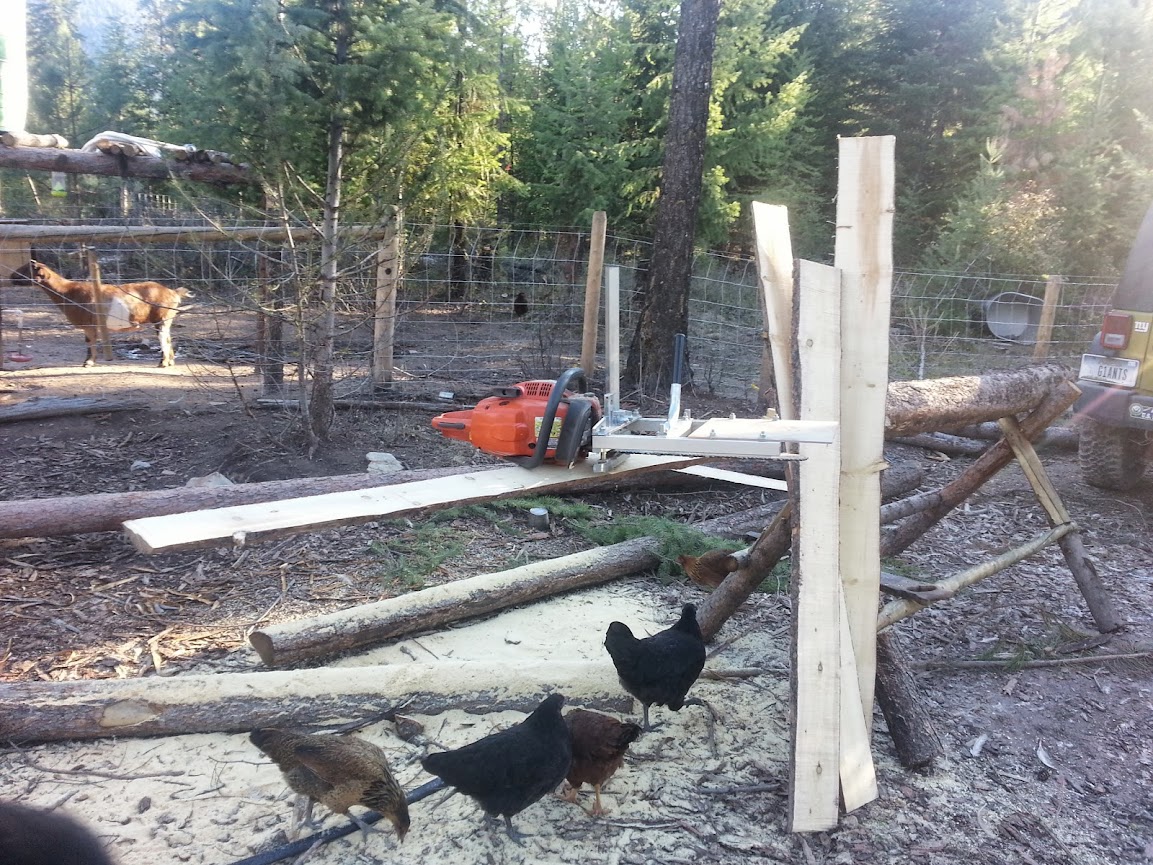 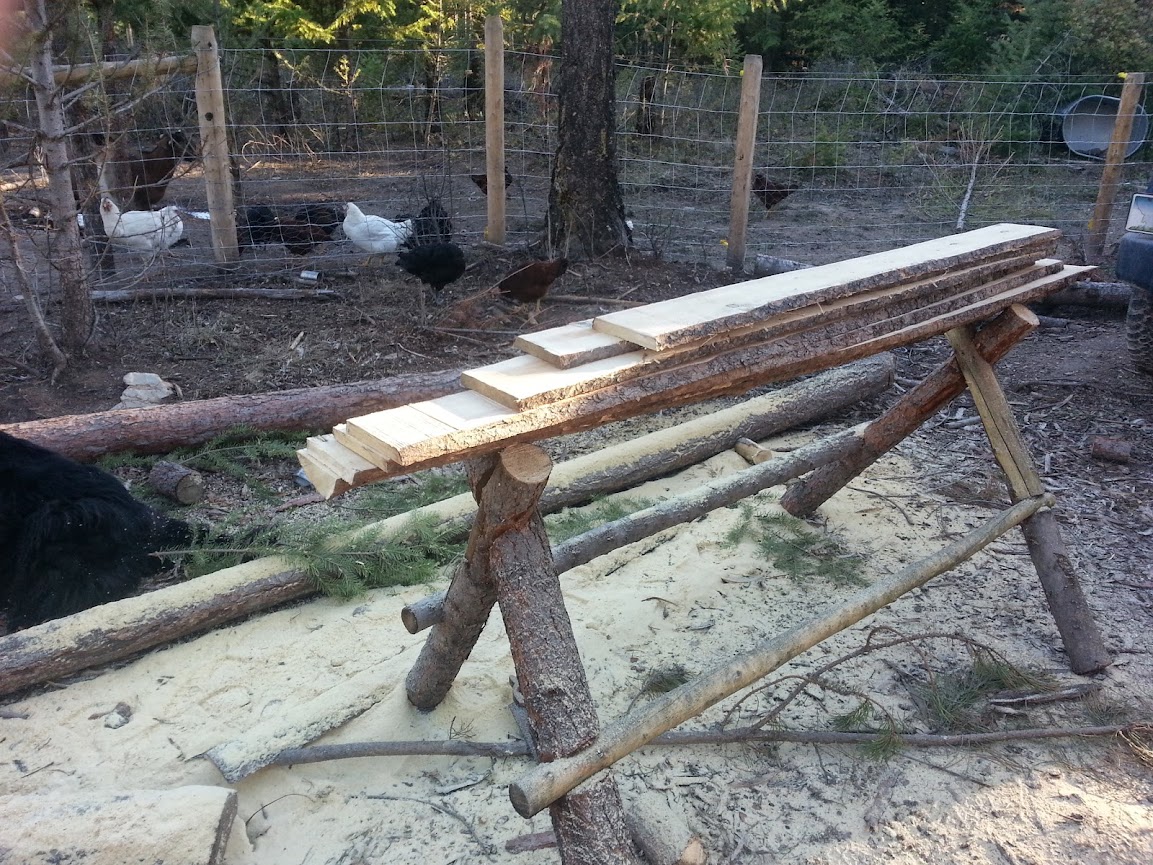 Montana Permaculture Smallholding
Also did more work on the outhouse. While using, the view is awesome, lol.

Miles Flansburg wrote:Looking good Glenn, how are the wife and kids doing in the wilderness?

Thanks. Only one kid still left at home, and she spends part of her time here but mostly stays at Grandma's. Still not sure if she is coming out to stay or not...

Wife helped me all day yesterday and it was good spending the day outside together working!
show more
7 years ago
projects

Montana Permaculture Smallholding
Did some work on the chicken coop. Framed in some openings, put in a door, and finished the rabbit hutch for the 2 pet rabbits we have. In the spring I will fence in a small area below the hutch for the rabbits to get some exercise.

Still have to finish chinking.

Last evening we chased all the chickens into the coop to get them used to sleeping in there. Hopefully tonight they will go in on their own...

The opening to the left is for the goats to go into if they get cold. So far they only go in to eat straw.

ram pump
Monte linked to a youtube video by engineer775. I don't think Monte picked that one randomly. Engineer775 has some of the best videos on ram pumps.
show more
7 years ago
homestead

Montana Permaculture Smallholding
We have a small wood burning stove in the camper. I put a sheet of cement-fiber backer board on the nearest wall, spaced one inch from the wall. The floor has 2 sheets of backer board set on bricks to keep them elevated. The stove goes on the elevated backer board. The stove is about a foot from the wall/backerboard. This all keeps all nearby structures from getting too hot in such a cramped space. Double wall pipe up to the ceiling vent with a regular stovepipe ceiling adapter and 3 feet of triple wall pipe above. This is not really recommended by most people because you can burn your camper down, so that's why all the backer board and double wall pipe. This will be our second winter with this set up and last winter it did fine. I often checked the walls and floor to see if they get hot and they don't. But for the record, I don't recommend anyone put a wood stove in a camper!

The other day I finally got around to building a woodshed. The last few days I've been working on stocking it up.

Montana Permaculture Smallholding
Here is my daughter peeling a rafter for the chicken coop. The goats, they think they are helping.

Montana Permaculture Smallholding
We have a bunch of chickens. They have an acre to range in so they eat bugs and are supplemented a little bit with organic store-bought feed (more so now that winter is coming). Once in awhile when money is tight we get a bag of non-organic food.

We have about 30 layers, but also some meat chickens. I've slaughtered a bunch, but still have 4 left.

Here is the home-made chicken plucker that I built.

Montana Permaculture Smallholding
When living in a camper in the woods, the question comes up: what to do with your waste? As in, poop and pee.

I've been keeping all the valves open and we were just dumping onto the ground. We didn't poop in the camper because ya can't just mix poop with pee and dishwater and dump it on the ground. I don't think dumping sink and shower water and pee (in the amounts that two people put out) on the ground would do any harm. However it did begin to smell after awhile, so I thought I should do something.

I have Art Ludwig's Greywater Oasis book and had been studying up on greywater disposal systems. Basically you divert all your greywater (sink, shower and pee) to pits filled with wood chips. This is environmentally safe, as the wood chips react with the pee to create some biological action that breaks down the nasty stuff. I did something different for my greywater.

I've already made a separate post about my Pee Beast. I dug a 2 foot deep by 2 foot wide hole. I didn't have wood chips but I had plenty of tree bark from building the log cabin chicken coop. I ran a short PVC pipe to from the camper drain to the hole. Then I covered it up with the top part of a 55 gallon blue water drum I had lying around. I sealed all cracks with dirt and crumpled up a fir branch and stuck it in the hole on the plastic drum to act as a screened vent. Its been about a month now and there is no smell, even if I pull the branch out and take a big sniff. So I think its doing the job.

But we don't poop in there. So I'm building an outhouse with a composting toilet inside. I've already made the pooper, but the outhouse isn't finished yet.