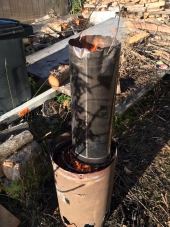 Another homegrown improvised biochar kiln
Hi permies,
We have always made small scale wood and bone char in the woodstove, but we had not found an easy way (been too lazy) to convert the abundance of dead branches of the black and white spruce that surrounds us into biochar.  With the heavy fire year of 2019 in our area, we have been even more aware of the need to thin and remove some of the wood debris, especially from the highly combustible spruce.  Spruce is also resistant to rotting and will dry out rapidly after even heavy rains.  This is great for survival fires but not so good for wildfire.
Living in a semi-suburban area, we did not want the heavy smoke of a trench burn to make the biochar and lead to an impromptu visit from the fire department or annoyed neighbors.  However, many neighbors are already having fires in the fireplace with the smell of wood smoke in the air, and as long as it is discrete, a clean fire would go un-noticed.  So at least as a proof of concept, we used a section of the triple wall prefab metal chimney, the type that has removed millions of BTUs from American homes for decades😉. This is a frequently available modern debris.   The two outer layers are galvanized with a stainless liner.  This one had the inner stainless removed by us for salvage and the intact second layer has an ID of about 11 inches and a height of 22 inches, so a volume of about 4 ½ gallons. The holes cut in the bottom were to keep a little more cooling air moving along the inner layer.  (Really, they were a hare-brain attempt to add oxygen and reduce smoke that did nothing)
The bottom is pressed into the ground to “seal” and filled with 12-14 inch-long sections of 1-2 inch branches stuffed in tightly and in a vertical orientation—this was the key to efficiency.  There is no air inlet in the bottom sealed with dirt.  Small sticks and branches of the sort that easily break by hand are stuffed on top of the large vertical branches more loosely and ignited. This lets us deal with the thick ends of the branches and uses the small outer branch to cook them to biochar.
This first attempt resulted in the sort of smoke that would draw attention from outerspace but when the inner liner was rested on top of the frame that support the liners, there is a powerful draft that burns cleanly and pulls down air from the top intensifying the fire and speeding pyrolysis. This “chimney” sits loosely and can be removed to continue to reload, which is done repeated to complete the burn.  The lower part of the chamber remains oxygen-deprived by the roaring fire above but the heat causes almost perfect pyrolysis. The small branches falling below are stopped from complete consumption by falling into the oxygen-deprived zone. The upper fire consumes the wood gas and burns cleanly, just needs to be reloaded as fast as possible.  The amount of ash that is produced is negligible. Our usual mistake is to stop a burn (hose it down) too soon and need to reburn some of the larger pieces, oh well.  The kiln is small but it has been surprising how much can be cleaned up in a single burn, and it uses both the big and little ends of the branches. Now we just need to find a use for the waste heat! Right now, it’s our fire pit. The best burns have generated a couple of gallons of biochar but we are still learning.
This improvised kiln was intended as a proof of concept only but makes very high-quality biochar that after quenching shatters to a small size with minimal force.  If this is done right after the burn when still wet, dust is avoided.  It also does well with spruce that past experiments have reduced into more ash than biochar! If time and work allow, we will probably scale up modestly to see the limits of top-load-down-draft with a fire generated oxygen-depleted zone.
I admire the many sophisticated designs that are being developed and am only  a little embarrassed to present this, but sometimes one person’s trash is a permies stealth biochar kiln.

show more
5 months ago
biochar
Help growing pumpkins/winter squash
Hi Eric,
I'm pretty certain you are describing a pollination problem. Even with lots of pollinators in the area, if the correct pollinator isn't there, the pumpkins and squash won't get pollinated. Temperature also affect the predominance of male vs female flowers, adding to the complexity of the dance. In the past two years we have had a significant drop in appropriate pumpkin/squash pollinators in my area, despite having lot of bees and flies. I had to hand pollinate essentially all of my pumpkins and squashes last year in order to get any fruit.
show more
1 year ago
plants
Fast fruiting wine caps!
Eric-Glad you're growing these babies. I love that here we can have our cake and eat it too: make awesome compost and eat the mushrooms. We now have wine caps popping up on all our paths after a good rain. We inoculate the aged wood chip pile with SRA spawn, then apply wood chips on all the paths. As long as we add fresh wood chips about yearly, the SRA mycelium continues to grow. Periodically we harvest the compost produced in the paths and continue the process. It does make great compost!

Steve-the SRA mycelium will eat the oyster mycelium given the chance.
show more
1 year ago
fungi
Fast fruiting wine caps!
Joe, the really amazing thing about wine cap mycelium, it it's ability to out compete all the other fungi. It eats them. So no need to pasteurize the area to be 'planted' with wine cap inoculum. We use well aged wood chips from anything other than pines of spruce. The wood chips have lots of other species of fungi, but, no problem. We get lots of wine cap mushrooms, sometime some other species fruit, but it's not an issue.
show more
1 year ago
fungi
Oyster Mushrooms
Oysters grow on many substrates. We use sterile grain jars to maintain and transfer spawn. We grow oyster mushroom on straw mostly. Cheap and easy and local. We also like alternating fresh coffee grounds with hydrated cardboard and a high spawn rate in buckets with holes. Some people use hardwood fire pellets. Agricultural waste produce are used worldwide. Oysters grow on almost anything.
show more
4 years ago
fungi
looking for wood pellet micro CHP (combined heat and power) system in USA
There are issues, but for Norther climates; it is feasible and about 30% efficient. http://www.cchrc.org/sites/default/files/docs/Combined_Heat_Power_report.pdf
show more
4 years ago
alternative energy
Fast fruiting wine caps!
Shaggy mane are delicious. They should be great in your area. Should also be wild. They are often in disturbed areas and in lawns.They are very watery, so need lots of cooking to evaporate the liquid, but are the best in cream of mushroom soup or in stroganoff. We also failed to get blewits to grow from spawn.
show more
4 years ago
fungi
Fast fruiting wine caps!
Love to see some pics Steve. Here are a few from our garden last summer. Wine caps are pretty sneaky, found them a long ways from where they were "planted", but we have wood chip paths and mulch almost everywhere and now all mulch is inoculated with wine cap spawn (just add in the well run wood chips). Also phot of the oyster added to the straw mulch in garden beds and the shaggy manes in the compost that pop up every fall when the temps drop and the rain comes.
show more
4 years ago
fungi
Fast fruiting wine caps!
That's great. We too have spread wine cap spawn throughout the garden. Mushrooms everywhere. We are also using a well run bed of wine cap mycelium as a treatment for the road runoff.
show more
4 years ago
fungi
Fast fruiting wine caps!
Hi Corey,
We grow Pleurotus ostreatus, primarily the gray variety. It does well in the temperature ranges we have during the summer/fall and does well in indoor cultivation as well.
show more
4 years ago
fungi