I messed up. Can we fix this?
Would it be worth getting professional help? A friend of mine and used a company called Green lawn care I think, these guys http://www.greenlawncare.net/locations/Pennsylvania.html They come and do an evaluation, they also use natural fertilizers too, all animal/plant based. I think chemical fertilizers will have quick results but natural ones are much better in the long run and your OH will see this in the end. It's just a matter of being patient.
show more
7 years ago
lawn
All time favorite films
So many films I could mention, it depends on my mood, on whether I want to be entertained or educated, or both.
I recently saw Melancholia, a Lars von Trier film, the opening sequence alone is just beautiful. It's kind of a disaster movie (which appeals to my love of 70's disaster movies Rion Mather) about a meteor heading towards earth. Have a look at the opening on youtube as I can't even begin to describe it.
Another film I saw recently for the first time was Apocalypto, the Mel Gibson film about the Mayans.
Apart from those I love old Hitchcock films, David Lynch. Not a great fan of Woody Allen, apart from Vicky Christina Barcelona.
show more
7 years ago
art

Moss art
A friend tried this, can't remember the exact measurements but she basically mixed up some moss, some buttermilk, water and sugar and painted it on the her garden wall. A toxic free alternative to graffitti 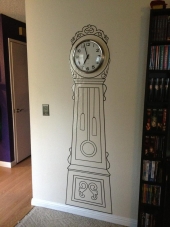 Grandfather clock the frugal way
I love this, very simple but great effect. I saw something similar on another forum where someone had done a Trompe l'oeil grandfather clock, can't remember which one so can't post a pic but it even had a little mouse sat in it.
show more
7 years ago
meaningless drivel