Jesse Fister wrote:Alright.  Thank you for all these replies.  I am starting to formulate a strategy in my mind.  Let me rephrase:

Pig nuking is a last resort method that will work well.

Hand weeding should be easy in new soil.  We can plant Nasturtium to out-compete the grass over areas we can't manage this coming year.  Over the whole garden if necessary.

To plant, we should add some good soil in little pockets or rows, along with the seed, then mulch around it.  Big leafed vegetables like squash and potatoes will help us shade out the grasses coming in.  Start with potatoes first.  Smaller herbs and vegetables may be more difficult to deal with, may require more hand weeding, and a careful eye to see what's growing and what isn't.

We should add compost pockets at intervals into the garden to aid the worm community.

What should I be adding as new mulch?
Is new mulch even necessary with all the bio-mass we have in this garden?
Does it ever work to just drop a seed into what's already there, without adding new soil/mulch?
The neighbor has a big supply of mature raspberry plants.  How should we transplant them?

I like the sheet mulching idea. I would have done it different. I would have covered it in the mulch, (2 inches deep of woodchips, 5 inches deep of straw, etc), even if it was a few inches only the fact that you put dirt on top of the sheet mulching gave way for small seeds to grow in. The main points of mulching in general is to warm your soil, maintain moisture and reduce the amount of weeds that can grow. Your weeds are rooted in the soil on top of the cardboard.
There’s an old book, the woman is passed away now, but her name is Ruth Stout, “The No Work Garden”. She suggested at least 10 inches of any kind of mulch would not give way for the upper levels for the seed to grow. That is the philosophy I’ve used in my garden. It has gone well for me. but the sheet mulching seems like a way that it would reduce the need for so many inches of mulch but I would not add soil. Adding rocks to weigh down... gravel or other mulch on top to keep it from blowing away would be my suggestion.
To sum up I would just add one more cardboard layer and one more layer of mulch. Make sure that when you go to plant that it’s been well watered in that area the cardboard will be easier to perforate
show more
1 year ago
missoula 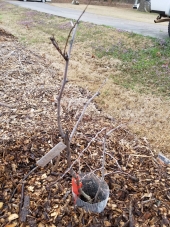 Steve Thorn wrote:I was driving out of my driveway this morning and noticed my neighbor's blooming pear tree that had blossoms on one small area opening, but the rest hadn't bloomed yet.

Under that section of the tree there was a brush pile about 5 ft  high and wide and 10 ft long.

It appears that the brush pile my have created a warmer microclimate that caused the blossoms above it to open before the ones on the rest of the tree.

I have some Japanese plum trees that bloom very early in the year and almost always get hit hard from late frosts, but I keep them to hopefully be able to save the seeds from them and develop varieties that bloom later. I was thinking that this observance above may be a way to help keep the the area warmer on cold nights to minimize frost damage.

I agree that the mulch  being darker could absorb heat that can help the area be warmer. Another factor that may come into play is the fact that when you have organic matter being digested they create heat. Also, mulch being much lighter than dirt and having more air pockets, has a much greater R-value keeping the soil from getting cold. For instance, 4 inches of concrete has only about half of 1 R-value, while wood has an R-value of approximately one R per inch. If it was rotting away It would go more spongelike thus increasing its R-value even better than solid wood plus it being wood chips already has a lot of air gaps so it definitely is going to keep your ground much better than plain dirt.
When I was young in an agricultural community that I grew up in, one of my neighbors harvested hay. It had been recently rained on his hay. The moisture in the hay caused it to mold and invited a lot of heavy bacteria to live in it.
He mounted it up in his barn and as time went on that moisture in the hay made a perfect place for it to start molding and rotting away. The heat given off by the moldy hay was enough for it to auto combust and burn down the hay in the barn.

Also there is a gentleman, I believe he was out of France, and he would use hay piles and mulch piles  of wood chips that were built over coils of poly propylene tubing and had water pumping through the tubing. With enough of the tubing touching enough mulch, it produce enough heat that he did not need to do anything else to get his water hot. And he used it to heat his home by pumping the hot water into his home into a radiant floor type system. He also used it for his domestic use needs for hot water.
show more
1 year ago
mulch