Do I have a bad battery?

What is it that you leave on all night ?

yes.
Basically, fridge (about 35w), UV light for water purification (25w), a few standby things and of course the inverter standby consumption (which I cant see but from my research I estimate to be around 40w). So around 100watts per hour for 10 hours
show more
8 months ago
solar

Do I have a bad battery?
ah, forgot to mention that I have SEALED lead-acid... so no checking levels or adding water :)
show more
8 months ago
solar

Do I have a bad battery?
Hi folks,

My solar system is acting really weird. I got 8 seal lead-acid 12v 260ah batteries (2 groups of 4 for a 48v system) in order to have a good safety buffer for cloudy days. It turns out the performance of these batteries is like 10% of what is advertised. I'm not sure if one of them might be faulty and is harming the whole system.

I tried measuring each one with a multimeter, but the only difference in voltage I get in a particular battery is only of 0.05 - 0.1V. Is this significant? All others have only a 0.01V difference (more or less). Of course this is with load and everything still connected together.

Is it worth to unplug everything and measure each one disconnected?

If not, any tips of what my problem might be? The batteries have only 2 months of use and they were brand new... In sunny days I get them all charged up, but then next morning, without barely any load at night (1kwh total max) they go down to like 60%... :(
show more
8 months ago
solar 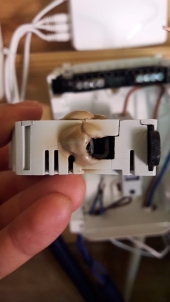 Even though my system is installed and working for many months, I've only started living off-grid full-time for about 2 weeks, so now I'm making the real tests!

I have 6 panels, 2 parallel groups of 3 panels each (in series). Each panel is 320W, with a max current of around 8 amps.
I have wired each group with 4mm wire (which is more than enough for 8amps), up to the 20A fuse, which then connects to the inverter/controller with a thicker wire.

Yesterday there was a very cloudy day and the batteries took a beating, and today there was a very sunny day. So since early morning the panels were outputting their max (but still far from the rated max).
After a few hours constantly with full sun, I started to feel a burnt smell and a few minutes later the inverter beeped signaling no power coming in from the panels.

First thing I checked was the 20A fuse box. I have one 20A fuse for Negative and one 20A fuse for positive. The negative fuse was blown, but not only that, the incoming wires from the panels were very dark and the plastic of the fuse box was even melted! These seems to suggest a significant overheat... which I don't understand why it could happen since everything was sized appropriately... (or at least I hope...)

I attach a photo of the fuse box.

any ideas on what could be the problem here? I'm going to get 4 fuses instead of 2, and connect each wire to its own fuse... even though the 2 groups together should not exceed 16amps as per the specifications of the panels...

show more
9 months ago
solar
Any tools to help manage a homestead project?
Hi everyone!

As an IT person currently starting an homestead, I find overwhelming the number of tasks, projects, ideas, reminders and just general knowledge I acquire every day! I'm used to use many different tools to manage work and life, like task management, note taking etc.

However, I also like small, simple and very specific and centered tools. So I was wonder, would it be interesting to have a tool specific for homesteaders?

Based on my own needs and experience so far, this is the kind of thing I would love to have in a tool:
* seed/planting calendar
* tracking plants/crops/livestock growth (perhaps notes and pictures included)
* tasks and reminders
* note taking by topics (eg. things I learned today about growing mulching)
* something energy related (i'm building my own solar pv system offgrid)

What do you think? What would it need to do to be very useful to you and your homestead? (and by very useful I mean that you wouldn't mind spending a few bucks a month to use it)

Thanks for your help!
show more
1 year ago
homestead

frank li wrote:Make sure protective earth is terminated with all equipment on one end and the ground electrode(s) on the other like a tail poked in the ground and it will be safe as can be so long as it has ground fault protection.

Yeah I have a big rod where the ground wire connects to, on the other end of the wire it connects to a bus bar on my switchboard, where all other ground wires (coming from sockets and etc) will connect to.
show more
1 year ago
solar

frank li wrote:I get it now. All should be fine. Just make sure you land the terminals with the right conductors indicated in the manual. Its like split phase no neutral. Except the ground. The ground is neutral. Do not short your inverter.

So if I understood your reply correctly, there's nothing I should be doing differently and these readings are ok?
show more
1 year ago
solar

frank li wrote:Is it that your lines are split between services? Ther is something im not getting. I am unfamiliar with european electrical. Still.

Do you have 2 conductors and a ground?

I dont have any "services", its fully offgrid

AC output from the inverter is Line+Neutral.
show more
1 year ago
solar

frank li wrote:What inverter do you have in place? With some inverters you will have an odd response.

It's an Axpert 5kva. Not sure if I should bond ground and neutral too... the manual doesnt say anything about grounding :/
show more
1 year ago
solar

frank li wrote:You can get that anywhere the line is loaded. If you open a switch or breaker feeding that line, there should be nobody home.

but shouldnt hot to ground be the same (or nearly) as hot to neutral?
show more
1 year ago
solar