Peter Ellis wrote:Linsey [sic], the point about seeds is exactly that seeds are not how apples are propgated. So it was disingenuous for them to say that the chaacteristic won't be carried on through seed. To then say that apples are grafted, but say nothing about the traits being carried through the rootstock systemically - well, that is further misrepresentation.
I don't know whether grafting this stock onto a tree with three other varieties is going to pass those traits on to the other grafted varieties, but that is a real concern that I would like to see addressed.

As to out competing versus regulation - that does not help if something gets out that contaminates your entire ndustry.

The very real problem with these developments is that they can have unforeseen and unintended consequences. Some times it is not even that the consequences are unforeseen so much as that the people pushing a product simply do not think about possible downsides. There need to be adequate regulatory safeguards to prevent introduction of GMOs that have negative envirnmental impacts. I am skeptical as to whether they are in place.

Another thought. Our governments are coming up with regulations that bar "invasive species", Entirely natural organisms, often quite beneficial, but not from the local area are being targeted for destruction. Yet GMO corn, that freely contaminates open pollinated corn, destroying cultivars right and left, is legally protected and the injured farmer has no right to protection from this truly invasive species.

You are talking about gene flow, I assume. I think that there are definitely problems with gene flow when it comes to wind-pollinated cereal crops, and GM tree crops whose pollen can travel thousands of kilometers, but I'll say it again: apples are a different beast.

I am at no risk from these apples, and neither is any other apple breeding program. Apples aren't really bred from chance seedlings in the modern orchard industry: I still plant from seed, but that's because it's my hobby. If a cross between two cultivars is to be obtained, it is manually pollinated and kept under sterile conditions outside of an orchard context. Seed isn't obtained from orchards, but from breeding programs. Sometimes strategies derived from modern genetic science--like Marker Assisted Selection --are used in selecting seedlings. The ROSbreed program is doing just this. But again, apples are not bred open-pollinated at the site of fruit production; and rootstocks, by their very nature, and not used to produce reproductive parts!


Peter Ellis wrote: To the best of my understanding, this is something that has never been true with plant grafting before. Grafting Macintosh scion wood onto crab apple root stock would not systemically convert the crab apple to express the macintosh genetics.

You are wrong about that, as I stated above. Though the rootstock/scion won't completely convert to one or the other, traits like disease resistance, dwarfing habit, flowering times, and branching patterns can be expressed between scion and rootstock: this is one of the main benefits of grafting. I don't see how emphasising that the scion interacts with the rootstock is necessary, or a misrepresentation: if you are a person who knows something about fruit cultivation, this is a given. The general public doesn't know what 'scion' and 'rootstock' mean, so I can't see why this information would be in any press releases about the plants.

show more
5 years ago
toxic gick
Arctic Crisp apple approved
Well, it is both natural/ancient and revolutionary: it has been going on organically (as has lateral gene transfer) since before bacteria, archea and eukarya diverged (3.7 BYA) as a novel evolutionary strategy to RNA disease resistance...

... but the technology to manipulate it intentionally is new and revolutionary.

I did find a paper that confirms RNAi scions pass on characteristics to rootstocks: but it doesn't negate the point about seeds: apples are not bred from the seeds at orchards (and hardly ever bred from seed). Even if the RNAi affects the rootstock, no one is propagating plant germplasm from orchard rootstocks, via seed or otherwise. I breed and bank heirloom apple germplasm, so I'm reasonably familiar with the industry.

And this is not at all unprecedented! Rootstocks pass on things like disease resistance, vigour, fruiting time, and even branching characteristics to scions. Though these plants are not graft chimaeras, they have fused vascular tissues, and thus share nutrition, water, and cellular information.

Even after a lot of these things make it through approval, it is years before they are commercially cultivated, and they can be continually evaluated after approval. Many products that make it through initial review processes are recalled if they are proven to be dangerous.

I also don't think preliminary testing programs are neccessarily adequate, but certain problems are almost impossible to anticipate, and GM crops face a whole lot of extra scrutiny, so the process is extremely costly. There could be problems down the road, but something as minor as a change in enzymatic browning probably won't cause an entire ecosystem collapse, so those problems can be dealt with if they arise.

I think my point still stands: if there weren't a market for it (a "pre-sliced apple market," I shudder merely at typing that phrase), these crops wouldn't exist. My solution is to pretty much just keep on doing what I am doing, which is growing and breeding heirloom apples, and get more people interested in that.

I'd rather out-compete these crops than regulate them to death: if permaculture/organic really is better, than we need to pony up and show it in the marketplace.

show more
5 years ago
toxic gick
Arctic Crisp apple approved
Where did you read about the scion interacting that way with the rootstock?

I write about GM crops with some regularity on my site , and so far I've written two pieces about the arctic apple you can check out.

It's not the worst crop I've seen by far: it's being called "genetic engineering lite." There are certainly some problems that may arise down the road (ie. nontarget genes being affected by the RNA interference), but my biggest objection to the two apples they've developed it that they're for the pre-sliced apple market, which is capitalism at it's absolute worst.
show more
5 years ago
toxic gick

Jennifer Smith wrote:I have some onions for you! They are of the walking or Egyptian type. I got then from a friend who was still growing them on the family farm that has been the family farm for generations. Goats love them and they are sweet and yummy in fried taters. And boy do they multiply with just a little effort.

I would love to add them! Any info you have on them would be much appreciated (name/history/cultivar/landrace etc.) I try to do my best to document the histories and botanical data on any plants I am banking. 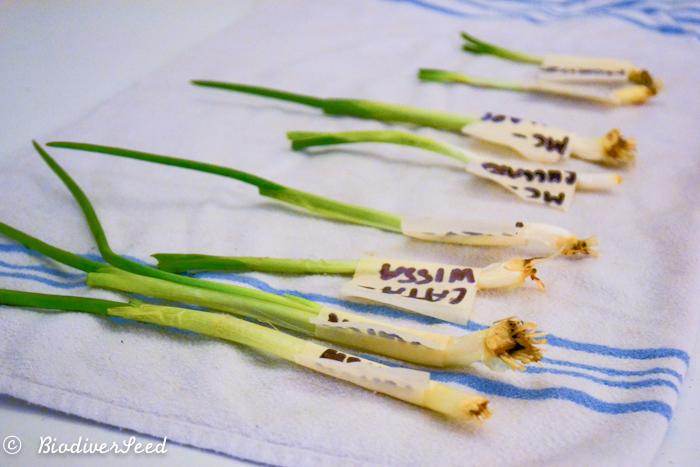 Here is the information I have on the Catawissa Walking Onion, for example:


cv. ‘Catawissa’: “A Catawissa, Pennsylvania, nurseryman by the name of F. F. Merceron (little is known about this individual) engaged in improving the tree onion for commercial purposes. His strains are somewhat different from the others because they send up topsets from topsets, creating the image of plants growing out of plants. He developed three distinct strains of tree onions, a red variety (which I have), a white, and a yellow. Alexander Watson mentioned these strains in passing in his American Home Garden (1859, 159), noting that by then the onions were already being sent in large quantities to northern markets from Bermuda and the South.” Read More

I would be happy to swap if you are interested in anything I am growing. I have some Babington's Leeks, which might be right up your alley if you like the Walking Onions!

Email me at biodiverseed@gmail.com and we can swap

Rare Perennial Onions - Group Purchase
I have something of a seed and germplasm bank growing here in Denmark, largely due to the seed swap network I've created over at BiodiverSeed.com.

I was glad to see that so many people here at Permies were interested in the free Paw Paw (Asimina triloba) seeds, so I thought I would post another project going on at the site right now.

I currently have around 10 species/cultivars of perennial onions growing here, and I would like to add 8 more species/cultivars. I currently have Egyptian Walking Onions, Bunching Onions, Wild Garlic, Babington's Leeks, Round-Headed Leeks (Drumstick Onion) and a number of Ornamental Alliums. I would like to add more Tree Onion cultivars, more wild onion/leek/garlic species, Rakkyo Onions, and Potato Onions.

I have set up a gofundme to purchase divisions of 8 additional perennial onion species from private sellers. As a "thank you," donors can choose from among the species/cultivars I already have, or the ones I purchase: a $5 donation = 1 species, and so on. I will send you a package with bulblets after I make the purchase.

I multiply the offsets, and send them out to permaculturists around the world regularly. I've sent Walking Onion bulblets to dozens of people in the seed swap network for the cost of postage in my first year of cultivating them. They are a great investment: I started out with 4 McCullar's Walking Onions, and including those I gave away, ended up with about 55 at the end of my first year. Hopefully some of you consider it: a $25 donation to the germplasm bank lets you get started with 5 diverse perennial onions this spring, and you are of course welcome to request more divisions down the road once I establish them!

I've had a great response from folks on this forum, and I will be emailing all of you with more data.

I've set up a survey form where you can make a seed request:

FREE Paw Paw (Asimina triloba) seeds, anywhere in the world
Nope! I am just collecting germination data, which is anonymised through a survey. You can also opt in or out of doing the surveys.
show more
5 years ago
plants

FREE Paw Paw (Asimina triloba) seeds, anywhere in the world
I have set up an exchange for free Paw Paw seeds from the Kentucky State University Paw Paw Program:

To receive 10-30 free seeds, email me at biodiverseed@gmail.com with your address.

I am recording germination data over 1-2 years. There are around 150 gardeners around the world participating so far.

show more
5 years ago
plants
pawpaw seeds
I have set up an exchange for free Paw Paw seeds from the Kentucky State University Paw Paw Program: email me at biodiverseed@gmail.com

I have a tonne of rare edibles: seeds and germplasm, which I am happy to exchange.

I have one kind of wineberry, but I would like to get two more stem cuttings to cross-pollinate/increase genetic diversity.
show more
5 years ago
plants