You mean this Knife Sharpener?

PTJ Event 2022 - Spinning Wheel from Bike Parts
You folks are absolutely amazing. I read a lot but again you are miles above me. I wondered what language you were speaking. That is how far above y'all are. Not too many other comments except from you pros. Again an indication of how PRO you are.

I think I am going to enjoy trying to understand this, NO, some of this!! A etsy bitsy tiny shred of this. 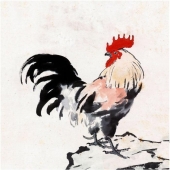 As a complete novice I’ve had to look up definitions frequently but overall it’s been understandable so far.

Just Do It!!, Jeff. Can you, can anyone in your state get a permit to cut timber? Get one. Cut small logs and build a doll house or a larger one you could sell as a super attractive garden shed/ yard storage shed. By the time you have built your tenth one you should have a decent side business selling these and you will be WELL ON YOUR WAY to doing something larger, something someone can live in, maybe not you but someone and you will have taught yourself a large number of VITALLY important lessons and how to timber frame.

By the tenth one you could be building the one on the cover of the book you showed in your post!!!
show more
2 weeks ago
roundwood and timber framing 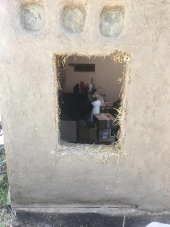 Matilda Hernandez-Miyares wrote:... . Project was straw-slip packed between dimensional studs, was a good learning process, though I don't think I would use the technique again.

Could you just write a few short thoughts about why you "don't think I would use the technique again", Matilda?
show more
2 weeks ago
natural building

r ranson wrote:In the summer, I do my laundry in the garden so I can use the greywater to water the plants

Does your greywater get any filtration done to it before it waters the plants? Does your laundry use electricity? Do you just run an extension cord? Is the machine covered for whatever rainfall you do get?
show more
1 month ago
home care

make your own miso at home
miso dai suki dayo!

Has anyone made/eaten shiokara - salted, fermented squid guts? Prolly hard to get the necessary ingredients. I know it sounds awful but it actually is incredibly delicious. Being a not at all fussy westerner as regards eating new things I just couldn't go there with shiokara for many years in Japan. Then one day I was at one of my favorite Izakaya [bar with small tasty dishes] where they always brought the customers a little food treat/hors d'oeuvre when you arrived, as well as a hot wet little towel to refresh - such service in Japan!!! Anywoo, I gobbled down the always delicious hors d'oeuvre and it was so delicious that I said to the stranger next to me, "suimasen, kore wa, nan desu ka" [Literal: Excuse me, as regards this, what is it?] He says, "shiokara desu".

I just read that it can also be made from not only viscera/guts but also little cut up pieces of meat so I guess that it could also be made from just the squid meat. I wonder if other non asian countries also make this. I believe it is also made in Korea and China as these countries have had each other mixed up in each others business for centuries.
show more
1 month ago
fermentation

r ranson wrote:In the summer, I do my laundry in the garden so I can use the greywater to water the plants (we have a long summer drought).

EDIT: There are plastic ones and also stainless steel ones for around the same price in the $15 range.

Found the about 24" x 16" Japanese socks/small items racks, links for Amazon for the canucks like R Ranson and for US permies. These things are fabulous, collapsible, UV does get them over time but mostly just the weaker parts which are the NB parts, the clothespins. So putting the out of UV rays gives more life.

Most of the retractable racks I've met are pretty chintzy. Have you seen pictures of the Japanese-style system? It uses long polls held on a rack. If the ends of the rack were on opposite sides of your walkway, you would install the poles only when they were needed and lean them against some convenient wall when not needed.

I used this system when I lived in Japan. Like many things Japanese, FANTASTIC! The poles stayed permanently outside on a rack that was attached to the house/apato [apartment] so you opened the patio door and there were the poles to hang laundry on.

I have been looking for the plastic hanging things, blue thing on the left side of Jay's pic, since I moved back. Has anyone got one? Does anyone know where to buy such an thing? 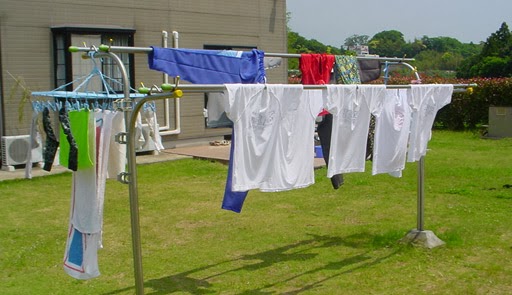