Grafting European hazels onto NW native hazels
Does anybody know if European Hazels (Corylus avellana) can be successfully grafted onto the native PNW beaked hazels (Corylus cornuta)?
I have a bunch of beaked hazels that I'm probably going to remove (yes I know they produce edible nuts, but they are few and far between and rather small), but was thinking of trying out grafting the Eur. hazels onto those already existing root systems.
show more
4 years ago
trees
Nitrogen fixation and actinorhizal plants
Could anyone shed any light on the relationship between actinorhizal plants and their relationship with the Frankia genus of bacteria that they interact with. Alders are probably the most well known species that fix nitrogen in this way and if you dig up an alder root you'll almost always find root nodules that are hosting the Frankia bacteria. But everything in the Elaeagnaceae family (which includes seaberries, goumi's, autumn olive, silverberry, etc.) also rely on this bacteria for nitrogen fixation. So my question is, do you need to innoculate your soil with Frankia bacteria in order to get the nitrogen fixing benefits of the Elaeagnaceae's or will they some how find it in the soil? I've had mixed results looking at root systems that are grown in a "sterile" medium. Also, would inoculating these plants with soil from underneath alders be effective in getting the Frankia bacteria to their roots?
Also, while Robert Kourik is here, could he provide some insight on the controversial role of nitrogen release from N2 fixing species, such as when is the best time to chop and drop, the different methods of N2 fixing for woody vs. herbaceous species, or any N-fixers that he finds particularly useful in terms of the fertility they release.
And while we have Mr. Kourik here, could he give his theory on the roots/understory of conifers, advice on growing underneath the crown of conifers, etc.
Thanks for visiting permies Robert!
show more
4 years ago
plants

Community Gardens
Parks and Recreation departments are often great resources as they have lots of land covered in lawn that could easily be converted to community gardens, although that may be more appropriate for urban/suburban settings. In terms of donating food to people in need, it is often helpful to have some sort of food preparation infrastructure. Many food shelves don't find raw produce helpful because it spoils fast and isn't "ready to serve". So including the food prep into the community garden system can be very helpful. Also, if you need seeds High Mowing Seed Company gives very generous donations to projects such as yours. All you have to pay for is the shipping. Good luck!
show more
5 years ago
intentional community 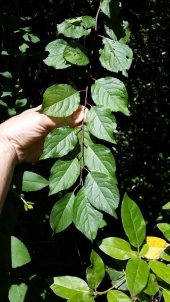 Fruiting Tree ID help!
I found this in a weedy shrubby area along a driveway here in the Portland, OR area. It is currently producing fruits and I split one open to find it had one large pit in the middle. The tree is about 20 feet tall. Hard to get a good pic of the full structure as it is tangled up in Himalayan blackberry and other shrubs.

Hickory ID?
Looks like hickory. If you're in CT it's likely shagbark or bitternut hickory. The leaves look more like shagbark hickory to me, which is great for you because those hickory nuts are far tastier than a bitternut. Once the little tree puts on buds you can tell for sure. Do a google image search of each species buds, but bitternuts are a dead give away because they're yellow and smell exactly like a gin and tonic, no joke!
As for best time to transplant, wait until the fall when the energy is in the stem. This is just before the tree sends a ton of sugars down to develop a deeper root system and is likely to be your most successful time to transplant. And I've had the most success with what some call the Sepp Holzer method, but you basically just dig a large square around them and go really deep so you get the desired plant's roots along with any other surrounding plants and then transplant that whole chunk of soil, roots and above ground parts to your desired location. You can weed out or mulch the other plants once the trees are established.
show more
5 years ago
trees 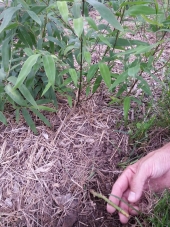 evan's ant village log
Hey Evan,
Any book requests that some of us permies could fulfill for you? Assuming you have time to read once the sun sets

show more
5 years ago
wheaton laboratories
how to best utilize a SMALL pond
I was thinking of the rain water catchment. Building a pond wouldn't fall under that?
And that pond was in northern Vermont. And they were goldfish. (solely for mosquito control)
show more
5 years ago
fish
how to best utilize a SMALL pond
Small ponds are a little tricky for raising fish. I tried one last summer and I think it was either too hot or the temperature swings were too much for them. It was about 3 feet deep. If you went deeper the fish would have more options for which temperature range they prefer. Also having lots of trees/vegetation around it would shade it and help keep a more stable temperature I would think. And in Colorado I'm assuming you'd need to keep it pretty hidden with the crazy water laws, though I could be totally wrong on that, don't know the specifics for CO.
show more
5 years ago
fish
Identifying trees by buds, and making characters out of them to help you remember!
Maybe this belongs in the mindless drivel section, but I believe it's also very helpful, especially for folks trying to identify what's in their forest. Buds can be the easiest sure fire way to identify a species. Here's a link to some of the characters a friend and I have made out of buds and bud scars. It's surprising how much they actually look like faces!
http://wildburlington.blogspot.com/2015/03/dichotomous-key-v-bud-scars.html
Also, lots of other interesting stuff on this blog for folks interested in woody plants.
show more
5 years ago
forest garden 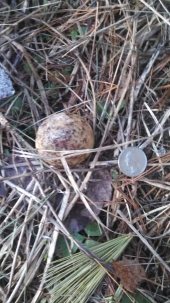 What is this? I found it in Maine
Looks like an oak gall, also called an oak apple, to me. Any red oaks nearby where you were?
Here's a quick link on it...
http://www.fcps.edu/islandcreekes/ecology/oak_apple_gall_wasp.htm
show more
5 years ago
eastern usa