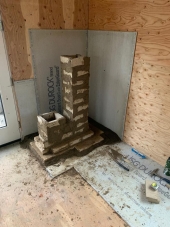 Dick Winters wrote:Unfortunately we can not find anyone who has high temp ceramic blanket that’s why we were hoping to use the clay/perlite mix around the whole combustion unit.

You're in luck, it is readily available by mail order from Thomas Rubino: https://dragontechrmh.com/morgan-superwool-plus-non-ceramic-fiber-blanket

Shouldn't require more than about $30 worth of morgan-superwool to insulate the combustion unit. While you're ordering, might get a little extra to use for insulating the "heat riser".

Dick Winters wrote:...does it make a huge difference if the dimensions are a half inch off here or there? I assume the CSA, precise dimensions, are to ensure the “thermo siphon” works and the unit drafts correctly.

Before encasing the J-tube combustion unit with Perlite/clay mix, wrap it in high-temp fiber blanket insulation, about an 1 inch thick. That will serve as both insulation and an expansion joint between the combustion core and the outer skin, which can consist of your Perlite/clay "encasement mix".  On my build, I used two inches thickness of high-temp blanket insulation to encase the core, then over the top of that went straight to a decorative brick work (also serves as thermal mass) for the outer skin over the combustion unit.

There are several ways to build these combustion units. The high-temp blanket insulation technique is the best I've personally used for preventing heat expansion cracks from forming in the combustion unit's encasement masonry.
show more
1 week ago
rocket mass heaters

Dick Winters wrote:Perlite mixed with clay would be a nice base for it correct? On top of the cement board?

Insulation does not prevent heat transfer, it only slows down the process. Best practice when building on a wood floor is to have air circulation (air gap) under the J-tube combustion unit.  I.e. lay down parallel and evenly spaced rows of common brick, the rows spaced far enough apart that they can be "bridged" with a layer of horizontally laid brick that form a platform the same square dimensions of the cement board base. No mortar is needed. Then build the combustion core on that elevated brick "bed". Have a careful look at the diagram on pages 43 and 45 of The RMH Builder's Guide by Ernie and Erica Wisner.

Notice in the diagram's insert on page 43 the exact detail, which includes a thermal reflective layer of aluminum foil on top of the elevated brick bed, then an insulating layer of Perlite/clay mix, then the combustion core brick work.

Alaska RMH!
Hi Dick, neat start on the combustion unit. I'm not sure if it's the photo angle etc. but it looks like the burn tunnel may not be tall enough inside. From the floor of the burn tunnel to its ceiling, is it the same measurement as the span / diameter of the wood feed opening?

heat and cool a dome naturally

Thanks. I live in the tropics. High humidity. Mould.

So I just have an interest in Earthships. That they are feasible and we can draw inspiration from actual practice just like that famous double roof house in the Philippines.

But what bugged me most is this: "Every building has its own renewable “power plant” with photovoltaic panels, batteries, charge controller, and inverter. The key step in making these systems affordable for residential use is to “design down” the electrical requirements of the home before the solar system is sized. Super efficient lighting, pumps, and refrigeration help lower the load, as does the lack of any need for electric heat or air conditioning."

This requires a lot of electronics most of which are not evergreen like the 741 Operational Amplifier. Don't forget the supply chain problems around the world and chip shortages. Unless you have your own silicon foundry ...........

Earthship Biotecture has an interesting Earthship design specifically for the tropics. Have you checked out their youtube channel? Especially of interest is their project in Haiti. I'll place the link here: https://www.youtube.com/c/earthship/videos

My own experience with mold, and preventing it, has to do with keeping indoor air moving, and fresh air flowing in the living space. Moisture combined with dead stagnant air, and a coarse substrate that holds moisture, dust and dirt, guarantees mold growth. The Haiti Earthships also have buried ventilation tubes, to keep the living space air refreshed etc. The DIY masonry roof design is appealing to me personally, to get away from using expensive materials like roofing "tin".

heat and cool a dome naturally
Looks like someone decided to "improve" their website w/o getting my authorization :-D Similar diagrams and info appears to have been moved here: https://www.earthshipglobal.com/design-principles

It's all gone. Not even found at the Wayback Machine. The internet is no longer immortal.

I built an 8" RMH into a typical small 900 sq. foot stick-frame (2x4, R11 exterior walls) house and have been working on shoring up the insulation, in order to extend the thermal mass heating flywheel effect. Winters are fairly mild here, and on a day where the lows hit the mid 'teens (F) and highs into the mid to upper 30s', the house will stay around 70 degrees (F) for 12 hours after the fire is out, and I usually fire the RMH for 4 to 5 hours to warm up the 40-inch wide x 10-foot long thermal mass. My RMH is patterned after Ernie and Erica's Cabin-8, modified to use a Peter van den Berg 6" batch-box combustion unit.

Best of luck with your build. Sounds fun.

Coydon Wallham wrote: Would clay mortar be like thicker clay slip or is there more to it?

Yes indeed, use a high quality mason's sand to make the fire clay mortar. A good mix to start with is one part fire-clay to about 4 parts sand.
show more
3 months ago
rocket mass heaters

Carl Nystrom wrote:
Edit: looking at the picture again, I realize that the colored wires on there just attach with spade connectors, dont they. So they could easily have been switched. Check for a resistance between the center and one of the other legs. A value in the hundreds of ohms would be your LED circuit.

Another thing to keep in mind is that LEDs' only conduct in one direction. So if the few hundred's ohms resistance is not found, reverse the ohm-meter's probes and test again. Some multi-meters have a DIODE TEST FUNCTION, and it's helpful for finding the connections to the switch's built-in LED.

Without an ohm-meter, and if the switch wiring diagram is suspected to be in error, it can be confirmed as follows. Sometimes it is faster this way too, i.e. use a small resistor, anything in the range of say a few hundred ohms to a thousand ohms, and 1/8th watt rating will suffice.

Attach the resistor in series with a test wire (or a couple of red clip-leads) and connect one end of this to the positive terminal of a battery or DC power source.  Attach a second wire (black clip-lead) to the negative of the battery or DC power source. With the switch under test set to its ON position, randomly connect the free ends of the test leads to the switch until a combination and polarity of a particular connection arrangement is found that results in the switch's LED illuminating. This will verify or indicate the common / negative connection for the switch's LED, the terminal to which the black clip-lead is attached.

EDIT: I see this issue has been sorted out, whilst I was hammering out the above:o) Yeah, the disregard by certain overseas MFGs for proper wiring color codes is 'nuff to have one engaged in hair-pulling frustration. I've run into the same thing many times. 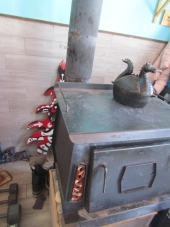 Jeff Pollari wrote:Wow!
So, my deck is only 4 feet off the ground. Stacking concrete on a slab is  not a bad idea but IDK how hard it would be to build such a slab considering I'd have to hang out under the deck to dig and pour it.

In that case, it's easier if the deck is opened up first, then you have a nice open hole in the deck in which to work standing up straight etc.


Jeff Pollari wrote: My house is already heated with a big stove which is on the other side of my coming addition. I'm wondering if I can just convert the present stove (pictured below) into a thermal mass rocket stove which connects to the addition through the wall behind it.

A doorway or two in the wall behind your present woodstove will allow the adjacent addition to be heated, assuming it's not a huge room. As far as converting a steel box-stove into an efficient, say batch-box, you basically just end up using the door off the thing, if you want to do it right. It can be done, has been done, but it takes a good deal of work to do the conversion, metal working skills, and etc. and really doesn't save (replace) much in the way of masonry materials. Easier to just build a batch-box / bell brick masonry stove. Have you seen Peter van den Berg's website ? --->
https://batchrocket.eu/en/building
show more
5 months ago
rocket mass heaters