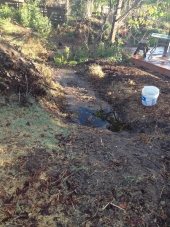 how to clean up rain water collected from street run off?
Since this area is functioning as a catch basin from the road, screening out the debris like cigarette butts is important, and I would help protect my garden from that, sand and gravel that washes in from the road by removing it. It sounds like you have set up a filter to deal with that, which I think is really good.
I can help with some basic principles. If you are having heavy flows of water followed by drought, mulching plants and building up the organic matter in your soil in that area will help. A rich, healthy layer of soil helps hold rainwater and prevent flooding and also helps plants survive drought. Now for the more difficult part-California plants that are drought tolerant but will be happy with an occasional onslaught of water, retain and filter it. These plants will also have to hold your soil to prevent erosion and help the soil thrive.
Wax Myrtle is a shrub that is pretty tolerant of varying soil types and works well in a rain garden, Pacific Ninebark is also pretty tolerant of different types of soil so it might be a good bet. It filters well, too. Birds love red currant (it prefers the shade) and it filters well. California Fan Palm likes desert oasis and works well in rain gardens to filter. It also produces an edible nut. Common Yarrow and Columbine might be good to mix in. Santa Barbara Sedge doesn’t need water, but will grow thick with water and it will filter well. California fuchsia likes water but also handles drought. California buckwheat is a drought tolerant plant that will filter water well in a rain garden, too. Butterflies love this plant. Deer Grass might work, too.
I would speak to someone with on the ground local experience, and it might still take some experimenting. Tell them whether the area is sun or shade, and what type of soil you have. I would try the California Native Plant Society or a local nursery like Las Pillitas Nursery in the San Diego area. The San Diego Botanical Garden would also be a great source of information http://www.sdbgarden.org/
show more
6 years ago
lawn

Leaf Mulch
Hi Gail,
Yes, leave some space around the base of your tree or shrub when you mulch. This prevents rot and decreases the chance of mouse damage. Also, the roots spread out from the base at least the breadth of the plant, and that is where the mulch is most effective. Use about two to four inches of leaf mulch. It not only returns nutrients, but helps the soil conserve water.

how to clean up rain water collected from street run off?
Here's a list of some drought tolerant plants for Southern Claifornia
http://www.lvmwd.com/home/showdocument?id=711
They include yarrow, showy penstemon, desert mallow, wax myrtle, and bay laurel.
But with the extreme droughts in California right now, getting any plants started may be really difficult. I really hope you get more rain in California soon!
show more
6 years ago
lawn

lawn vs. permaculture
Check out Habiturf, bred by the University of Texas http://www.wildflower.org/habiturf/Habiturf%20Brochure%202013.pdf
It might grow well for you and needs very little water once established.
show more
6 years ago
lawn 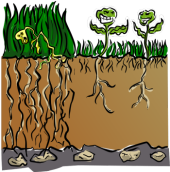 Mowing high...?
You are raising some really great points.
I think part of why we look at this differently is the difference in living in Missoula verses living in New York. I agree that if you have a good, established soil culture or if your native soil is a rich loam, you will not need to aerate regularly. On the other hand in many areas aerating can really help establish a good soil culture. I live in New York where the native soil is mostly clay-like.
Most turf grass here is a combination of Kentucky Blue grass, Rye, and Fescue-so both bunch grass and rhizomatous, all cold season and none of them native. Some people will add warm weather grasses like Bermudagrass to outcompete the weeds when the cold weather turf is dormant, but many people don’t love the way it looks and it can be aggressive.

Over a decade ago I spoke with the soil scientists at Cornell’s Soil Center in Amenia New York, and they suggested aerating and leaving the grass longer. This helped tremendously. So did adjusting the pH with lyme in some areas.

Aerating helps the roots grow because they aren’t compressed (think a seed starting mix that is loose and loamy), and supplies them with oxygen. It also lets water and nutrients get to the roots more easily. The plants nourish the soil bacteria, building up a good soil culture and a large, productive layer of topsoil. When the blades of grass are longer the roots are longer, there is more photosynthesis and the roots weep carbohydrate that feed the soil bacteria. So longer grass and aeration helps build up the soil. The cores from aeration stay on the lawn, but start adding a looser, loamier layer, especially with clippings, fine leaf mulch, and occasional compost if necessary. If you have great soil, I agree you don’t need to aerate. I also think it is easier to get good soil in a meadow with a variety of grasses and legumes that you let grow most of the season.

Overseeding is suggested by both Cornell and Rutgers organic programs to outcompete weed seeds on mowed turf. An established pasture does not need it. But here we suffer from both Japanese stilt grass and crab grass in turf. The seed is ubiquitous, and overseeding at the right time helps out-compete these weeds. They are both annuals, and mowing before they go to seed is crucial in controlling them.The alternative is just tolerating the stilt grass for a month or so in August.


Then there is the earthworm issue. I’m mentioning this only because I think you might find it interesting, not because I think it is practical, and it only pertains tot he Northeast. I just don’t worry about it, but many ecologists in the northeast consider earthworms an invasive species... Dr. Peter Groffman is a microbial biologist and researcher at the Cary Institute of Ecosystem Studies in Millbrook, New York. He says glaciers killed all of the earthworms in the north east during the ice age, and the temporal forests of the northeast developed without them. Forests south of New Jersey developed with them. Why are earthworms bad for temporal forests? He says the forest soil of a northern temporal forest is characterized by a thick forest floor, or duff layer that is 5 or 10 centimeters thick and you can pick it up like a carpet. It is consists of decomposing organic matter and leaves. This duff layer is important in carbon sequestration and water retention, two crucial functions of the forest. Once earthworms are added to the forest, in two to four years the forest floor disappears. This not only leads to diminished ability to retain carbon and buffer floods, but also facilitates the invasion of nonnative plants and invasive species. There is also a loss of spring ephemeral plants and understory growth. The trees then have an increased sensitivity to drought and climate changes with these changes in the forest floor. Soil fauna such as salamanders suffer, but white-footed mice that transmit Lyme disease flourish, leading to an increased tick population. He is studying this in Cornell’s Arnot Forest and Millbrook’s Tompkins Farm. He said that the worms that we see in rich soil don’t make the soil rich, but instead enjoy rich soil. This is different from composting where the worms are clearly wonderful! Anyway, this is just out of interest and I hope not took wonkish!
show more
6 years ago
lawn
grow neat stuff in your lawn
So many wonderful suggestions!
Here are a few more to think about.
Consider adding a small amount of alfalfa, it is a forage legume, or partridge pea. Both fix nitrogen and enrich the soil.
In low meadows butterfly weed, asters, and Canada milk vetch add diversity. Also New Jersey Tea, coreopsis and goldenrod.
Seneca Meadows is a sight that has been restored with native warm season prairie in Savannah NY. I'm on the Board of Audubon NY and was there a few weeks ago because it was designated an Important Bird Area. These are tall grasses and flowers, not mowed except once or twice a year. They used Big and Little Blue stem, goldenrod, and even had a rare but native cup flower. Switchgrass and Indiangrass. Lots of Cattails in the wetland areas. Also milkweed and butterfly weed.

I also let cilantro, mint, chamomile, and oregano escape into my lawn. They aren't invasive, but aren't prolific either. I encourage the mint near my vegetable gardens or plants that I want to protect from pests.
show more
6 years ago
lawn

Let your lawn grow to 4" and cut it back down to 3". That leaves only 1" clippings which can be left in place and return nitrogen to the lawn. They are all the fertilizer an established lawn needs. The longer blade gives the plant more room for photosynthesis, and the roots will be as long as the blade so the plant will be stronger and withstand drought better. Consider aerating and overseeding once a year in the early fall.
Duane makes a good point-maybe let some of the area grow into meadow, or plant some native plants.
Your children will love the wildlife that will be attracted. Echinaccea and Bee Balm attract lots of honey bees, butterflies, dragonflies, hummingbirds and goldfinch.
show more
6 years ago
lawn

moldy hay might be the best lawn fertilizer ever
Hi Paul,

I just learned something! It makes sense that moldy hay would be great mulched into a lawn, but I never thought to do that.
It make good compost, too.
show more
6 years ago
lawn

how to clean up rain water collected from street run off?
Hi Marianne,

Rain gardens are a wonderful natural way to help clean the runoff from roadways. Simple indentations with water loving plants that catch and filter the water.

I love the Fiskars weed remover too!
If you have lots of dandelions it is a sign that your soil is not supporting your lawn. The most common problem causing tons of dandelions is compaction. So I would aerate your lawn and overseed with a grass seed well suited to your climate. I would also have the soil tested. you may need to balance the pH with some lyme or replace missing nutrients. Soil bacteria don't just need N, P, K, so compost is a wonderful way to replace nutrients in a balanced manner.
And Miles makes a good point, part of it is a change of outlook. Healthy children playing on a lawn with a few dandelions is much better than using toxic stuff to get rid of them. I have dandelion recipes in my book by a good friend and a well known cook book author Ed Giobbi.
A lot of people are changing the way they look at dandelions. Our garden club visited Martha Stewart's farm and there were dandelions and buttercups in the fields because she thinks they are pretty.
show more
6 years ago
lawn