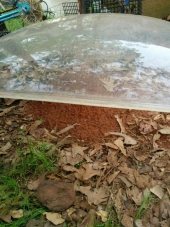 fireants in my pants
This solution is recommended for several pest and unfortunately it is probably your only recourse;
Two nuclear explosions 90-160 days apart in extreme cases a third treatment may be necessary.
show more
6 years ago
bugs
How many broken necks in 1 year?
Also been raising chickens among other things many moons, chickens breaking their own necks is very rare indeed and if and when they do rarely is it fatal, (it is somewhat of a shock to see one go walking by with its head and neck swiveling around like a broken fawcet. Keep monitoring with the cameras, the culprit will show up.
show more
6 years ago
chickens
Electric fence, risk for hens?
Put the electric hot wire outside where the predators are with the chickens inside then there is very little risk. If a chicken were to get hung in the fence while in contact with the hot wire it could be fatal, but other than that the risk is very low.
show more
6 years ago
chickens
Predator help: black bears versus boar
Can't help you with bears, never been around them, boars on the other hand I've had some dealings with. For the most part the majority of big bad oar stories are hype, you run across the occasional buster bad butt, but even the majority of them make a run at you just to get past to get away. I will throw in a caveat, that both are living thinking creatures, both are ranked high on the intelligence scale so that makes both unpredictable and that is what escalates the danger potential.
show more
6 years ago
predators

Please tell me they get mean!
Pigs make pretty darn good pets actually, had several growing up but dad and grandpa weren't in the pet pig business so when the pigs came of age they went to the sale barn, brood pen, or freezer.
show more
6 years ago
pigs
Hatching Troubles
The experience I've had with it doesn't look promising, I've rarely if ever had one to survive. The problem is generally the humidity dropping in the incubator. While it isn't feasible for most backyard growers what we've done is to dedicate an equal number of incubators to hatching brooders, 3 days before our eggs are due to hatch we transfer the eggs to the brooder freshly filled with humidifiers and the eggs sorted into excluders for each breed. The exit best thing would be to be sure your humidifier is topped off and maybe add an extra when you stop the egg turner.
show more
6 years ago
chickens
baby chicks with adult chicken
I wouldn't combine babies with any adult that's not their mother, adults are very hard on babies you'll likely lose several.
show more
6 years ago
chickens
what breed to catch rabbits
Looks like it gonna be whippets, I've never dealt with them, most dogs I've had experience with, if they have the desire and ability to chase and catch rabbits they generally are very high energy animals.
show more
6 years ago
dogs and cats
Can dogs eat poop for nutrition?
Not if they want to remain this man's best friend!
show more
6 years ago
dogs and cats
It's a bummer
My experience with dogie (hey I'm a Texan) lambs has been many moons ago so I'm sure the milk replacers are much improved, but I would still read up on the latest scour treatment. I'm guessing it's still very easy for a lamb to come down with them.
show more
6 years ago
goats and sheep