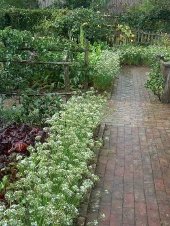 What perennial plants could you not live without?

Apart from being delicious, garlic chives are my most successful pest control plant. They draw a great myriad of wasps, in particular the blue winged wasp (Scolia dubia) which is a vigilant predator of the Japanese beetle (Popillia japonica).

It also attracts the Pennsylvania leatherwing (Chauliognathus pensylvanicus) in great adundance, which predate a number of other insects such as aphids.


Interesting, Dylan, I've also observed it being a great insect attractant along with many other Alliums! This is one of the 80 perennials featuring in my book! It is also a beautiful edimental..in the picture seen as a perennial edging of a herb garden in England. For those living in cold areas, the different varieties of Allium tuberosum vary widely in hardiness (there are many varieties developed in the Far East where it is second in importance to Allium fistulosum), some for the leaves, others for the edible flower stems.

What perennial plants could you not live without?
Yes, Nettle pakoras does sound awesome! Must try next season.....don't know why I didn't thimk of it...

What perennial plants could you not live without?
Yes, all Hostas are edible, but it's mainly the large leaved varieties / species which are used

What perennial plants could you not live without?
Pamela, you're right again, I'm sure older leaves could be used in smoothies and fermented...yes, they are coarser...I'm still learning, in fact there seems to be more to learn the more I know...

I do tend to mainly use the young leaves (sometimes through cut and come again) as I suspect they are more nutritious and to allow the plants to recover for next season.
show more
5 years ago
plants

Unusual Plants We Should All Be Eating?
Walking onions/ tree onions/ egyptian onions aren't sold that much simply because they are so easy to propagate by putting a topset on the ground....
These are mostly past on from person to person. I'm sure someone here will help you...if you haven't got an offer in one month, I will send you some...
By the way, most people in Europe don't realise that there are many varieties..

show more
5 years ago
plants
European supply, for roots and tubers please!
I have listed a number of suppliers of the new wave of permaculture / edibles nurseries on my web site...please send me suggestions of others (I will add some more in the US soon)...
http://www.edimentals.com/blog

For more unusual perennials, the RHS Plant Finder is a good start: https://www.rhs.org.uk/plants/search-form
show more
5 years ago
plants
Question for Stephen Barstow: How to introduce others, especially children, to perennial veggies?
Interesting question Pamela! Whilst modern children might be conservative when they are out of touch with nature and other children who are in touch with nature, I suspect that it is the opposite traditionally and that it is the children who keep foraging traditions alive longest as it is children who have the broadest social interactions. The same is true of local dialects - they tend to be maintained longest in the children...

Otherwise, my experience coheres with Rob's - the plant my kids remember best is undoubtedly sweet cicely (Myrrhis) which was seasonal candy to them (and dried apples in winter).

My kids also loved sour tastes - my daughter and her best friend would sit in the rhubarb patch and nibble on raw rhubarb. Practically everyone who was a kid in Norway in the 1960s and older knew that sorrel (Rumex acetosa) and wood sorrel (Oxalis acetosella, other species in North America) were tasty and would seek after it. SO, WHY ON EARTH do they not sell plants in supermarkets that kids actually LOVE. Clearly, nobody has done a market survey?

I give references in the book to various other plants that kids loved to eat traditionally. We need to start to relearning them....
show more
5 years ago
plants

Unusual Plants We Should All Be Eating?
Scorzonera (there are several species, the most common hispanica) and Tragopogon (salsifiies) are mostly used for their spring greens when wild foraged in the Mediterranean countries, very popular and the flower shoot is surprisingly sweet...
Scorzonera is one of my favourites and I've been harvesting one clump for over 30 years, long-lived plants and very hardy....and it's in the book of course

Edible Flowers
But, please don't eat a lot of daylilies raw as they can make you sick. I discovered when researching the book that the Chinese authorities even put out warnings against eating daylilies raw! I advise to keep either to species daylilies or the older fashioned simple flowered forms as we don't know the chemical composition of all the myriad of modern cultivars, although I'm sure the odd flower won't hurt.... grow different species and you can have flowering daylilies most of the summer!

show more
5 years ago
plants
The wonderful world of Edimentalliums!
Yes, I talk about this in some depth in the introduction...