I currently operate a greenhouse that employs Solexx as it's only glazing. As a point of comparison, it's roughly 1200sqft, roughly 6ft below grade, and utilizes a solid north wall with lots of thermal mass throughout.

I'm not the biggest fan of the Solexx. It has it's benefits, namely a purportedly higher R value and, especially where I'm at, the ability to withstand hail storms in better shape than hard walled polycarbonates. The thing that bothers me the most about it, however, is the rather drastic expansion and contraction of the material with fluctuations in temperature. Our structure is covered in a shingle-lap fashion, rolling out strips the entire length of the structure and starting from the bottom up. As a result, the overlapping portions that span the gaps between the rafters expand and contract considerably. The manufacturer suggests installing it when it's 60 or so degrees F to mitigate this expansion but we still see gaps up to around 4 inches where it laps. With added work and some creativity, it can be mitigated, but bear in mind that it has to flex some so attaching it too well can lead to it ripping out from whatever you use to fasten it (we used metal roofing screws).

Here's an photo of some of the gaps that form. These were on a 70-80degree day. They get worse when it's even hotter and sunnier. 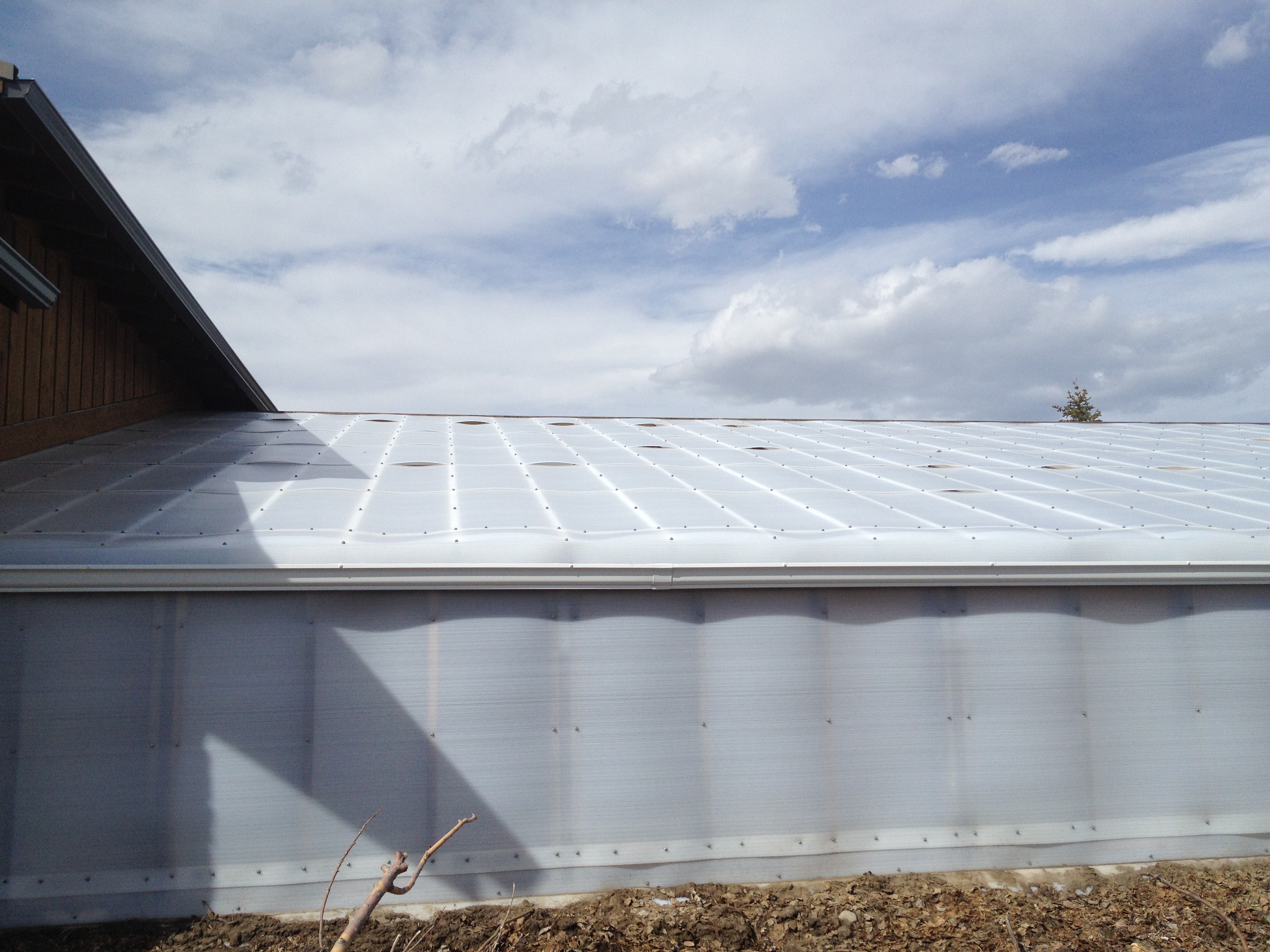 A friend with an even larger in-ground structure attempted to run his parallel with the rafters so that the overlap landed on the rafters. They also tried to screw more frequently (4" as opposed to our 6-8"). The result is an extremely leaky greenhouse that rains almost as hard inside as it does outside.

A potential solution that we're investigating, though not my favorite, is applying gutter sealant at the lap joints before screwing it down. The stuff is extremely tenacious but still stretches enough to allow the solexx to flex and yet prevent large gaps in the structure. We haven't employed it at any real scale yet but our tests of gluing w/out screwing then leaving the pieces on the sunny dash of a truck on a 95 degree day were promising.

To directly address some of your questions:

-Solexx doesn't really mitigate heat gain in our structure. Granted, we have tons of thermal mass to exacerbate the situation, but we were achieving temps of upwards of 120 degrees in early spring (zone 4) when the outside temps were between 40-60. We still use a 30% shade cloth during peak heat. The claims that I'm seeing on their website don't so much say that it reduces the heating of the greenhouse directly but that it's "superior" insulative properties reduce the amount of additional heat needed to maintain temps during colder seasons. That much I've observed. On day's when it's 10-20 below 0, the temps in our structure tend to be 18-25 degrees above 0 with no additional heating.

-Plants that like indirect light may benefit. It does, to some extent, diffuse useable amounts of light but I don't think that it's much of a factor. We grow plenty of sun loving plants that get plenty of light, even with the additional 30% shade cloth. At the same time, plants in shadier areas of the greenhouse don't seem to benefit much from the supposedly even diffusion of light offered by solexx. They still appear leggy and stunted compared to those in more direct light environments. Still, it's workable, just gotta plan accordingly based on your site and your needs.

My apologies for the wall of text. This is one of the first times I've had something meaningful to contribute whilst the discussion was still active!