SEPPers Program: Seriously Excited About Permaculture Pampering!
My wife and I are taking a road trip, and are interested in the SEPPers program.  September 2,3 and 4 2017.  We are interested to stay in the Teepee.  I work as a plumber and am reasonably handy.  What do I need to do to reserve those dates?
show more
3 years ago
wheaton laboratories 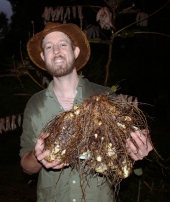 Welcome David Goodman (aka David The Good) author of Grow or die
What is your solution to being displaced? If we have to leave our home and don't have access to major infrastructure. I.e.  Water, storage equipment like refrigeration, and fertility.
Looking forward to your thoughts.
Thanks!
show more
4 years ago
gardening for beginners

Paul and Jocelyn,
I think what you are trying to do at Wheaton labs is really awesome!
I was reading this post, and a few things come to mind.
First is the concept of ownership. I believe it is human nature for someone to take better care of something that they own. They are more responsible, they maintain things on their own, and they just care more. Kitchen towel example: As a kid I would use kitchen knives outside. Mother always got mad. I didn't know what investment those knives embodied. To me they were just one of several knives. Now that I have a family of my own I understand that those knives represented a portion of the small amount of disposable income my mom had. They could be replaced for 20-30 bucks, but when you have 200-300 dollars a month to pay for things other than fixed your regular fixed expenses, 20-30 bucks is basically 10% of all that you worked for that month. Until you are in the position where you are dishing out your money for something: the somethings appear to be cheap, and easy to replace.

I started to read a book: the 5000 year leap. The author talks about Jamestown when it was first being settled. They failed miserably. They were "sharing" labor and resources in a pool under the premise that you put stuff in, and can take stuff out when you needed to. It wasn't working. People were getting sick, starving and dying from exposure. I believe it was the third year that a gentleman came to Jamestown (cant remember his name right now) and did something he wasn't actually authorized to do. He gave people land. Something like 5 acres on the condition that they pay a tax of corn to the community. At this point things turned around. They finally had something of their own. They stopped having as much sickness. People stopped starving, and everyone built the shelter they needed.

I am renting a house right now. There are tons of things that I would like to do to improve the property. Build a fence, Improve the irrigation infrastructure, Lay tile inside, Pour a cement pad to do auto-repair work on, Build a garage, Add insulation (100 year old house with none in the walls), Plant fruit trees, Build wicking garden beds, and all sorts of things to make the place more visually appealing as well as make to make my wife happy. We plan to sick around for the next 4-5 years, and then we will be moving on. I can't afford to make most of these investments in the home, as much as I would like to. But if this was my own place, I wouldn't think twice about making these investments. While I am renting I will do some things like put in a fence, that make life easier while we are here, but my soul isn't in it the same. I am going to do good work, but Im not pouring my life into it.

Secondly I would like to comment on Policing people. I am currently in the Marine Corps Reserve. Marne Corps boot camp is an interesting place. People from all walks of life come together and have to coexist in an extremely stressful environment. The recruits generally behave exactly how they are expected to behave; the reason for this is fear. They are terrified of being the one that gets noticed by the drill instructors. One way to get people to behave is to make them afraid. That unfortunately works only as long as they are afraid. Once you get out of boot camp, you go on to other training. It is incredible how one person can be spotlessly clean one week, and two weeks later they are a complete slob. They lost the fear. I guess my point is, fear doesn't work.

Something that I have seen work is a desire to please someone. I know a guy named Kyle. He is the kind of guy that you just want to be around. He makes you feel good. He builds you up. makes you believe that you can do anything you set your mind to. He was running a summer camp that I participated in. All the people that were there did what Kyle asked them to do. They did it unquestioningly, because they wanted to please Kyle. But even this wont work if you have the wrong people. All the staff there were extensively interviewed and screened, as well as all the participants. You have to have good people to make good things happen.

Sorry for rambling, but I just had to get this out.
show more
5 years ago
wheaton laboratories