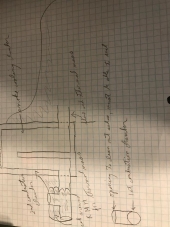 Starting a Suburban Project
I have been taking a bit of a break outside, but learning how to ferment pickles, my first time ever making soap from scratch.  And making cookies in stages for the family Christmas Eve Party so I don't get overwhelmed.  Which can be difficult between ADHD still impacting my executive functioning and the anxiety disorder making it worse.  So fun for me, and pickles, soap and a plethora of party cookies.
show more
4 weeks ago
oklahoma and texas

Does This Look Right?

Kate Downham wrote:Most people use glass jars or ceramic crocks for fermenting. As the acidity grows in the ferments, chemicals from the plastic might leach into the food, so most would avoid plastic for this reason.

It was more a case that they were on hand and cheap than because they were optimal in either material or quality.  I plan to get glass as funds permit, I even invested in glass “stones” and airlock lids for later when I am more confident.

Thank you for the reassurance.  I was expecting gases to be released, but not bubbles, not idea why, just didn’t expect to see bubbles.
show more
4 weeks ago
fermentation

Does This Look Right?
Fermented pickle attempt 2.  Tiny batches for now to learn the technique and find a good flavor profile before trying to make a pint or quart batch.

I started a small batch yesterday, baby carrots, minced ginger and a few dried whole spices in 5% brine to cover.

I burped it, but I am seeing tiny bubbles, does it look right, or did I do something wrong?
show more
4 weeks ago
fermentation

Starting a Suburban Project
It took some careful wrestling, but I got my ridge pole cut, trimmed and out of the tree.

Mike Haasl wrote:Do you have a vehicle?  I'm thinking with some creativity you could get a few buckets of gravel from a gravel quarry or landscape place for free or a buck a bucket.  Or if they grade gravel roads in your area they sometimes leave a ridge of excess gravel.  Carefully removing it could be a community service...

Due to a series of red tape, I don't have a driver's licence.  We are working on getting it back, but not sure how long it will take.  Once I do, it would be worth asking.
show more
1 month ago
oklahoma and texas

Starting a Suburban Project
A few progress pics.
show more
1 month ago
oklahoma and texas
Pole Donations, Please?
I need poles about 35-40 poles that are 2.5+ inches in diameter and at least 6 feet long for rafters.  I want extras just in case.  I know I can get 5-6 of those from our yard, as well as anestimated 10-12 or more from my in-laws property.

Any that can be delivered would help tremendously.  I am working on asking about a pickup to transport poles from my in-laws property.  Please send me a purple moosage if you can help out with any spares lying around.

Any advice on air drying time for small diameter wood for construction?  It will be at least March to May before I start build.  If I don't have enough rafters, or if the wood isn't ready yet, I plan to put up a temporary tarp roof until I am ready to build the roof.

Also, any suggestions on how or where to obtain low cost sand and small gravel?  Right now, I have $16 and change.  I can get 50lb bags at Lowe's for $5, but I am trying to minimize costs where I can.

show more
1 month ago
oklahoma and texas
Earthen Floor Materials
The idea behind psyllium husks in Earthen floors is that it supposedly makes a softer surface to walk on than clay/aggregate/straw, at least according to one of my cob handbooks.  Unfortunately, I don't remember which one and even if I did, it is packed away due to limited storage.  Yes, we have way more books on a variety of subjects than bookshelf space.
show more
1 month ago
cob

Starting a Suburban Project
I have wanted a living roof for my studio since I started.  Preferably a butterfly garden.

A living roof is obviously heavier than a normal roof.  That means over engineering for safety.  The log beam site I posted above takes roofing variables such as span, spacing, combined dead and live loads and commonly used species of tree.  At 50 psf for a shallow soil roof, I am getting a minimum that ranges from just over 2 inches to just under 2.25 inches.  So, I plan to go with a minimum diameter of 2.5 inches for the rafters and a minimum of 3 inches for the ridgepole and headers.

The end two rafters on the top of the short walls will be triangular trusses.


I can harvest five or six from our yard, and some from my in-laws.  I will need to figure out how to scrounge the rest.  I want to season the wood before I build.  I still need to plan how to deck it.  I will probably end up using a tarp for a couple seasons to a year.  I will need galvanized lag bolts and nuts to connect assemble the two trusses and to attach rafters or trusses to ridgepole and to headers.  Scraps can be used inside the wall to create anchor points for the headers.

I will likely make a ferrocement shell out of chicken wire and bags of Portland cement, but wonder how living roofs were created before cement and concrete.  Does the soil layer need to be a couple feet thick for that to work, such as the Scandinavian long houses I have seen and built strong enough to support trees growing on them?  Clay can seal ponds with a bit of help, but usually needs to be kept under water.  Would lime plaster work for the roof deck instead of cement?  Would lime plaster erode?  It would be a risk, unless I could watch for problems for a season or several before adding the rest of the living roof, or having to remove sections of plants, soil and drainage to repair.

The end result would be an organic organic roof.  Organic architecture and chemical free growing plants.  Sand and gravel to have a drainage layer to drain water away from the roof.  Plant material to create an organic sponge to hold water up and away from the roof.  Soil and plants to use the water.  Mulch to keep the soil from blowing away in Oklahoma winds before the seeds can take root.  So, using water, trapping water and allowing excess water to drain before the roof decking needs to prevent water from seeping through.  I would want to assemble the roof in spring so that I would have minimal erosion as plants are getting established.  Or have to water.  Frequently.

So, tarp roof or roof deck from wall completion until the next spring comes around.  It might take a while to get and season all the rafters I will need, even though I don't plan to start cobbing the walls until late spring when it starts warming and drying up.  Or until I can get good rain gear to work in, cold and wet is miserable, while cold, wet and windy is a dangerous health risk without the right clothing.

So much to think about.  Slow and steady, plan, plan, plan.  It WILL happen.
show more
1 month ago
oklahoma and texas

I know right where there is a mulberry tree and it definitely drops fruit outside the fence line.  I think the squirrels and birds have gotten most of the acorns this season, but I know of a variety of oaks nearby as well as maples that drop bunches of seeds along the curb.

There is at least one pocket of woods within walking distance.  I would not want to gather water plants there, but it is very close to a stream.  I might go walking and explore along it.  Why do some people throw junk anywhere?  I have been stuffing wrappers in pockets when I walk since junior high.

I am very new to attempting to propagate trees from cuttings.  I figure either I will get small trees or dead sticks.  But dead sticks can be firewood or composted, so not too bad.  So far I’ve been getting a few cuttings at a time when we are at my in-laws to pick up our little one.

I am finding tiny volunteer oaks along my fence line, at least one that I transplanted and another that is probably a sibling.

I would love to get some rose hips.
show more
1 month ago
oklahoma and texas