Help!! New Build - Rocket Mass Heater not Rocketing!
Hi Mark, Gerry Parent sent me over to your thread and I see that you and I are in the same boat, trying to get our rockets working before winter. I can give you some good news- despite causing major headaches and lost sleep, my build has burned perfectly sometimes, when the outdoor temps and wind conditions are working with me. I think my build and yours will work as intended when they are actually needed, when it's cold outside, and warmer air is naturally rising out of our vertical stacks.

It's a colossal leap of faith to build a huge, heavy thing and only find out at the end whether it works or not. It seems like that's the only way to do it with an RMH, though. My attempts to run tests at every stage of construction have caused more harm than good, so I backed off for a couple days to relax myself and think about it. I'm confident that once it's cold enough outside (and maybe with some priming of the vertical stack using a candle or electric heater), my rocket will take off for good, and I bet yours will too. Of course we're in different houses and different climates, but I hope these words can help your sanity in some small way. You're not alone, and you will survive this :)

5 ton RMH on basement floor
Now that I've hooked up the complete length of pipe, I've had one good test burn, and then run into problems with other tests:

1. Normal trouble trying to make a cold start with a new RMH (it had no mass attached to the pipes, so it was cold even after my test firings). Bleh, lots of smoke! I've had success on some days, failure on others, so the weather and temperature differential from house to environment is the first obvious culprit. But also...

2. Leaks developed around most seams (barrel, pipes, etc.). When the fire fails at its worst, then smoke backs up through every gap it can find. I probably used a cob mortar mix that had too much silty soil, too much clay, or both. Once I cover everything with extra inches of cob, I hope the system tightens up permanently.

3. My barrel lid with fiberglass gasket and ring clamp also leaked smoke! The first gasket I tried came loose after a few firings, so I probably didn't cement and cure it properly. The second gasket with better cement did not help at all though, so perhaps one problem is that I was only hand tightening the clamp around the lid. Maybe it will be truly airtight now that I've used a wrench to tighten it.

I'd love to hear other people's experiences or advice if you've run into these same problems! I've lost plenty of sleep trying to problem-solve, stressing about the coming winter and wondering if the effort is worth it, wondering how safe I can keep my family with this smoking contraption!

Trying to remain optimistic that all will be well when the outside temps fall- then I'll pre-heat the chimney to start a good draft, and try again (with some mass in place to hopefully catch the heat and keep things warm for future firings).
show more
19 hours ago
rocket mass heaters 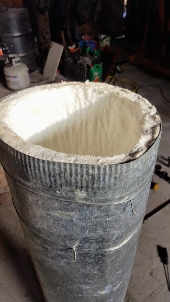 Working with Morgan Superwool Plus ceramic blanket
Here's a spot in my combustion unit where I used superwool... it has burned successfully under good conditions and so far I can recommend this method to others. However, if I did it over again I'd probably just use more clay slip between each brick and make the riser opening a little bigger for simplicity.

To get the superwool down into that small space, I sandwiched it between two sheets of paper, slid the whole package down, then slid the paper back up. Otherwise the superwool gets stuck, torn, and shredded as you try to pack it down. (I know this from experience!)
show more
19 hours ago
rocket mass heaters

5 ton RMH on basement floor
Thanks everyone for the ideas, and thanks Annie for the encouragement :) Here are some pictures of different aspects of the project so far. I've burned the unit 3 times- 1st time it worked like a charm, 2nd time it got much hotter and burned off lots of coconut oil from the barrel! 3rd time it took awhile to start, but ran smoothly and didn't put out any more coconut oil. Next time I fire it, I'll have the horizontal piping all hooked up.
show more
1 week ago
rocket mass heaters

5 ton RMH on basement floor
I'm about to build my cleanout areas, using 8 inch cast iron doors. How do you folks attach metal to brick? Does the same old recipe of clay-sand work?

I know that expansions joints can be helpful, but I haven't seen clear instructions about the basics of sticking a metal door to brick securely without typical mortar.

Thanks for your time!
show more
2 weeks ago
rocket mass heaters

5 ton RMH on basement floor
Certainly, building strong from the beginning is the best option. As I said, not every decision was up to me. You'll be pleased to hear, Satamax, that I reinforced the flooring with an extra layer of plywood and 2 (sometimes 3) layers of cement board. When I'm running the heater consistently, I'll update this thread with safety data on heat reaching toward the floor.
show more
2 weeks ago
rocket mass heaters

5 ton RMH on basement floor
Yes, I agree that removing the wood and starting from a solid fireproof base is the most foolproof, intelligent thing to do. However, I'm building on top of the wood because my father owns the house and doesn't want me cutting holes in it just yet! With this minimal-impact method, the construction is reversible, if the RMH is not satisfactory.

Satamax, I'll definitely monitor the temperatures near the wood. Either way, it could turn into a good experiment to provide safety info for others.
show more
1 month ago
rocket mass heaters

5 ton RMH on basement floor
I've laid out the footprint of my build and started on the combustion unit, but realized I should double-check with some experienced people about the air channels underneath...

I read today in Ianto Evans' book that air channels over a wood floor should be 4" high, meaning a regular brick on edge. I already laid my bricks on the flat for greater stability, so the air channels are only 2.25" high. Have I made a big mistake? Does everyone use 4" as the standard for air channels?

One option is that I can finish the combustion chamber and burn it carefully, checking how hot it gets underneath and seeing if it's an issue.
Another option is jacking up the whole thing above my air channels and making them taller.

Here's a full description of my insulation and protection under the combustion unit so far, working from floor level upwards-

.5 inch durock to distribute weight onto the plywood
2.25 inch high brick air channels exiting front and back, as well as side to side. Channels are all 4" wide.
.5 inch durock
2.75 inch clay perlite. I was aiming for 3 inches but after leveling the firebrick on top, it was lower. Ianto recommends 4", other people recommend 3"
2.25 inches of firebrick for the floor of the burn tunnel

I omitted the aluminum foil that some people recommend, because I think it will end up getting nicked, broken, and shredded when I vacuum the air channels, not providing any protection years own the road.

As I type this all out, it feels like I should lift the unit up enough to create taller air channels... before it gets heavier. Please weigh in if you have experience or opinions!
show more
1 month ago
rocket mass heaters

Working with Morgan Superwool Plus ceramic blanket
Interesting, thanks for the info. I found more 26 gauge stuff as well, much more expensive and I don't understand why!

My barrel does have a removable lid, so I can look inside easily. I want to be cautious since I'm new to just about ALL of this, but maybe I'll go with 26 ga and check it frequently. And perhaps burn off the galvanization ahead of time, outside.
show more
1 month ago
rocket mass heaters

Working with Morgan Superwool Plus ceramic blanket
I don't have any experience with sheet metal... what gauge would I need, what kind of store can I buy it at? Price estimate?

I'm guessing this 26 gauge stuff is too flimsy?- https://www.truevalue.com/shop/heating-cooling/fireplaces-wood-stoves/hvac-duct-furnace-pipe-fittings/furnace-pipe-26-ga-galvanized-10-x-24-in

Thanks for your time!
show more
1 month ago
rocket mass heaters