Working as an independent electrician (for the past 11 years). I'm a qualified mathematics teacher, worked sporadically as a reflexologist for 7yrs. Most of my adult life has been spent in London.
I plan / hope to save enough money over the next few years to move out of the city and live as self-sufficiently as possible ...
For More
London, England
Apples and Likes
Apples
Total received
4
In last 30 days
1
Total given
0
Likes
Total received
32
Received in last 30 days
1
Total given
6
Given in last 30 days
0
Forums and Threads
Scavenger Hunt

Free Heat movie
Have you logged in, gone to your main menu with your name next to it and clicked 'My Stuff'?
show more
2 months ago
videos

100% natural toothbrush
I've had some ongoing teeth and gum / jaw issues for a few years and have tried various ways of tooth cleaning and miswak sticks (actually a root) is the best for me. My gums were receeding fast when I used a plastic brush, but now barely at all. Using a badger bristle brush was definitely better, and Neem sticks were a great improvement. I tried apple sticks but miswak is my favourite and the thicker ones last longer and make "brushing" quicker. I've been using them for a couple of years.

I keep the stick in a glass of water which keeps it soft, so less need for chewing (though chewing is, no doubt, a good thing) which makes the process quicker and gentler, and I use the soak water as a mouthwash. You get lots of bits of bark and fibre in you mouth. I spit it out in the loo; outside would be fine, of course. When the de-barked part becomes long I cut it back with scissors. Scratchy plastic bristles are dreadful, IMO. And where does that plastic go when they wear down?

I was talking with a lady in her 60s from west Africa (Gambia, IIRC) who had perfect white teeth. They use sticks there, and also mix charcoal with the juice / sap from plantain stalks (plantain like a banana, not the little plant called plantain) and apply that to the teeth which makes them clean, healthy and white. She told me that when she moved to the UK she was baffled by the idea of dentists.

"What is 'dentist'? I've never heard of this. We don't have this at home."

I asked, "So what do people do there when they have a problem with their teeth?"

"We don't have problems with teeth." So it seems that the whole dentistry industry is one dependent on crappy lifestyles.

The last dentist I saw (and I sincerely hope and intend that she was the last dentist I will see) had never heard of using a stick for cleaning teeth. I explained that it was very common around the world and had helped me greatly in managing my dental health. She ignored what I was telling her, was condescending, and told me to use a proper bush, talking to me like I was a child despite being over twice her age.

I could go on.
show more
4 months ago
personal care 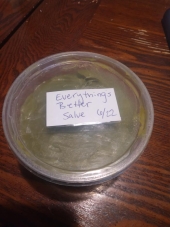 Helen Siddall-Butchers wrote:Hi!  This is a really interesting post, and I'd love to have a go, but I don't use beeswax.  Is there an alternative that would work please? 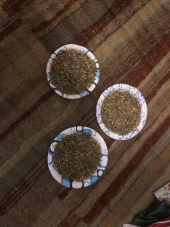 Saving radish seeds - do I need to separate them from the pods?
Thanks everyone, great info. I'll try winnowing and maybe try some crushed pods+seeds and compare results. I don't have a whole lot of experience so for me it's all about learning and finding out what works in different situations.

On reflection, it's very possible that they are not hybridised as the other allotmenteers probably picked all theirs before flowering.
show more
4 years ago
seeds and breeding

Saving radish seeds - do I need to separate them from the pods?
... or see see how easy it is to winnow them
show more
4 years ago
seeds and breeding

Saving radish seeds - do I need to separate them from the pods?
Thanks James, that's great info. They're from an allotment, so very possibly randomly crossed, so I guess it's not worth going to too much trouble with them.

Having said that, if I have a space somewhere I may try planting the whole crushed pod / seed mixture as an experiment (and if it works harvest the resulting fresh pods as food - apparently any variety taste OK cooked or pickled).
show more
4 years ago
seeds and breeding

Saving radish seeds - do I need to separate them from the pods?
I have dried radish pods from last year and wish to save the seeds. They are fiddly to remove from the pods.

Aiming at maximum laziness, can I simply crush the dried pods and plant the whole crushed-pod-plus-seed mixture instead of painstakingly separating the seed from the pods?

Hey, maybe the crushed pods will hold moisture or something, actually benefiting the germination ... maybe I'm not just being lazy

Thanks!
show more
4 years ago
seeds and breeding