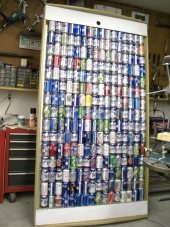 j_cornelissen wrote:
taking the fan out of the equation means you don't hve to worry about cold air being pumped in on a cloudless day!


the convection loop can and will reverse itself if the cans are colder than your inside air like say at night, so you either need to be mindfull of the system or install some type of automation to shut off the airflow


Would it make sense to power a 12v fan with a small solar panel? Then the fan would only run when sun is working and no power would be needed.
show more
4 years ago
solar