Using Dowels instead of Mortises and Tenons in Timber Frame Construction
First of all I don't know anything so don't ask me any questions. However I do read a lot. I recall seeing the peg technique and one aspect that was stressed was that it's important which way the wood shrinks as it dries. Different types of wood shrink differently.
So the type of wood of each makes a difference.
I'm pretty sure they used a different type of wood for the peg. And couldn't pegs being small be pre-shrunk ie dried.
If you do it right the peg won't shrink as much as the piece with the hole or at least not in the same direction. Also I think I've seen in books a dowel holding two pieces together and then another peg through the dowel itself. Surely this is described fully in an old book somewhere, probably in the uk. Maybe amazon.uk has a book on it.
Apologies for my non-technical language and also that I can't refer you to a source. 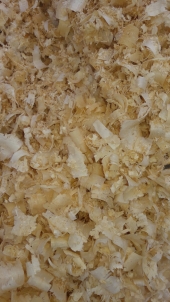 chipslip - sawdust vs hemp hurds
For walls on a small building I had originally thought to use hempcrete, but having a lumberyard nearby, sawdust and wood shavings would be easy to obtain, so I'm wondering whether to put the effort into finding a hurd supplier.

Does anyone have opinion or experience or advice re  wood vs hemp?

I've got books on hempcrete but haven't found as much on wood slip, so pointers to web or print resources would also be most welcome.

As long as the load calculations for the blocks and for the ground are favorable, wouldn't cseb be somewhat comparable?

Straw-clay attic insulation -- is it possible?
Thanks for the clarifications Glen.

To clarify one clarification, I think that the number of ~250 lbs was referring to a hypothetical box of household goods. Looking at it now it seems that the point was to pay attention to *where* the weight is, ie "distribution of weight or where it is located and how effectively it is transferred to load bearing walls/foundations."

Seems like that could still use a bit of clarification. Does 20 lbs / sq ft not mean that you could put 20 lbs on every sq ft? Ah, that clarifies it for me. It was probably an awkward unclear attempt to explain the simple and obvious principle that you shouldn't think that 20 lbs / sq ft in a 100 sq ft space would allow you to put a single small-but-heavy 2000 lb weight at the point of weakest support.

Actually it was difficult for me at the time to focus on the technical info that particular poster was asserting because it took so much effort just to imagine a positive intention on his part, given the intense sneering tone his posts originally had, before the numerous edits he subsequently made (8 - 25 edits per post) that have resulted in the exchange now sounding fact-based, and even useful.

After calling me stupid clueless numerous times, stating confidently that my house was definitely going to fall down crushing small children *and* it was going to burn down while the firefighters stood aside and laughed, he went, I found out later, to a thread of which I was unaware, to complain that I hadn't thanked him enough!
https://permies.com/t/160/54594#455443
(also intensively edited to sound less hostile)

I'm glad that at the time I made the effort to not respond in kind, because I think people since then may have benefited from this thread. It's had over 20,000 views!

By the way, it's not unusual for hempcrete builders to embed a timber frame in the walls, ie the hempcrete completely surrounds the posts. I haven't heard of anyone doing this with slipclay, and wouldn't plan on it without further research, since lime and clay are very different, but if it can be done then it has a big advantage in eliminating thermal bridging thus raising the effective insulative value of the wall as a whole. Probably only for those without code or mortgage, and/or outside the US.

To return to the topic of the thread, apparently yes it is possible to insulate roofs/attics with light clay straw, IF the frame is strong enough for the weight, which probably rules it out as a retrofit on most existing homes. To use it on a building strong enough for it, one strategy might be to start with the advice in hempcrete books (there are only a few at this time) for hempcrete rafter insulation, then get advice from a *friendly* expert to adapt those methods to account for the differences between hempcrete and lechtleim.
Best of luck to all owner-builders.
show more
2 years ago
natural building

Straw-clay attic insulation -- is it possible?
Later readers of this thread may be interested to know that some hempcrete builders use hempcrete for roof insulation.

show more
2 years ago
natural building
info on rmh and breathing problems
I've been talking with a relative who has a family member who was advised by her dr to not install a woodstove.  They have a big drafty house and are cold!

I thought that an rmh being cleaner-burning might be acceptable.

Can anyone point me to info that they could bring to the dr to ask if this would be okay.

Thanks for any help!
show more
4 years ago
rocket mass heaters
How magnetism can improve plant growth: some links
In response to Eric's request for more print sources, I would suggest this book:

which explores the possibility that megalithic sites, of which there are hundreds in the northeastern US (at one time incorrectly identified as "colonial root cellars"), and thousands in the British isles and France, may have been constructed to enhance seed fertility, specifically increasing percentage of germination even of older seed, speeding growth, increasing size at maturity and disease resistance compared to untreated seed. The ancient technology, they contend, utilized natural magnetic properties of certain types of stone, and water, combined with discontinuities in the earth's electromagnetic field at ground level, enhanced by the sun at certain astronomical alignments.  They discuss their own research putting these principles into practice.

As I lent out the book I can't look at it now but I believe it has a bibliography.

The person to whom I lent it has a megalithic structure on his property in western Mass and he says that he finds the book's arguments persuasive and they seem to fit the facts on his ground. It's a subject relevant to ordinary permaculturists as most of us have rocks, water, varied terrain and a not-unlimited budget for seeds.
show more
4 years ago
science and research
rmh heat channels - 26 gauge vs 30 gauge
Thank you both!  That's exactly the information I need.
show more
4 years ago
rocket mass heaters
rmh heat channels - 26 gauge vs 30 gauge
I've gotten some salvaged stove pipe to use in an rmh.  The instructions I'm following specify 26 gauge and I'd like to follow a proven design as closely as possible.

What would be the ramifications if those 2 pieces are actually 30 gauge?
Can I afford to take a chance on it? I haven't seen a discussion of this anywhere but if there is one, a pointer to it would be appreciated.

And thanks again for coordinating that purchase, Brian.
show more
4 years ago
rocket mass heaters