Wow this looks fun!
I have an LGD. No deer would dare come in the yard even if they found out there was yummy stuff here to eat.
show more
4 years ago
predators

Chicken photos needed - Show off your chooks
I had a good collection of photos taken today. I was quite happy with lots of them! To the point I wasn't sure I would share them all as it would be photo overload.

Then the power went out when I was uploading them... The computer has no recollection of them and photo bucket got a grand total of 3 of the chicken ones done. So I guess those will have to do!

Now I'm off to remember all the fabulous ones lost in 0111000101 land. Some were much better angles to show their bodies better. Especially the Roo as I was told he was show quality when I got him. Guess I'll have to take more pics (Like I ever need an excuse to!)
show more
4 years ago
chickens
one cow milk system?
You can definitely milk a beef cow. In many ways I would recommend it more than a dairy cow for a first time milker. Much less metabolic issues, generally less milk, easier keepers and all around hardier animals and you can make a better profit off calves if you sell, or get good beef if you butcher them. And while many beef girls can be a bit more standoffish than dairy, that doesn't mean they're mean. Usually it's just a result of less handling than dairy girls and they will quickly quiet down and get in the routine. BUT beef girls are not known for prolonged lactations like dairy cows. While dairy cattle can easily go 10 months in a lactation, and some go years, most beef girls will start dropping production at 7 - 8 months and are masters at drying themselves up, especially after you wean their calf. It would be doubtful you'd get an extended lactation from even a dual purpose breed so you'd be required to breed every year. With a dairy you could push off breeding to every year and a half - two years and probably still have decent milk production.

All of this would depend upon how much milk you do need as well, and your planned management for the cow. Separating cow and calf at night, for instance, should still gain you a gallon or two from a good producing beef lady in the morning.
show more
4 years ago
cattle

Chicken photos needed - Show off your chooks
Oh boy! I have some lovely older Cochin ladies and a handsome Cochin Roo. Although I'm not sure he'll be a good breed standards example as he's lost his comb to frost bite....

I also have an Ameraucana hen and some EE chicks. But I can't post photos until I'm on a day off so Sunday at the earliest! I just love showing my chickens off!
show more
4 years ago
chickens
cats for rodent control
Another thing to consider, more so with cats than dogs, is that their presence will deter rodents. Sure mice will still show up, but less than if there were no cats around at all. I will usually catch one or two mice in my house per year, the cats don't seem to ever find a house mouse (besides one awful year), but if there's ever an extended period of no cats in the house, the mice will start to leave calling cards.

All my cats are mousers in varying forms. Just some go farther afield to hunt and some lazier ones stay in/around the barn. One is a capable bird hunter that's on to how to capture Starlings and will take out a Magpie but none of them bother chickens. I've even had them kill a weasel but I'm still hesitant to believe it was a healthy weasel!

No comments about rats as there aren't any here.

As a side note, my LGD is a fabulous hunter. He can get a mouse within 5 minutes of going for a walk and regularly has gophers, muskrats or weasels. Of course, his skills involve open area hunting, not ambushing scurrying rodents in a building like a barn. That's the cats department. He also needed lessons that chickens weren't toys.
show more
4 years ago
dogs and cats 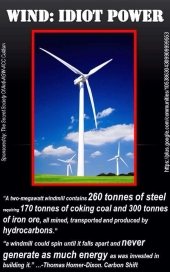 Original turbines had higher bird fatality because A) They were new and birds didn't know diddly about them. B - and even more importantly) They were trestle framed. Many, many, many birds, especially predatory birds, built their nests in the trestles. This left them more open to injury and death.

Current windmills are constantly being improved for efficiency, profit and environmental impact. Now no turbines are made with trestles and fatalities of predatory birds cratered. There's also a LOT more research put into locations of wind farms. Bird migration routes are taken into account as well as species, as different species travel at different altitudes.

There is a theory that turbulence caused by the turbines are what effect the birds and cause them to crash. If you're around windfarms now a days though, you may notice a marked difference in their formation. Older farms tend to be row after row after row of turbines. Newer set ups tend to be clusters spread around a larger area, not in rows. This helps diffuse air disruption which doesn't just help birds, but also makes the turbines more effective. Also, the height of many turbine models are higher than most predatory birds fly when hunting. Therefore they're not going to be above a turbine and accidentally glide into an air pocket causing them to crash. Not to mention, many birds of prey generally rely heavily on their ability to glide and hover. Any bit of air disturbance will make this harder and thus, they aren't going to prefer to hunt in such an area. So a wind farm with no trestles to perch on to nest or scan for prey and bad air to glide in to hunt make them less than ideal areas for raptors to hang out. I live on the edge of a wind farm and there are plenty of birds of prey around. But to be fair, I don't walk into the fields and pastures with the turbines to see if there are large amounts of dead hawks and eagles there. I highly doubt it though.

There is concern regarding bats being unable to predict the rotation of the blades leaving them at a severe disadvantage. However, again, sites are researched and most try hard not to build in locations putting large bat populations at risk. But there are other management techniques as well. Some areas that have shown serious fatalities may shut the turbines off at night so they aren't a risk to bats. This method is also used in other areas with other birds.

Turbines are constantly works in progress, as with all things. They've come leaps and bounds in the last few decades. Any concerns with them are generally fairly miniscule, as I think this thread has highlighted out. It's usually more a case of rumour and insinuation vs actual problems.
show more
4 years ago
wind

A link to my "The Ultimate Guide To Broody Hens" article

Miranda Converse wrote:Not sure if this is just coincidence or not, but mine seem to go broody on the days when I forget to collect eggs and there are a bunch in the nesting box. Maybe worth a try to put 7 or 8 eggs in a favorite nesting spot for a couple days. If it weirds you out to leave eggs outside for a couple days, you could probably try wooden eggs.

There's usually eggs and golf balls in the nests. I think it's more the light and warmth. While the days are longer now, it's still not always warm.

If I was more organized Id have an insulated coop with supplemental light where they could be cozy and safely raise their chicks. One day!
show more
4 years ago
chickens

Right now is the time of year I want them broody and hatching. But they never seem to want to commit until May or June and then I'm having later chicks then I like. Earlier and I could butcher Roos instead of carrying them through winter.
show more
4 years ago
chickens
Sharing Milk with Calves
Another option that works for some people, more dependant on your set up I think, is having the calf nearby while milking the cow. Either beside her or in front. Many will let down everything with the calf so close, although there are Wily Old Girls who won't fall for this!
show more
4 years ago
cattle

What's yer hobby?
I like photography and crochet. Also napping is a popular hobby of mine.

Infrequently I keep up with archeology. It's very interesting but I have to make a point to Google stuff most of the time.
show more
4 years ago
meaningless drivel