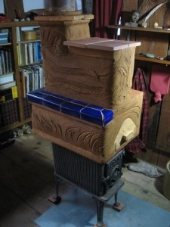 Teeny Tiny Mass Heater for Kickstarter stretch goal
Thanks for your reply and congrads with the book! I signed up for the kickstarter $ 5,00. I've never used or built a rocket stove but I am very much DIY and I would really like to try and build one.
I already found some designs on the internet but I'm clueless which of the options you are giving would best suit the needs of the people who live there. Nobody I know has an oven there. Most of the mud huts use small open wood or charcoal fires and my friend has a small charcoal burner (which produces less smoke). But you can only cook one pan meals which is really ok except for the smoke. But for me personally (I love to cook) It would be great it if I could at least heat up 2 pans at the same time and have an oven and an exhaust pipe (so the house doesn't get filled up with smoke) and if it was a simple design that anyone there could copy it would be even more amazing... - so many wants

But yes, that would be fantastic! Thanks.
show more
3 years ago
rocket mass heaters

Teeny Tiny Mass Heater for Kickstarter stretch goal
Hi! Can someone please help me to pick a stove to vote on. I am going to stay in a Maasai village in Tanzania and would like to build
a cooking stove there - so the simplest model with and oven and exhaust pipe would be suitable (preferably made of cob or / and bricks).
Most of the Maasai women get problems with their eyes and lungs when they get older because they use open wood fires to cook on in the mud huts (houses).
So It would be absolutely fantastic If I could build a stove there that anyone could copy without needing to buy tons of material.