artistic rocket stove using only 5 cinder blocks!
Hello, I built this fun experiment recently in Greece together with my mom, and though some of you might enjoy it. 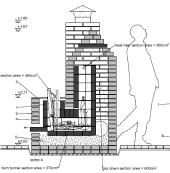 Brick RMH in public space
Hey! I forgot to share a video we made about how to make this RMH.

we have made it! I attach here a couple of pictures. We managed to skip the opening in the front, and while we had engineered a bypass, we didn't even needed it. The smoke started to come out nicely from the chimney. What we want to understand still better, is how the J-tube works, and why the opening of the feed tube is on the top and not in the front. We want to be have better arguments, when people ask. I could not find a clear explanation online about the J-tube.
One little problem is that the fire though still goes vertically- the flames are coming out on the top and not much sideways. Is this a problem of how we feed the wood? Please see the picture.
As I m writing we re in the process of heating it, the bench is already warm one hour later!!! so this is big success. You can't imagine how many passer-bys showed interest and positive feedback to it!
The chimney seemed to be working already in its lower form, but then we added some bricks because the oven-builder who came from the city to supervise us suggested it, but we re not even sure we needed them. In the beginning it seemed to work well with the lower version as well.

Brick RMH in public space
Hi Glenn, what is a bypass damper? Do you have any examples of how to integrate something like that? It sounds complicated..
show more
4 years ago
rocket mass heaters

Brick RMH in public space
Hello again! So, I had a chat with a local oven-builder. He doesn't have experience with Rocket Mass Heater, but with typical german mass heaters. He thinks that we will have problems starting the hot gases circulating in the system, because it is very cold outdoors in the german winter and we will not have any difference in temperature between the feed tube and the chimney. Normally, if it was built for indoors, we would have a difference in temperature because the feed tube would be indoors and the chimney would be outdoors. So, he believes that a) it would be very difficult to start directing the hot gases in the way they have to go, and that it would smoke from the feed tube. So, he suggested to make an by integrating a stove-door in front of the feed tube, and a removable schamotte-slab to close, when the front toor is open, the feed tube from the top. In this way, we could start the fire from there, by feeding the wood horizontally, and once the system is hot, to close that door, and continue feeding the fire from the top. He also said, that it would take 5-6 hours until the bench gets warm, because the bricks will be really cold if it's very cold outside..  I would be interested to know your thoughts on this matter. FYI, we will make the heat riser two bricks higher and the bell will also rise accordingly.
Also, how do you clean the ashes from the feed tube? We need a system that it will be easy for the people in the neighbourhood to understand how they can use it and maintain it.
show more
4 years ago
rocket mass heaters

thanks a lot! we can make the riser a little higher then, and also the bell, accordingly. We can also rise the chimney a bit more.
Let me know if you think of anything else! thanks a lot!
show more
4 years ago
rocket mass heaters

Brick RMH in public space
So, for the 'guts' of the RMH we are using insulated heat-resistant bricks (vermiculite based), while for the top of the bell (pyramid) we are using heat-resistant chamotte-bricks. the rest of the structure is normal baked bricks. Under the bench we will use vermiculate plates as insulation. And the top of the bench is concrete plates.
We think that the proportions of the feed tube and the heat riser should work now, what do you think? The cross-sectional area of the feed tube and heat riser is 360cm2, and it grows to 510cm2 or more at the bench, until it leaves from the chimney where it is only 180cm2. Is this a problem for the air exhaust?
We also designed it now in a way, as we understood from your reference, without stove-pipes: the bench is a hollow space where the air can fill it up fully. As you see on the drawing 'first layer of bricks-plan' we have put some bricks in the middle to support the bench's top. However, we are not sure if we need to fully close this line of bricks, for the air circulation. What do you think?

really appreciate your input! thanks a lot. I will study the links you have sent and come back to you with more questions.
show more
4 years ago
rocket mass heaters