Dennis Bangham wrote:Dan,
Any updates on your IBC totes and how effective they heat and cool your greenhouse?  I live in the southern USA and have been thinking about doing something similar.
I am thinking of a full diffused light (' by 20') greenhouse with sunlight coming through the roof and all the walls.  I also have a high water table and expect the temperature to stay around 55F all year round.
The lowest temperatures maybe 9 degrees for a couple of nights in winter and a couple of months of 95F during summer.

The system works really well at night. It keeps the nighttime temp at least 20 degrees F above the outside temperature.  If it is sunny, the daytime temp can be as much as 50 degrees hotter inside.  I’m pretty sure it is so high because, 1) I insulated all non-glazing walls with 2.5” foam 2) I don’t have enough ventilation, I need to open the door in the afternoon, and 3) the glazing is glass vs a diffusing material that would let in less solar radiation.
If I did it over again I am almost certain I would have used the passive open water tank that sits at the back of the greenhouse, optimizing the shape to take up minimal floor space.  In my post I added pics of a geodesic dome greenhouse with this system.
I am also working on a different glazing design in my head (maybe not needed in southern climate). Instead of double paned glass I’m thinking a single layer of woven poly film and some simple insulating shutters/curtains that open and close behind the poly film.  My logic is: minimal glazing cost, maximizes solar radiation while diffusing light, insulating shutter/curtain provides better nighttime insulation than any glazing.  The trick is of course designing simple insulating curtains.

I really like the woven poly film that I have been using, it’s much less expensive than any polycarbonate,  impact resistant and long lasting. However, the insulating factor is definitely less than double wall poly and the light transmission is about the same, so I think the main advantage is cost. 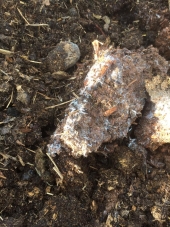 mature manure, compost or use
Thanks Bryant,

I ended up needing to use all the fresh manure and mature manure in the compost pile, and I still only made it to about 3-1/2 feet high. I will try to get more info about the hay and any animal treatments.  This type of compost pile is meant to go for 6 months to a year, so I'm curious if that is enough time to break down any of these harmful substances.
I originally left out the details about the composter.  If anyone is interested, here is a paper on the composter: Johnson-Su composting bioreactor and a youtube video of Dr. Johnson building one: youtube video
show more
2 years ago
composting
Hatch chili seed sources

Phil Stevens wrote:Dan, if you have a source of bottom heat that will help. Peppers really like warm soil for germination and 25 C (78 F) wouldn't be overdoing it.

Thanks Phil,  I will follow your advice.  I have a heat mat I have been using, I'll set it to 78.
show more
2 years ago
seeds and breeding
Hatch chili seed sources

Thanks for the advice, seed source and info on pepper grower communities.  I will check them out.  I heard about the long germination time. I put them in damp paper towels for 12 hrs before planting and so far 8 of 22 sprouted in 6 days.
show more
2 years ago
seeds and breeding
Hatch chili seed sources

Bryant RedHawk wrote:hatch chiliexpress  Why not go to a certified source?

Any time I am planning to grow from seed I do a sprouting test then I go ahead and plant the seeds that did sprout into 3 inch containers grow them up enough to survive out doors, go through the hardening off then I plant them.
You can short cut the hardening off if you have row covers.

I wasn't sure what certified seed was until now.  Good to hear you had success with Hatch Chili Express,  I just ordered some NM 6-4!
show more
2 years ago
seeds and breeding
Hatch chili seed sources

Does anyone know a good source for mild/medium hatch, ancho, or anaheim peppers?  I'm in Denver (zone 5b) and I did so-so with peppers last year so I'm determined to much better this year.   I recently ordered from Sandia Seed Co and don't seem to be getting good germination.  I soaked seeds for 12 hrs and keep them at 75F to germinate.  Any advice growing in my zone is also welcome.

mature manure, compost or use

Tyler Ludens wrote:Be sure you know what the critters have been eating:  http://www.thesurvivalgardener.com/category/aminopyralid/

Thanks Tyler.  I was told they are eating a high quality hay.  The farm has 2 donkeys, 2 goats, 1 pony, 1 sheep and about 12 chickens so it's a really small operation.
show more
2 years ago
composting

mature manure, compost or use
Hi everyone,

I’m pretty new to composting, and have been following the composting work of scientists like Elaine Ingham and David Johnson.  I’m looking for advice on composting materials I collected. I am attempting to build a large 4’ diameter composting bin. I collected manure from a friend of a friend’s residential farm (donkeys, goats sheep and chickens) and I ended up taking the more mature manure which was mixed with straw and turned periodically and looked like it was already mostly composted.  About 10% of it was pieces of manure. See photos.  My plan is to go back and get fresh manure for my compost pile to get a proper C/N ratio, and possibly use the mature manure in the garden. Is this risky? Should I put the mature manure back through a full composting cycle? Or maybe put it through a pasteurizing heat process before using it in the garden?

Kyle Neath wrote:Hey Dan! I think you picked a great forum. I also added it to the soil forum as that seems relevant too, I hope that helps.

As per your question, what you're dealing with sounds very similar to most suburban plots: growing on fill dirt. I've seen no end of successes in this context, so with enough effort and time I'm sure you can grow plenty of vegetables. If possible, I would suggest trying to save the topsoil from excavation and replacing the top layer with that topsoil. That would be the best of circumstances, but even if you can't there are many options. My personal suggestion would be to look into importing compost and mixing it into the top layer of the woofati (or just layering the compost on top too). Otherwise you can chase slower paths: growing cover crops, holding animals, compost/mushroom teas, etc. The goal will be to increase the organic matter and soil life in the bermed soil.

That’s very reassuring to hear others have had lots of success with this.  I read that roots typically don’t go deeper than 2 or 3 feet down so I was concerned how plants grow deeper. It sounds loke if I bring life and organic matter to the soil I should have success.
show more
2 years ago
wofati and earth berm
Soil fertility in excavated wofati / earth berm greenhouse

But even if you didn't do any of those things your plants will still survive, but why just survive when you can thrive, you already did so much work already just complete the process.

Thanks for the advice.  I definitely want them to thrive so it sounds like I'll be breeding life into the Wofati ground soil!  I've been getting some experience making various compost teas and making soil mixes.
show more
2 years ago
wofati and earth berm