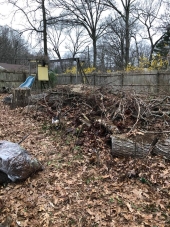 Giant Modified Hugelkultur - Need help with planting suggestions.
Awww!!! You two have kind hearts just like we do!
show more
6 months ago
hugelkultur

Giant Modified Hugelkultur - Need help with planting suggestions.
Mine is a 25 year old horticulturist. She constantly brings home plants from her job that are injured or the clients don't want them anymore. I say, what's the difference with leaves? LOL i know not to pick up grass clippings because people use chemicals on grass but very few in our area spray their trees as most are over 100 feet tall. I live in a bit of a forest though it's funny, it's called the Maplewood but all the trees are oak!
show more
6 months ago
hugelkultur 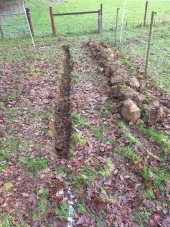 It's definitely a labor of love isn't it? Hope you have good luck with it this summer.
show more
6 months ago
hugelkultur 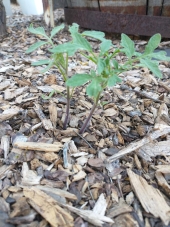 Lazy hugelkultur
What I find such a joy is the experimentation in the garden. You can try it and see if it works and if not, there is always next year! I have had many volunteers sprout and thrive in my old wood chip pile before I spread it all out. We have Oak predominantly and while it is a strong milled wood, it breaks down extremely fast in natural conditions.
show more
6 months ago
hugelkultur 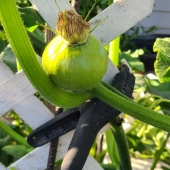 2 year hugel bed and the maxima squash dilemma
Very cool! If you are going for food value I would just let them grow and have smaller fruits, but you could also prune one plant for a fewer, larger fruits so you can have the best of both worlds.

I have to laugh, my hugelkultur has it's first volunteer sprouting and I just made it! It's a pumpkin I threw in the compost a few years ago. LOL strong little bugger!
show more
6 months ago
hugelkultur

Giant Modified Hugelkultur - Need help with planting suggestions.
I have to laugh Lila. I started picking up leaf bags for the project a few months ago and my daughter was mortified. LOL I said why waste good biomass???
show more
6 months ago
hugelkultur

Giant Modified Hugelkultur - Need help with planting suggestions.
Thanks for the input on the strawberries Ben. I have tiny wild strawberries I got from my mother in law's land in New Hampshire. I am on Long Island New York which is probably similar in climate to your NorCal area. Been up to Eureka a few years ago and other than the Red Woods we have a lot of similar flora.

Glad I could inspire you Lila! It feels really good to build in the garden with things people would otherwise throw away. Good luck!
show more
6 months ago
hugelkultur

Giant Modified Hugelkultur - Need help with planting suggestions.
Thanks Ann, I have been very motivated. The wood was an eyesore and my husband wanted to get rid of it, but didn't want to pay the price. I finally just said, I'll take care of it. I was too far gone in the process when he realized what I meant.

He loves the benefits of the garden, but not the work. LOL no big deal. I love both!

Thanks Ben, I never thought of strawberries. Do you use a specific variety? Ever blooming perhaps? Would appreciate any information. I have a ton of edge area where they could hang down.
show more
6 months ago
hugelkultur

Giant Modified Hugelkultur - Need help with planting suggestions.
That looks absolutely amazing Cindy! Thank you so much for posting photos! I also planned to plant the tomatoes on the western edge. It's almost like planning the layout of a city. Blessing your garden patch and thanks again.
show more
6 months ago
hugelkultur

Been a while since I posted, been super busy with life and work and finally last fall started getting back into the garden in a big way. I made a buried wood raised hugel bed which I will post later but my main focus this early spring has been a behemoth Hugelkultur mound.

We had a 130 year old 100 foot tall red oak that died in our side yard. The previous owner had put cinder blocks around it and mounded up dirt to try and level a significant dip in our hollow. I dug out 6 rows from around the tree, going down over six feet but there was even another row that I could not get to. These people even put tennis balls around the tree that were perfectly flat from all the growth. I was so sad to see it go but we had to cut it down.

We got a good deal to cut it down but they wanted another 2 grand to cart it off. The sections were over 2.5 or  3 feet across and ten feet long each. They fell in a kind of V shape with a bunch of large sections in the middle, so I could not dig and roll to bury them or narrow the space. After two years on the ground they were covered in lichen and mycelial growth so I decided I would try and bury it all and build a big bed over it.

I don't have photos of all the stages but I did it all myself, a 5 foot 4 58 year old lady. LOL pretty proud of myself! As the sections were pretty far apart and very tall, I was unable to cover it with soil all the way down to the ground at this point, so I covered the logs themselves with dirt then built up the walls with oak leaf mould and thick branches to make an edge to the bed. Eventually, I will build these edges out in a terrace formation and fill in with soil, but for now I already have a lot on my hands.

I seeded the whole thing with dwarf white clover because the bed is so wide, I wont be able to weed regularly. I have very good compost that I used to mix with our sandy local soil and some clay to make a good topsoil. The soil level on top is at least 3 inches deep all over. Under that is a thick layer of grass and moss cuttings and below that are copious amounts of oak leaves and then small branches, dirt/soil then the big logs. I watered it generously as I built it, making sure to soak it down at each level.

So, my question is this: The bed is over ten feet wide on one end and only 2 feet wide at the other. It is almost 30 feet long (maybe more, I didn't take an accurate measurement) and about 4.5 feet at it's highest point, but it has a lot of hillocks and valleys because of the shape of the logs and brush I used. The bottom faces south west and the top faces north east exactly, measured by a compass. It gets good light even in the summer with full sun on one side in the morning and full sun on the other side in the afternoon.

I want to ask for assistance in a planting chart. I have the following seeds already set with cold weather plants already hardening off. The warmer plants I can plant a bit later, but I need help related to where. It have been VERY cold here in zone 7a with limited rain, but we just had two good days of gentle rain, aka the best kind!

I didn't overplant seeds so with the vining plants I only have 2-3 of each kind. I planned on placing posts and trellis on the north side for the tomatoes and cucumbers and then planting things that will be long to develop like cabbages on the next level up with vining plants on the top that can trail down to the south east side as far as they want. The entire piece of land is probably 1/8 acre that hasn't been taken care of since Hurricane Sandy so I covered the whole thing with card board and leaves and will bring in wood chips to make paths and finally beds as well, but right now this is a whole lot of bed!

I do know, based on the building materials that eventually the center will fall in and I will have two more narrow beds covering all the tree trunks. I also know I need to cover the ends of the tree trunks that are sticking out to have more effective decomposition, but at this point I ran out of building materials and used up my entire compost pile and leaf mold pile, so that will have to wait for next year.

Thanks so much for any help you can offer! I really appreciate it and am so excited to get back into the garden!