Where to Buy Goumi Seeds?
I can't seem to find a reasonable source for goumi berry seeds online. The permaculture nurseries I usually go to don't carry them and the vendors I do see are very expensive and don't seem too reliable. Can anyone point me in the right direction? Also does anyone have experience growing them from seed or are they better propagated from cuttings?
show more
2 years ago
plants 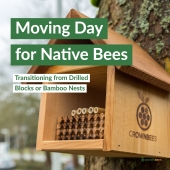 Bee Hotels: Design and Maintenance Questions
I've been wanting to make a few mason bee hotels of my own for awhile now. I was planning to use bamboo of various sizes for the tubes because I have unlimited bamboo but I just read in the article below that bamboo is not ideal because of it's lack of breathe-ability and it's hardness. Would anyone agree with that statement? My alternative would be soft pith stems from various plants I grow for biomass.

I have also been wondering how crucial is the step of harvesting the cocoons for the bees success? If I were to gift a bee hotel to a casual gardener who I know won't want to have to do much to maintain, will it still be useful for the wild bee populations and provide some pollination benefit?

Any advice and recommendations are greatly appreciated!
show more
2 years ago
pollinators
Bird Specific Housing
Thanks for the informative responses! I already make bat boxes and preach the benefits but I'm looking to add diversity to my habitat structures as well as build specialized birdhouses for clients with particular wants and needs.

I placed my bird feeder and manicured some roosting branches of a honeysuckle bush above my leaf pile so that the bird droppings add nitrogen and that has worked quite well. I've noticed several new species move into the area since I started building habitat and wanted to try and select for birds that were most beneficial or with threatened populations to house.
show more
2 years ago
predators
Bird Specific Housing
I am looking to make birdhouses with the specifications for either threatened birds of the area, birds that are insect predators, or ideally both. Does anyone know of a good resource for birdhouse designs and their corresponding residents?

Also are there any interesting permaculture birdhouse features you've heard of or had experience with that stack functions, align components, etc?

I am in NW Arkansas, Ozark Mountain region, zone 7.
Any advice, links, or PDFs are greatly appreciated!

show more
2 years ago
predators
Winterizing a vermiculture bin?
Thanks for the feedback! I think I'll build an additional worm tunnel for them. I have one worm tunnel already but I stocked it with super European nightcrawlers which are anecic and not suitable for contained vermiculture and thought I should probably keep them separate. Maybe I'll put half of them in a worm tunnel and experiment with the other half in a closed insulated unit. After checking the population today I'd estimate I have 5,000 or so red wigglers, and quite a few soldier fly larvae that showed up in the bin.
show more
3 years ago
homestead
Winterizing a vermiculture bin?
I've been raising red wigglers all spring and summer for composting food scraps in a system of buckets. Our first freeze in Arkansas is coming at the end of this month so I am trying to figure out the best way to insulate my worms for the winter. Would converting a cooler/ice-chest into my new worm bin be adequate frost protection for my wigglers or would I then need to bury the cooler in the ground as well? Another alternative to digging it down that I've considered is stacking straw bales around the sides.

Any thoughts or experience on this?
I live in zone 7, NW Arkansas. I tried locating the lowest temperature we reach in the winter and the best I could find was -3 F in extreme cases.
show more
3 years ago
homestead
A Method for Mosquito Larvae Control in Rainwater Collection
Yea I almost got BTI but decided to try something cheaper, and also multi-purpose. I use H2o2 for sterilizing rooting equipment, treating root rot, foliar fertilizing, and additional pest management. So it's one less product I have to buy if I can avoid it. However I understand BTI would be more suitable in some scenarios.
show more
3 years ago
homestead
A Method for Mosquito Larvae Control in Rainwater Collection
After reading that Hydrogen Peroxide could be used as a pest management tool to dissolve soft bodied insects I wondered what effect it would have on developing mosquito larva that have been breeding in my compost tea buckets despite adding plant matter that I thought would kill them (tobacco, ghost pepper, marigolds, nasturtium, neem). So I added a half cup each to two five gallon buckets that were full of larvae and then a full cup into two other 5 gallon buckets with larvae. The next day in both of the buckets with the full cup, and in one of the buckets with a half cup the larvae were dead. (I used 3% Hydrogen Peroxide, agricultural strength would require far less.)

Now obviously a better long-term solution would be to put netting over the buckets, however I've found the aeration from the Hydrogen Peroxide eliminates the anaerobic odor from fermenting comfrey leaves and at the right dosage (small diluted amounts) I have read it it can aerate roots and stimulate growth.

In Arkansas summer's we get a lot of rain all at once followed by long droughts, so saving rainwater is crucial. Hopefully this technique helps in the event you forgot to cover your rain-barrel before the skeeters got in.

For those who don't know Hydrogen Peroxide is just H2O2, so essentially water with an extra oxygen. After all the extra oxygen molecules are released you're left with just water.

Any thought or concerns with this technique? Anybody know of any plants that when added to compost tea, prevent larvae from developing in the first place?
show more
3 years ago
homestead

Seed Saving Procedures?
I've never heard of this 'bath' method but would be interested to hear more about it.
I would definitely store them in the pantry and not the fridge. The fridge can cause moisture to condense even into sealed containers. Another trick is to save the silica packages that absorb moisture that are often included with shoes and other products if you buy such things, and throw them into your seed vault to negate any moisture from contacting your seeds.
show more
3 years ago
gardening for beginners
Moringa Varieties?
Thanks! I've grown oleifera this season and it's done really well. I'm going to be experimenting with different techniques for over-wintering them in a temperate climate and was curious what I could do with other varieties.
show more
3 years ago
seeds and breeding