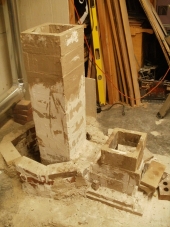 Not getting the heat I expected
Hi Erica,
Thanks for the response.
I made a mix of clay, sand, cement and vermiculite for the base.
Then I built the rocket portion with firebrick on top of that base, so it is well-insulated from the cement floor.
Then I used bricks to form the ring for the barrel and the outer wall to contain the runs of exhaust pipe.
The exhaust pipe comes back behind the barrel and then goes up to the ceiling, then it follows the ceiling to almost the peak, and then penetrates the ceiling.
I used a sand, clay and cement mix to create my mass around the firebox and encase the exhaust pipe until it went vertical.  There is a clean-out right after the ring for the barrel, at the start of the exhaust run, and another at the bend in the exhaust run.
The pictures don't show it, but I built a wall of bricks up to the level of the window, where you see cement board in the pictures.  There is also more mass (several inches) on top of the exhaust run.

The rocket ran fine last winter.  I saw barrel temps over 600 degrees, consistently.  I put one heat-activated fan on top the barrel.  A second one blowing in a different direction would probably be a good idea.  I only ran the heater for a couple hours at a time (after work).

I just ran it again, last week, twice.  The first time, it ran fine.  The second time, it actually burned backward.  I had a fire coming out of the feedbox.  I put a couple wads of newspaper in the first cleanout and set it on fire, to create a draft through the barrel and it kinda worked to pull the flame back into the burn channel, but then the flow reversed and the fire came back out of the feedbox.  So that was kinda weird.  We've had a really weird winter so far (up to 50 degrees), and I've been busy with other stuff, so I haven't tried to run it again.  After the second burn I opened the barrel from the top and everything looked fine.  I did vacuum out the feedbox and burn channel.
show more
1 year ago
rocket mass heaters

Not getting the heat I expected
I've got R-19 in the walls and R-30 in the ceiling.  I cut and taped sheets of 1.5 inch foam to the doors at both ends (2-car door at one end, 1-car door at the other).
show more
2 years ago
rocket mass heaters

Not getting the heat I expected
I live in southern Wisconsin.  This week has been warm (highs in the 40s).  It is usually in the 30s this time of year, and can get below zero in Jan and Feb.

I didn't measure, but the riser is within a couple inches of the barrel lid.  The bricks just happened to work out well.  I used regular bricks to create the base for the barrel, and it came flush with the top of the firebricks that formed the burn chamber.  I added a little cob to create a seal, so the barrel is just a little higher than the riser.

I used Vogelzang fire bricks, which are 4.25 x 9 x 1.25.  The riser is 6.5 x 6.5.  The feed tube is slightly smaller.  I don't remember why it happened, but I did cut bout 1.5 inches off the bricks that go across the firebox on the two courses that make the feed chamber, just so they didn't stick out.  One of the images I attached to this reply shows the stick-out before I cut the brick down.

I think I've mixed six batches of cob so far, maybe seven.  The ducting in the mass runs from right to left, makes a u-turn, and comes back past the barrel and then goes up.  I shimmed with bricks at each turn in the ducting, so each run ends a brick higher than the run before it.  The run closest to the wall is actually two bricks higher, because it is longer than the first run.  Currently the cob covers all the ducting up to the elbow that changes the ducting from horizontal to vertical.  I have enough materials to make two more batches of cob.  I think I am going to make a wall of bricks behind the vertical ducting, to give the wall more mass.  I had several days between the first couple layers of cob.  Layers 3, 4 and 5 were added within couple days of each other.  I just added a layer tonight.

I stayed with the fire as I worked the cob tonight and added wood as I went, for a longer burn.  It actually went up to 600 during tonight's burn.  It's only burning about the equivalent of a 6 foot 2x4 each time I fire it up, so I am happy about that.  I guess it is just a matter of firing it every day for a while.  I am getting some water oozing out onto the floor in a couple places.  Claudia at Cabin Talk on youtube showed that happening during her build.

Is there any reason NOT to put a stove fan on top of the barrel to move heated air around the space?  I feel like that would help a lot to warm the space more.
show more
2 years ago
rocket mass heaters

Not getting the heat I expected
OK, thanks!  I don't remember my exact thought process to arrive at the decision to go with a six inch system.  I think I was at the hardware store and saw the six inch ducting, and went with that.  I watched a lot of videos and bought Ernie and Erica's book, but never got too caught up in the math.
show more
2 years ago
rocket mass heaters

Not getting the heat I expected
I built a 6 inch version of Ernie Wisner's RMH.  I installed one inch foam and cement board on the bottom and sides of the site.  I have about 15 feet of ducting through a sand/clay/portland cement mass before venting up and out of the roof.  I have a temperature gauge at the top of the barrel (not on top).  I've fired it about ten days, so far.  I get up to 500 degrees at the top of the barrel, and I can keep my hand on the vertical exhaust ducting, above the mass, so the heat is staying in the system, and not getting ducted to the outside.  But, I can still see my breathe a foot away from the barrel, and the mass does not feel warm.  I have to work to get the temp to 500, using finely split, really dry wood.  It gets over 300 pretty easily, and seems to generally run around 400.  I'm heating a 20x30 shop.  The RMH is centered in the room, along one wall (the barrel is just over 18 inches away from the wall.  I only have a couple inches of mass on top of the horizontal ducting, so far.  I have materials for a couple more layers which would equate to a couple more inches of mass.

Anyway, I'm not getting the room as warm as I expected, and like I said the mass isn't getting warm, like it is talked about in the videos I have watched.  Lots of people have said their mass bench is too hot to sit on directly.  But, the heat is all getting stored somewhere.  I'm considering getting a thermal fan to put on top if the barrel to move the heated air around the shop more.  Does it take a number of burns to get the mass heated up?  Should the barrel be getting hotter?  I built the riser out of thin firebrick and clay slip.  I did not wrap the riser in ceramic cloth or anything like that.  Any ideas why I am not getting the heat I expected?
show more
2 years ago
rocket mass heaters

Clay flue pipe for the riser
I've ordered the book.

Is there any reason you can't use cement in the bench mass?  I have a lot of broken up concrete from a previous project.  Once you prove your system, you can encase the bench ducting, permanently, right?  Is cement better or worse than cob for banking and radiating heat?
show more
3 years ago
rocket mass heaters

Clay flue pipe for the riser
I watched a video where either Ernie or Erica said that the metal barrel is important because it loses heat quickly, which helps the hot air to fall to the bottom of the barrel.  If you build the outer barrel from masonry, does that change the dynamics, somehow?  Like, will it radiate less heat from the barrel (hive? bell?)?  Would that, in turn, mean that hotter air would make it to the ducting and mass, and therefore your exhaust would be hotter, unless you have enough mass to soak up the heat?
show more
3 years ago
rocket mass heaters

Clay flue pipe for the riser
Hi everyone,
I am assembling the materials to build a rmh.  All I need at his point is the pouter barrel and some perlite.  I've watched a lot of videos, and I have a question about the riser.  Is there any reason I can't use clay flue pipe?  Would it need any other insulation around it?
show more
3 years ago
rocket mass heaters
Why is the barrel exposed?
So, if I understand this correctly, it would be beneficial to have some kind of mass on top of the barrel, e.g. a stack of bricks or a slab of soap stone?  A mass of cob would be rigid and would crack as the barrel expands and contracts, so it needs to be a material that can move.

Has anyone tried building a wall of bricks or some other mass around the barrel, without actually being in contact with it?  (Some kind of reflector?)  I'm imagining a half circle, going around the back of the barrel, with the front exposed.  I'm thinking of a system for my shop, and I don't really have a place to encase a run of ductwork, so I am trying to maximize the mass right around the unit, itself.
show more
3 years ago
rocket mass heaters
Why is the barrel exposed?
Is there a critical ratio for the distance between the wall of the riser and the wall of the barrel? Can there be too much space between them?  Is there a minimum space?
show more
3 years ago
rocket mass heaters