Do you think it would work well to espalier Hazelnut trees?

I wanted to grow them along the garden fence (which will be 32 ft long and about 5 ft high). I know I've seen them grown as a shrub-sized thing before, but I wanted to check in and see if anyone out there has tried this, might have some insight into the project, or knows why it wouldn't work.

That being said, are there fruit/nut trees that are decidedly not good for espalier-ing? 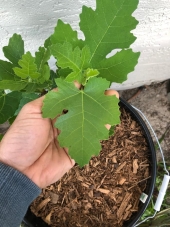 Re-potting (2nd time) yesterday revealed that the soil was indeed WAY too wet and also that some of the root systems of the failing figs weren't too stout (I probably damaged them the first time).

The re-potted figs probably won't make it- I think they just took too much abuse. I'll try again next year (the parent tree is at my grandparent's house in TX), but I certainly learned a lot this year. Thanks all for the tips!
show more
4 years ago
fruit trees

After further close inspection, I might have two different issues going on. First, before I transplanted the figs, it seemed that leaves were turning black and crispy from the tip and moving toward the stem until they were all curled up. Or, some leaves would look fine one day and then the next they would just drop off. I had potted my cuttings for the first time in February and since it was April and they all had lots of new leaves, I thought maybe it was just time to re-pot them.

So I re-potted each fig into it's own small container using some of the old potting soil mixed in with compost and leaf mulch on top. Then, since the day was getting hot and leaves were starting to look wilt-y, I heavily watered each fig. That might have been too much.

Now, it seems that the black crispy problem isn't developing (though I'm still trying to nurse back the victims from before), but entire plants just become wilted and limp. I had one especially vigorous cutting that I was very excited about, but over the past 3 days it seems to have gotten weaker and weaker, until this morning, all of its leaves are hanging by its sides and soft. On the other hand, I had one cutting from before that didn't look too hot and since re-potting it has tons of new growth and is looking great.

I don't think it's salt, because I'm not sure where it would have come from (we're on well water), and I haven't seen any salty accumulation on the sides of any pots.

It probably could be nitrogen? Maybe from compost that wasn't quite finished. Actually, now that I think about it, I don't think I mixed in any potting soil with the first 4 or 5 fig re-pots and just used compost and some left over crazy dirt (soil we buy from a local lady that's completed compost basically). Then, by the time I was potting the last fig, I didn't have much compost left, so I mixed in lots of potting soil (and that one happens to be the one fig that's doing well since transplant).

So, maybe today I will try to re-pot the wilting figs with a higher potting soil to compost ratio and water just a bit. Thanks for walking me through this Steele!
show more
4 years ago
fruit trees

Fig cuttings acting strange
Alrighty- that settles it. Way too much water. Dern. Anybody think I could snatch these figs from the jaws of death by repotting them again in something a little less dense? Or should I just ride it out and try again next year?

Fig cuttings acting strange
I have some fig cutting questions too! I put my cuttings in potting soil at the end of February and they all did well, but now the leaves are turning black and crinkly (sp?)... I know they’re getting enough water- could it be too much water? Or some sort of nutrient deficiency? I re-potted then this week and it doesn’t really seem to have helped. I’m worried! They started off so strong and now I’m nervous that I’m going to lose them all. Any thoughts y’all?
show more
4 years ago
fruit trees
Bill Mollison's Chicken coop + greenhouse?
I guess I'll try to think of some other arrangement for the chickens, but I like the idea of wood chips instead of straw- seems like that might help cut down on the dust issue, especially if my wood chips are damp. I might clarify that the chicken coop was going to be inside the greenhouse, but the chickens wouldn't be running around free in the greenhouse. Does that change anything for anyone?

Does anyone have any suggestions for another mutually beneficial chicken housing arrangement? Is it a good idea to let the chickens free range in the garden? And! Would it change things if I kept ducks instead of chickens inside the greenhouse?

Lots of questions. Thanks for the input everyone!
show more
4 years ago
chickens
Bill Mollison's Chicken coop + greenhouse?
Hi all-

I recently read Bill Mollison's original book on permaculture and there was an interesting idea/drawing about incorporating your chicken coop into your greenhouse. I wanted to start designing my own coop/GH complex, but what about the ammonia?

Bill says to separate the coop and GH inside with wire mesh/fencing so that chickens can heat the greenhouse and the plants can use the CO2 and moisture from the chickens. As I was thinking about how to situate things for maximum user-friendliness, I was thinking about how to clean out the coop and a recent article about chicken poo and a gasification plant came to mind-- will the ammonia trapped in the greenhouse build up to nasty/unhealthy/potentially harmful levels? Is it safe to be mucking around with chicken poo'd straw in the closed space of a greenhouse?

Any other thoughts about this kind of design or has anyone had any luck actually building/using one?

Any help would be appreciated. And I apologize if there's anything obvious that I've missed. I'm new : )