author
+ Follow
7 Posts 0 Threads 7 Apples
since Jul 21, 2018
Merit Badge info
Fay Weller is the co-author of "Changemakers: embracing hope, taking action and transforming the world". She is also a community organizer, homesteader, researcher, and artist with a PhD. focused on social transformation. She and her partner live on Gabriola Island, BC, with two sheep and numerous chickens.
Gabriola Island
Changemakingca.wordpress.com
Apples and Likes
Apples
Total received
7
In last 30 days
0
Total given
0
Likes
Total received
20
Received in last 30 days
0
Total given
0
Given in last 30 days
0
Forums and Threads
Scavenger Hunt 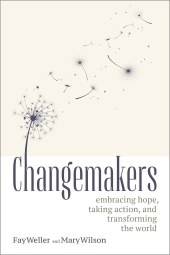 * Welcome Fay Weller & Mary Wilson, authors of Changemakers
Congratulations to the four winners! I really appreciated all of the thought provoking posts. And thanks again for inviting us to participate on the forum as authors. I really enjoyed learning about the Permie world and look forward to engaging in further conversations.
show more
1 year ago
decision making

* Welcome Fay Weller & Mary Wilson, authors of Changemakers
Thanks!
I am really enjoying a chance to poke around through the various forums. This is the first time I have joined a forum and I'm blown away by the discussions and ideas on this site - diving into one on how to up-cycle glass to another on mulching and/or irrigation. Thanks so much for inviting us and welcoming us!
show more
1 year ago
decision making
Discuss: Alternative Exemption from Society vs. Fixing the System from Within
This thread echoes conversations we had with many of the storytellers in our book. I would like to quote one of those as I think he describes a way of living that life of integrity within the current system, while at the same time shifting the culture away from what is fundamentally flawed with that system:
"Once you have a different mode of thinking, you can either create a new system or you can shift the existing system. You can use the new way of thinking in the old system, and in some cases that's effective or efficient. A lot of times it's efficient because there's such a huge infrastructure built up. so we're going to get rid of all the cars, but we're going to keep all those roadways because they're great bike pathways. We're not not going to tear out all the roadways and then make new bike paths."
A further excerpt from the book that relates to this: "The shift to ecological rather than economic thinking is not a straightforward one. Transition options can be a pathway towards an alternative system. They acknowledge that we are often wavering between two ways of being, with dominant culture stories still embedded in our decision-making, even after that flip to a different mode of thinking."
show more
1 year ago
decision making
Making Changes as a Senior Citizen
Hi,
I think retiring from traditional work is a great time to start homesteading. I also started when I retired from paid work and have found that homesteading is change making as well as providing a grounding in creating other change in community. On a personal basis my health has improved through amazing food and reduced stress, and my sense of food security has increased. What a joyful way to live!

It might be worthwhile contacting conservancy groups in each of the different states and asking them what endangered plant they feel should be the focus for their state.

In your conversations with these other groups ask for ideas about how to get the word out – these ideas can then be shared on the website and with each of the conservancy groups across the country.

I think the groups would be thrilled to participate if you are managing the site and they can focus on getting the word out in their state.

show more
1 year ago
decision making
5 Things an Ordinary Person can do to Change the World
Hi Féidhlim,

I love your 5 points. At the heart of each of them is integrity -– ensuring actions and values are aligned.  This is something we talk about in the book. Another aspect that would underlie each of these but isn’t explicit in your points is compassion. Compassion for others, trying to understand their stories and why they might be acting at cross-purposes to the shift to a more just and ecological society.

I think 4) hold hands, and 5) hold the vision are symbiotic - it is so much easier to hold the vision when we are working with others also focused on aligning values with action.

* Welcome Fay Weller & Mary Wilson, authors of Changemakers
Hi Michelle,
Three keys for me - making change happen in my local community, making change with others based on our values, and connecting with other communities wanting to make similar change happen. There are numerous stories in the book describing a range of people carrying out change in their communities. Many of those changes have then spread further through networks of enthusiasm and inspiration.  My favourite personal change story is the Gertie community bus story, an idea currently spreading to other communities.
show more
1 year ago
decision making