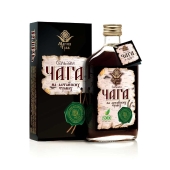 John Saltveit wrote:I talked to a friend who knows Russian, and this is their interpretation:


It says Balsam Chaga. Apparently Chaga is a type of mushroom. Then it says on Altansky  grass. I tried to find out what Altansky means and what I found was the Altan was the word used to Golden is reference to the Golden Horde (meaning Mongols) and not the usual Russian adjective for Golden.

John - thank you for your research - that is really helpful. My college which gave that to me talked about some kind of grass - so now you made it clear for me. Tnx
show more
2 years ago
fungi

Can mushrooms cure cancer?
Hi to all - i am new here and i have a quick question - i received this thing as a gift: https://www.moja-lekarna.com/content/images/thumbs/0048356_crna-sibirska-caga-balzam-na-altajskih-travah-250-ml.jpeg. I just can not read Russian, but i think it is some kind of chaga - right?

I tried it and figured out it is insanely sweet.

Then i read somewhere that it is not ok to drink such sweet things if you have cancer etc. Please help me out  - what do you think. The growth of cancer cells is faster if you eat a lot of sugars - right?