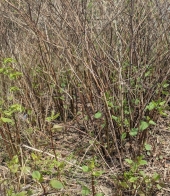 What do you think the knotweed and black locust might be telling you about the soil in that area?
On our land, we found the greatest density of knotweed in the most compacted, clay heavy soil. It even broke a rock it wanted to grow through!
Since it sounds like the knotweed is on the edges, I would just mow or machete it frequently. It will take time, but if it never gets the chance to photosynthesize, it will weaken and die eventually.

Its roots can extend quite a distance from where you see shoots. I would be extremely cautious about transplanting other plants in the vicinity to elsewhere, lest you inadvertently spread knotweed to other properties. Maybe make a habit of either growing in containers or removing all soil from the roots of plants grown in the ground and checking for knotweed roots before sending them elsewhere. I would highly suggest familiarizing yourself with what the roots look like so you can be sure you aren't spreading them. They can regrow from very small root fragments.

For perspective, the land where I live has quite the Japanese knotweed presence. Probably about a 40 foot diameter circle of it. We are unwilling to use poison and it doesn't sound like it works that much better anyway. We have tried several tactics over the past two years we've been managing it. It is still present, but we have learned a lot and it does seem to be weakening considerably. We chose to site our garden where it grows, partially because it would encourage us to stay on the knotweed removal. At first, we tried eating it. Tasty, but couldn't eat much before the high oxalic acid content became apparent and unpleasant. We picked tons of shoots in the early season and sold them to a fancy restaurant. We cut down their stalks as often as possible, but definitely before they could flower. We eventually decided to dig out the largest clusters of them and then burned them along with all the honeysuckle we cut over the spots we dug them from. We spent a lot of time tracing the smaller roots and digging them too. Since all that, we have just been pulling the shoots as soon as we see them to stop them from photosynthesizing. If I had it to do over again, I wouldn't have wasted my time with tracing down smaller roots. I do think digging out the largest clusters of roots was worth it. Though I really wish I'd either dried them or made them into a tincture, as Japanese knotweed root has many medicinal properties. Honestly, I think that continual cutting is the best strategy. Surprisingly, growing pumpkins over it was quite helpful in setting it back too. They out competed it for resources enough that it rarely got above the pumpkin leaves. It seems too that the more we let other "weeds" grow that break up compaction, the less successful the knotweed becomes. 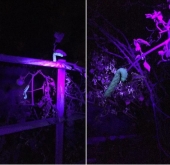 UV flashlights for homestead use
Thank you, Pearl for working your magic! Sorry for the accidental hijack!


Christopher Sheperd wrote:Where would I find a nice robust flashlight style one to use on the farm?


I wouldn't call it robust, but we got ours at a Meijer of all places for about $10. There are definitely more expensive and perhaps nicer ones out there. But this one seems totally workable.


Jay Angler wrote:OK, now I'm curious - anybody know *why* these things glow under UV light? Is there some evolutionary benefit, or is it just left-over genes from when we all lived in the ocean?

I wonder that too! One thing I recall reading about why it supposedly shows up lice or mites is that they have chitin in their exoskeletons. Though I wonder if that really is it, because I shone the light on a wolf spider, who presumably also has chitin in its exoskeleton and saw no fluorescence. On the other hand, fungus also contain chitin and those definitely fluoresce strongly.

You know you're a permie when...
Oops, sorry for contributing to a thread hijack...

When your partner goes looking for you in the garden but can't find you for awhile because you were crawling on the ground after a new and mysterious insect you saw so you can find out who it is. And what its role in the ecosystem is.

When the song stuck in your head is almost invariably one by Formidable Vegetable.
show more
5 days ago
meaningless drivel

UV flashlights for homestead use

Carol Denton wrote:And, tomato hornworms glow at night using a UV flashlight. Even the tiny quarter inch ones light up. Take a jar of water with you.


Very cool! Supposedly, so do chicken lice and mites. Haven't found out for sure, hope to never find any to try it on. I just now realized if those glow, maybe chiggers glow too...This light is turning out to have far more potential uses than I ever imagined!
show more
6 days ago
gear

Remelle Burton wrote:Then, I put that sharp construction metal sheeting on the joists

Anyone know what that stuff is called?  That looks like the perfect solution for under my floor.  I was going to use hardware cloth, but this looks better.

4 week old chick won’t stand up
Hi Jessica! That's unfortunate they weren't able to offer more help. Have you tried something like Sav-a-chick? It's a powdered combination of vitamins and electrolytes you can mix into their water. Might see if that gives her a boost, since a vitamin deficiency could cause what your seeing. You might also check out this video, I have found this lady to be very helpful in learning about more natural ways to care for chickens.
You mentioned that she only eats if you put it right in front of her. Does it she seem like she can see? Anything look unusual about her eyes?
Do make sure to wash your hands between handling this chick and your others, in case there is something contagious. Was this chick vaccinated for Marek's disease? Paralysis can be a symptom of that, but her difficulties could just as likely be caused by something else.

Jessica Briody wrote:I had decided to put her out of her misery and then last night and this morning I watched her stand up and puff her feathers. She was only up for a second before falling down but it was enough for me to keep going for a little while longer and see if possibly she’s improving. Might be wishful thinking!! Thank you for asking about her!


That sounds like such a tough place to be in, trying to do what is best for the chick but without knowing what is going on. I hope she gets better! Of course!
show more
1 week ago
chickens 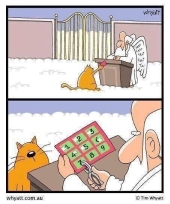 Just checking in
show more
1 week ago
dogs and cats

4 week old chick won’t stand up
How is your feathered friend doing, Jessica? Was the vet able to shed some light on the situation? Hope all is well!
show more
1 week ago
chickens

Heather Sharpe wrote:I ended up ordering these Bisgaard boots since they specifically mention having a wide toe box, along with being zero drop, flexible soled and everything else on my list. Plus being cotton lined! I will report back when I get them. Thank you all for the help! Hope all in search of such boots can find something that makes their feet happy!


I got these and have tried them on and walked about the house in them, but haven't had the chance to wear them to work in yet. I will say that they are definitely more comfy than any other rubber boots I've tried. The toe box is wider than most, but not as wide and roomy as my Lems. So I wish they were a bit bigger there. I suspect if I got the next size up, the toes would be fine, but then I'd have too much heel slip. Overall, I feel like they're pretty nice boots. They are zero drop and flexible soled. They have that weird little upward curve at the toe that most shoes have for some reason I don't understand. They seem very well made and have almost no smell, which is great since I am very sensitive to such things.
show more
1 week ago
gear
Shielding worms from patio (& vice versa)
It does seem there are many theories about why they surface after a rain. Sounds like the one most of us heard about them drowning isn't necessarily the case, at least not for all worms. This article suggests that they are using the wetter conditions as an opportunity to migrate more easily than they could underground. If they're trying to migrate across concrete, obviously that wouldn't go too well. I would think a physical barrier would be the way to go, as then they couldn't get up onto the patio and get stuck. Not really sure how tall it would need to be. I don't imagine worms are skilled at climbing, but I could be wrong. If it were me, I'd use logs along the edge, though I know that isn't everyones preferred aesthetic. Maybe mulch mounded up slightly or some kind of stones or bricks? Seems like any kind of deterrent based on scent or whatnot would be likely to wash away in the rain.
I also wonder if soil compaction caused by the patio construction and/or chemical leaching from the recently poured concrete could be increasing the issue? Maybe adding organic material like leaves or mulch to the soil around the patio would make them less inclined to go in search of greener pastures and end up on the patio, if that is in fact what they are doing? Hope you can find a way to keep them alive and happy in the soil!
show more
1 week ago
critter care