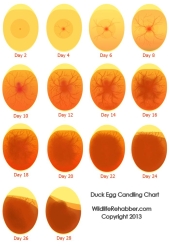 it looks to me like egg #1 was rotten, but the other three looked ok. Cant tell if they sre fertilized from the pic

Its been a few weeks since your post. Any new updates on what happened with them?

A few eggs have died but I have 12 now. Some have heartbeats, and they’re in an incubator now. They seem to be growing fine.
show more
1 year ago
ducks and geese 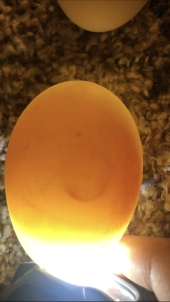 Duck Eggs
I waited to see what they’d do because I knew blood rings expanded, and #3 did expand so it was a blood ring, though when I cracked it open there was no duckling, even though it was one of the older eggs. The other two seem the same, and there is a pink dot in the center of both. In a previous egg I had go bad, there was a duckling about that size inside. I will continue to watch but it seems like they’re doing fine.
show more
1 year ago
ducks and geese

Duck Eggs
Update to my previous post. I have a couple eggs with vein-like circles. I’m no duck expert but I’m wondering if they’re growing properly. Ay advice? These are only 3 out of the 11 I’ve found. Three have gone bad so far.
show more
1 year ago
ducks and geese

Duck Eggs
Update: just found two more eggs. One was in a mud puddle and the other two inches from the pond. Here are pictures of candling all four. 1:cracked one from the yard (3 days) 2:underwater in the creek (2 days) 3: Next to the pond (1 day) 4: In the mud puddle (1 day). All sink in water.
show more
1 year ago
ducks and geese

Duck Eggs
We have four drakes and two females. We’re getting more females in the spring to balance things out, since their genders were unknown when we got them. Despite having only two females I never see them fight and they are always stuck together like glue. The ducks, even being hand raised inside our house, will not go into the barn where we have their nesting area. We’ve even tried corraling them and luring them with food, but they will absolutely not go inside. I’ve turned up the heat a little on the eggs and I’ll wait a week or so before I make any immediate decision on them. We didn’t expect these eggs to live in the first place, but we’re just going to hope for the best until we find out.
show more
1 year ago
ducks and geese

Duck Eggs
This is our ducks’ first winter/spring. The weather has been hot and cold for a few weeks and one of our ducks (none have ever laid eggs before) has been laying eggs haphazardly. I’ve only found two because one was underwater in our creek (It’s where they like to hang out) and one was in the middle of our yard. I would have left them alone if not for the haphazard placing, one was a tiny bit cracked, and the ducks wanted nothing to do with them (even going out of their way to avoid them like the plague). I put a bit of candle wax over the cracked part of egg 1 because nail polish just wasn’t cutting it this time, but after some liquid leaked out, there was a rather large bubble in the egg. The egg from the creek (egg 2) had a smell but it’s gone away after a little incubation and is very heavy. They both sink in water, but now 3 days after finding egg 1, I can no longer see the bubble and there seems to be something moving inside when I turn it. Egg 2 is the same after day 2, no smell. I’ve been incubating them at about 95-ish degrees and they’re both warm to the touch. The trouble is that I can’t properly determine a fertile egg by candling, so any help in this situation would be much appreciated.
show more
1 year ago
ducks and geese