Comfrey - Bocking 4 vs Bocking 14: How to differentiate?!

Burl Smith wrote:I am under the impression that one has pinkish flowers and the other is more blue. Like you I tried to plant one for the fertilizer aspect and the other for possible nutrition, but both of my orders turned out to have the pink flowers so I think I got gyped.

I have Bocking 14 and the flowers are blue.  If you want to trade some roots or small plants, let me know!
show more
8 months ago
plants 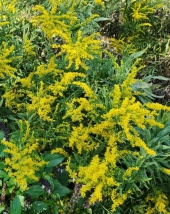 Putting "bad" "weeds" to good use
Just before Japanese stiltgrass seeds out, I grab handfuls to use as a straw mulch in the beds. It is quick work to pull up a sizable amount.
show more
1 year ago
dynamic accumulators
Poison Ivy
I am another who is highly allergic to this demon vine.

There was a patch of it around the base of a tree and after ignoring it for 15 years, it had risen to the top of now dead tree and spread out in a huge patch.  I would have continued to ignore it if my cat did not wallow in it and then rub all over my face, neck and chest.  I missed two days of work, had two rounds of prednisone and a steroid shot but still was miserable.

I eradicated it by covering my hands and forearms with bread bags and methodically pulling it up over a period of a month or so. In order to keep the vines from swinging around, I would pull a piece of the vine and "fold" it up using my bag covered hand. Repeat until I had a large handful or the bag began slipping down my arm.  At this point, I would pull the opening of the bag (by my elbow) away from my arm, encasing the poison ivy in the bag, then throw the lot into a contractor bag that was folded open over a trash can, making sure the bread bags did not come in contact with the top 15-20 inches of the bag.  Then I would tie it closed and dispose of it.

I keep bags on hand for the occasional stray plant and have great luck keeping it under control.  Spring is the best time to get at it, before the leaves are so large and floppy.
show more
1 year ago
plants