rent in exchange for farm help - rabbitry
Please note that this person has posted once, 8 years ago, and has not been back since.

I'm not saying they'll never respond, but the chances are very, very slim.
show more
1 week ago
land shares
What's the best winter squash to use immature as summer squash?
I like butternuts as dual-purpose squash. I used to grow Zucchetta Rampicante, but now I use Bigger Better Butternuts. The flavor is similar between the two, but BBB keeps longer. (ZR keeps well into April if not damaged, but BBB can keep over a year and into December.)
show more
1 week ago
gardening for beginners 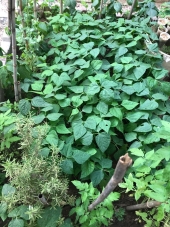 How to Grow Organic Dragon Tongue Beans
If you plan to save seeds from this variety, be aware that the pods are definite "soakers". In the drying-down stage they will absorb water like a sponge, and hold it for an impressively long time. This increases the risk of sprouting and mold. If you're in an area with damp autumns, you'll probably need to pick pods as soon as they mature, and bring them inside to finish drying.

I suspect that this trait could be useful in dry areas. Instead of shelling the pods meant for seed, clip them into 1-seed sections and plant them like that. The pod will soak up any water and act as a tiny reservoir. You could probably even crush the empty pods and add them to the soil near other kinds of seeds to get the same effect.
show more
3 weeks ago
gardening for beginners 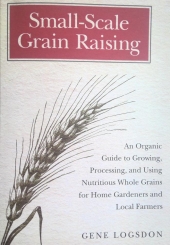 Some real potential problems with food in the Mid East, around the world

Casie Becker wrote:When my mom started reacting poorly to wheat I started using ground millet instead of flour to thicken gravy and sauces.  It worked well. Does anyone know why millet isn't a popular grain crop?

I'm told that in some cultures it's considered a "poverty food", or "only fit for animals". I suspect that stigma has a lot to do with why it isn't more popular.

Personally, I thought it tasted just as good as other grains. It's on my list of things to plant this year. I'm a bit late getting the ground prepared this time. It rains just often enough that it's hard to get out there.
show more
3 weeks ago
meaningless drivel
How soon or late can I harvest garlic just to keep it going?
If all you want is to keep it going, you don't need to harvest at all. Left in the ground, the garlic will continue to grow and multiply as clumps, becoming so dense that it chokes out weeds on its own.

I had that happen. One year I had some health problems and couldn't keep the garlic patch weeded. When harvest time came, the weeds were so thick and my stamina so limited, that I just wrote the patch off as a lost cause.

About 3 years later, I decided that section would work well as an apple/berry patch. The weeds around the perimeter were tall enough that I had assumed the entire area would need reclaimed. To my astonishment, the weeds around the perimeter were the only weeds that survived. The rest of the area was covered in a thick carpet of garlic plants! The bulbs themselves were so small they looked like scallions, but the plants didn't seem to care. I dug up part of a clump to use as green garlic, but left the rest alone. Later that year they formed so many scapes that I was able to use scapes in place of normal garlic all year long!

Last fall I decided to do this deliberately. I planted garlic under some berry bushes and fruit trees I had just planted, with no intention of digging the garlic up. I'm hoping it fills in the space and supplies lots of garlic scapes, while otherwise tending itself. I call it "feral garlic".

So, if harvesting is going to be too much of a burden and you just want the garlic to survive, feel free to leave it alone. Chances are, it'll do just fine.
show more
3 weeks ago
propagation
Supplemental Bicycle generator

For anything else, given the time and calories a bike generator requires, I think it might be more efficient to figure out how to do the job without electricity.

Depends on both the task and the person. I have strong legs but bad shoulders. There are a lot of tasks I wish I could convert to pedal power. Some could, theoretically, be run off the bike directly, with the right adapters. But if you don't have the adapters, using the bike to charge a battery might be a workable second-best.
show more
3 weeks ago
bicycle

How to make sunscreen plant based.
I don't know about plant-based, but I have heard of people coating their skin with a thin layer of mud or clay. This accomplished 3 things: It helped keep them cool in hot weather, it protected their skin from the sun, and it made it harder for biting insects to get through. Not impossible, mind you. Just harder.

I don't recommend doing that in public these days. Especially if you are a Caucasian person and the mud is dark! But if you're on your own, on your own property, it might be an option.

Are cloaks practical?
I like cloaks for when the temperature is too hot to wear a coat, but too cold to go without one. I even used to keep one near my desk when telecommuting. You can adjust the drape of the cloak to suit the temperature a lot more easily than you can with a coat.

Including biochar with commercial fertilizer?
I think another promising inroad might be with animal feed. I know when I give my critters a little food-grade charcoal every day, their poop doesn't stink nearly as bad. It's especially noticeable with my two cats, who love to hold "competitive pooping" marathons. If they don't have charcoal for a few days, the stench is eye-watering! It doesn't matter how recently their litter was changed, nothing will contain that smell! But a tiny pinch of charcoal, mixed in with their squishy food, and suddenly there's no smell anymore.

What if that was the selling point? With more suburban areas expanding into farm country, controlling odors can go a long way toward easing neighborly tension. And the benefits it would have on soil could be presented as a bonus.
show more
1 month ago
biochar

Beet greens aren't just edible, they are good for you
Personally, I think beet greens taste better than chard. I'm not much of a "greens" person, but I sometimes chop some beet greens and mix them in with my spaghetti sauce a few minutes before serving.
show more
1 month ago
gardening for beginners