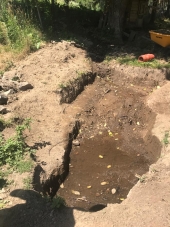 We have a bit of a unique water set on our property and I’m hoping to get some advice on how to harness it.

Our property sits in the inside walls of a small valley, with a spring running down into the lowest spot, and the house is up kind of built into the side of the southeast facing hill. The previous owner had run a hose system up from the spring so she could water gardens and such with the spring water. So, when we got here there was a hose dumping out a constant flow of water, year round, into the yard. Needless to say we were excited to find a more effective system.

Now, we’re wanting to build a relatively small pond that will feed out into some raised beds and then eventually into a drip irrigation system for a tree grove down hill further. We also have dug it out big enough so that we can sit in it in the summer when it’s hot. Okay, Done with background.

So I’ve been trying to avoid using a plastic liner, but so far what I’ve heard as an alternative to that is bentonite clay, which would be far above our budget. I’ve been thinking that our soil has enough of a clay content (just a guess from looking at it) that we could get away with puzzle piecing big flat rocks on all the surfaces since we’ve got quite a few sitting around. Maybe filling in the spaces with gravel would be enough to keep it from draining out? Or maybe we could just fill in the spaces of the rocks with b. clay so we don’t have to buy so much of it? My partner doesn’t think it’s worth the risk of going through all of that work and having it fail. I don’t disagree.

Next question, since the pond would be fed a continuous flow of clean water, would we have to worry much about gunk building up on the rocks? I know oxygen is important, and multiple depths, and plants, so we have all of that built into the design, but is all of this enough?

Here are some pictures: 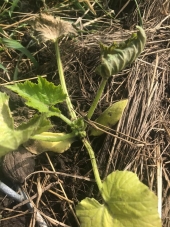 Cucurbits dying after transplant
Hello everyone, I’m not sure if people are still visiting this thread but in case anyone does come around with similar issues I wanted to update. My zucchini are looking better than anything else in the garden at the moment. The weird transplant effects have been replaced by lots and lots of leafy greens and beets being chomped on.

I kind of just waited to see what would happen to them, not addressing any kind of possible fungus issue. So I think that those who mentioned transplanting issues/cold damage may have been right, because they’ve kind of just bounced back and are doing great. Like said, better than everything else I’ve planted.

Cucurbits dying after transplant
Thanks everyone for the thoughts! So it may be that the soil is still too cold for the plants and that’s why some of them aren’t doing so well, is that what people are suggesting? I didn’t really think of that, but it makes sense! It’s been really warm here in this part of Idaho, ranging from high 60’s to 80’s so I started putting things in the ground, not really realizing the ground might not have warmed up yet.

A little update, some zucchini look like they’re doing pretty well, others not so much. I don’t think any of the squash made it, and whatever cucumbers are still alive I don’t think will be much longer. I will try direct seeding, thanks for the suggestion.
show more
8 months ago
gardening for beginners

Cucurbits dying after transplant
Thank you James! I’ve got some compost going and a worm bin with some juice being collected under the drain, but I am a beginner to it all so who knows if I’m doing any of it right! We shall see. I will check out the inoculants for safe measure. Fingers crossed!

Michelle, there is one in relatively close proximity (about 30 feet or so), but it’s more that the garden is somewhat downhill from the tree so the nuts get all over. I have read about the issues black walnut trees can have on garden vegetables. My partner and I “inherited”/took over caring for the property and the garden was where it was when we got here, so we’re working with what we’ve got. But if you have information or tips I’d be glad to hear some.

Cucurbits dying after transplant
Thanks for the speedy response you two! Maybe I will try the same, replanting later on. So once the temps warm up these fungal issues won’t be as likely to happen? Is there anything else I can do to prevent it from happening again and should I be worried about it spreading to my other plants? I will also do my own research, thanks again for the insights!
show more
8 months ago
gardening for beginners

Cucurbits dying after transplant
Hello! I am a new gardener in Idaho. I’ve recently transplanted a bunch of my seedlings into the garden. Most of the plants are looking really good, except for my zucchini, squash, and cucumbers. Just a day or two after I put them in the ground they started to dry up, turn brown, and wilt. The pictures I’ve added are just the zucchini. The squash and cucumbers are in even worse shape. I’ve been reading up different cases of wilt but I’m not finding much that seems to apply to what I’m finding.
I’ve also just discovered that my beans look like they are beginning to decline as well. Could it be that the roots aren’t getting enough oxygen? If so, is there any way that I can help with that situation or are they doomed?

Thank you in advance for any insights!
show more
8 months ago
gardening for beginners

Can I build a RMH here?
Awesome you guys, thank you so much for the insights! So happy I decided to come on here and ask before jumping into the project.

I will continue to study your posts, a lot of new knowledge there for me, which is great! I think I will have my dad (construction worker) read your posts and help me interpret and then hopefully come up with a plan.

Until then, thank you all so much for your guidance!
show more
1 year ago
rocket mass heaters

Mike Jay wrote:
So if I'm understanding you, there are two big beams that run the same direction.  And they roughly evenly divide the span of the joists?  So each joist is only going about 7-10 feet before it gets to rest on a beam or the outside wall?  If so, then they probably aren't undersized for the floor.  They're smaller than mine, but my joists have to support 14' of floor.

It's great you can remove the pvc, that will make sistering joists a bit easier.  If you can take more pictures of the joists in that area, we could give you some more ideas about how easily the floor can be beefed up.

Keep in mind, an earthen floor is adding weight so you may not want to do that until the floor support is fixed up a bit.  And in fixing the joists, the floor might move up or down a bit which could flex the floor coverings.

Don't worry, we're here to help you figure this all out!

Thank you for the support!!

I’m back (finally) with some pictures.

Also, yes you understand correctly. I’ve just measured and it’s a little less than 7 feet between the exterior wall and on beam, about 9 feet from beam to beam, and then again about 7 feet from the second beam to the exterior wall.
show more
1 year ago
rocket mass heaters

Kenneth Elwell wrote:Everything Mike Jay said, and...Oh my gosh! That pipe drilled through the joists!!
So the rule is the hole can only be 1/3 of the joist depth and not within 2 inches of the top or bottom of the joist.

Yikes! Someone definitely did a number on these floors, huh. I hope I don’t ever find myself in a situation where I have to DIY my way through some plumbing, but you never know! If I do, I’m happy I know this! Thank you!
show more
1 year ago
rocket mass heaters

Mike Jay wrote:Hi Abigail, the beam (second picture) should be very strong so the floor right above that should be able to hold a lot of weight.  The smaller boards running perpendicular to them are the joists.  They look kind of small to me but it depends how long they are.  How far is it from the beam to the next beam or outer wall?

I guess irregardless of that, the two joists underneath where you want to put your RMH have been severely weakened by the plumber (or DIYer) who ran the PVC drain through them.  Those huge holes they drilled in the joists have pretty much ruined them.  I would be very worried about even having a bath tub above those two joists.  Empty tub would be ok but not filled with water.

I'd be tempted to have that PVC drain line moved down so it runs below the joists and then add a second joist alongside each of the existing ones.  It's called "sistering" when you add a joist to an existing one to strengthen them.  Sometimes it's easy to do, other times it's hard, depending on if there are wires or other things running through the joists.  If you can strengthen them, the floor should be strong enough for a bath tub, dance party, or earthen floor.  Maybe a RMH but it's hard to say..

Invaluable perspective, thank you so much! Upon inspection, the big PVC goes to an old vacuum system that doesn’t work anymore 🙄 so that can definitely be removed easily, and behind it there are also pipes that run from the water heater, so that maybe a bit more challenging, but I’m sure we could make it work!

So the joists run all the way across the floor, which I would say is about 25 feet. The big beam is about 7-10 feet from the exterior wall and about the same to the next big beam in the opposite direction (under the middle of the house).

I’m sure we will do some beefing up of those compromised joists either way, not the most comforting thought to have a weak infrastructure even if we aren’t adding weight upstairs. In the process of reinforcing those joists, could we do so in such a way that would make it more likely to accommodate the weight of a RMH?
show more
1 year ago
rocket mass heaters