Scythe Restoration for functional use
Very cool! thanks for sharing! I would guess based on what benjamin said, the austrian model blade should probably be peened

Looking for Natural Swimming Pool owners in the USA!!!
I have been doing some research into this as well, I think it would be generally better to approach people about "building a pond" instead of a "natural swimming pool, as that seems to add the idea of a premium kind of thing. that said, machines and experienced operators are very expensive and there is no getting around that. depending on your soil and everything (which will require some testing) you may not exactly need to line it at all, just have an experienced pond builder that knows what they are doing and have the appropriate siting and soil tests. I don't have experience lining ponds with bentonite, but i have experimented with it a little bit, here's one thing to consider: if you don't entirely cover the area that's lined it will remain incredibly slick forever. It is very slippery. so keep that in mind. Are you planning on having some kind of filtration for this or will it be more of a static pool? if so that changes how it's designed a little bit. Here are a few videos that might have some good relevant information for you:        https://www.youtube.com/watch?v=7N4ftMi_I1I  <--this guy in the second video might be worth contacting, I know he did a nice pond in tennesee which you will see in the video there, he will have a lot more practical guidance than I can offer and he might even be kicking around on the forums here somewhere... also I hear sepp holzer has a book on pond building but I have not sought it out yet.
show more
2 weeks ago
ponds 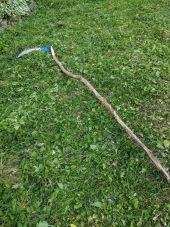 Good luck with your build.

I had also planned to do the outward facing grip on mine. I think the trouble is more the one handle arrangement than anything, with two inward facing grips, you have more leverage in the upper handle to help control the horizontal balance of the blade, but in a single grip snath all the control over horizontal balance is in one hand and the other hand is more controlling the arc of the swing and the hight of blade lay. Ideally you should be able to push the blade with no adjustment to the horizontal balance, and it should just ride on the ground. Most of the single grip snaths I have seen were relatively straight though, I think mostly the purpose of having a bent snath is so that you can have your hands mostly level to allow a more comfortable grip on the upper grip, since it will be gripped with the hand on top. However a single grip snath is gripped on top with an underhand grip, unless the angle of the tang on the blade is very high or very low, or you really want an overhand grip, I think it would probably be better to be straight. Do you grip overhand or underhand with your upper hand on that snath you showed me? Here is some video of that same gal mowing with the single grip
show more
2 weeks ago
scythes
Just ordered my first scythe

Erica Colmenares wrote:We're in an apartment in the Bellevue area of Nashville now, but our place is west of town. I'm camping out there now, but will message you when I am back home.

As for the tool, I mostly want something to help while I'm waiting for the scythe, but since the turkeys have eaten most of the cover crop seed, it's no longer emergent.

The deer have been eating everything of mine so I feel you there. I'm in Goodlettsville, would love to meet some fellow permies and nerd out about scythes! We are mostly just hobby gardeners, feel free to shoot me a purple moosage or whatever if you feel like meeting up at some point, my wife and I would love to check out some farms too, we are thinking about getting more land at some point in the future.
show more
2 weeks ago
scythes
Blade size/type
I ordered a setup from scythe supply, with the 28" TOPS blade. I didn't like it very much at first. I also ordered a 50cm falci 151 blade from OSR. I like this blade a lot, it came very sharp but more of a brush blade edge. I have a little more than an acre of steep hillside. I really didn't like the scythe supply snath. I paid extra for their sharpening service, and I sorely disappointed in the condition of the blade when it came, but times are tough and it wasn't worth the effort of calling them over $7... the stone that came with the setup is pretty medium, so coming off the peening jig it takes forever to get it into shape since the jigs center post mangles the edge pretty well. I ended up getting one of the fux snaths from OSR and it's miles better. I got a bull thistle stone and a fine dopplebock stone and a anvil setup.  I spent a long time peening the TOPS blade on the anvil and used the bull thistle stone and the finer stone on it, and it was also much better. I need to spend a little more time with it but I think for the bigger areas it will do the job well. I'm not super impressed with it though, if I had the chance to do it again I would have started with the one scythe revolution setup, and a regular anvil, even though they are more expensive. I still would have gotten the 50cm blade but probably another falci blade in the 28-30 inch range, they can take a lot more grass in one swipe, but having a shorter blade is very nice for tight areas. Out of the stuff I got from scythe supply, the TOPS blade and the whetstone holder is really the only stuff I still use. I did peen the falci blade out to be more of a thinner grass edge because that's what I use it for more than rough weeds and it cuts grass just fine. It also cuts weeds just fine. I have been seeing a small 35cm blade by falci, I'm thinking about getting it because 50cm is a little big for my garden path but it's still workable... I really wish I could speak well of scythe supply, they are super nice folks but the quality just isn't there
show more
2 weeks ago
scythes

Raised Circular Keyhole Garden On a Slope
Sure! there are a lot of permaculture people out in california, so I'm sure that you will be able to find someone. best to get them out before you do anything too major that way they can set up the groundworks which is the most important/permanent part. Though a lot of folks (myself included) would recommend spending a year or so doing nothing but really observing the land in its current state, that is, if you aren't relying solely on farming for income and don't absolutely need to get started on stuff right away. It's sometimes hard to know what needs to be done without seeing everything in every season
show more
3 weeks ago
gardening for beginners

Then and now
Nice!
show more
3 weeks ago
trees

Raised Circular Keyhole Garden On a Slope
I haven't done any keyhole gardens but a lot of raised beds on contour for directing runoff/catching rain water. I'm not sure what kind of climate you are in or what you wet seasons look like but on hills i'm pretty careful not to let too much water build up. I would make your keyhole small, and and your beds short if you get some pretty intense rainstorms sometimes, or make your keyhole more open and shallow, that way you aren't catching a pond, or at risk of blowing it out. also it's a good rule of thumb to stay twice the distance in height away from the edge of retaining walls like that, because that increases the load on them and the amount of water caught and sunk into the ground increases the hydrostatic pressure behind the wall. so if your raised bed is going to be 2ft tall, it should be placed at least 4 feet from the edge of the wall.
show more
3 weeks ago
gardening for beginners


This looks awesome! Thanks for sharing! I was going to go for a single hand kinda similar to that but with the handle facing more inwards, I might try to do a square tennon. I ended up getting my snath from scythe supply, it's not great. I'm still going to finish the snath i started, I'm kinda keeping an eye out for the perfect handle shaped branch though and hoping maybe i can get away with a round tennon. Thanks for sharing!
show more
3 weeks ago
scythes
Scythe peening questions
Standard time frames that you can kinda use while you are starting out is it needs to be peened every 6 hours of use or so, provided you are honing every 5-10 min. after a bit of experience when you really get the feel of when the blade needs honed, and the blade needs to be honed very often, then you will know it's time to peen. but it's easier to just get in the habit of doing it every 6 hours or so of use. it takes some experience to learn what sharp is like and what a blade needing to be peened is like. as benjamin said, the jigs are not great, but they are a good starting point. a good way to go is to get a jig, and an anvil, use the number 1 cap on the jig, and then finish by freehand peening on the anvil for just the very edge, but eventually you will want to be freehand all the way, and no matter what you will want some way to peen the blade if you intend to do more than 6hrs or so of work with it.
show more
3 weeks ago
scythes