Good plants for beneficial insects
I love this topic.

We had some bare spots in our small grassy area that we seeded with "Fleur de Lawn" (PT 755) this past spring, which contains a couple clovers, sweet alyssum, and yarrow among some other flowers/grasses. The strawberry clover and alyssum have come up in some areas, though no sign of yarrow as of yet.

We also planted a bunch of marigold in various places to help with aphids, though not sure if it has done anything.

The exciting thing for me was a volunteer/weed arrival of something in the carrot family (maybe queen anne's lace??) that has gotten pretty bushy in a couple spots. Today I counted six adult ladybugs on one of these plants, and later in the day I saw a juvenile. We love ladybugs.

We have also been seeing a lot of hoverflies, which I have heard are pollinators as adults. We have a lot of pollinators that visit our garden including european honey bees, an occasional bumble bee, hummingbirds, and lots of butterflies. I also recently read that hoverfly larvae eat aphids, so that's good.

I remember reading that we want to attract lacewings, though the only time I think I have seen a live adult green lacewing is at night when they almost fly right into me. I imagine the adult lacewings are the ones who like the umbrel flowers, and the juveniles predate on what we consider pests. I don't know a juvenile lacewing when/if I see one.

I have killed a few wasps trying to colonize on our house in the past, but Stefan Sobkowiak (and others) say we should gladly welcome wasps. Hopefully my two-year old son learned his lesson during the week in which he was stung five separate times by honeybees, most of which he had literally picked up in his hands from the flowers they were visiting. I think an angry mob of wasps could inflict more pain than a lone honeybee sting.

Lastly, I was at a friend's house recently who had a bunch of small preying mantids living in his backyard. He caught one and gave it to me to take home and release in our garden. Very unnatural, I know. What sort of plants might attract a friend for my new pet preying mantid??
show more
1 year ago
pollinators 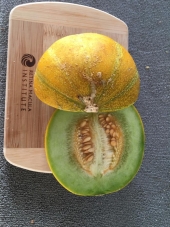 Ugly can be delicious.
Thank you for this encouragement, Jen.

We are novice gardeners, and earlier this year we planted (seeds of) a few types of melons including two small watermelon varieties, cantaloupe, and galia melon. It never gets too cold around here (zone 11a), though it does take a while to warm up in the summer, so I guess they took their sweet time getting started. In the meantime, we forgot what we planted where and even added some extra seeds in case the original plantings just gave up. Eventually we had some nice looking melons growing - they were greenish with longitudinal yellowish stripes. We thought they were one of the varieties of watermelon. One of them started turning more yellow and developed a scaliness (which we later realized was similar to the skin of a cantaloupe). We picked it because we were concerned it was over-ripening on the vine. We thought, oh that yellow watermelon doesn't look so good, hope it isn't ruined... Upon cutting into it we observed green flesh, like a honeydew, but we did not plant honeydew and the outside didn't look like honeydew....Turns out it was the galia melon, which we then researched and learned is a cross between honeydew-cantaloupe, thus explaining the coloration (inside & out) and taste (delicious!). 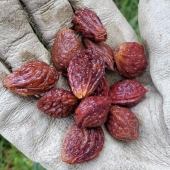 Growing Peach Trees from Seed Naturally
Hey Steve,
I guess I was composing my reply as you posted your update, which answered a few of my questions, seeing as you have already successfully had seedlings come up this year.
I found your youtube video when you were planting the peach pits/seeds, which appears to be from February. Between Summer 2019 and February 2020, where did you keep the pits? I imagine February in North Carolina provides plenty of chill hours in case the seeds had not already been cold stratified. I am under the impression that cold stratification helps with peach germination. What is your experience with this?
While you mentioned not watering the peach seedlings, I did notice an irrigation trough around the raised bed, which may help wick water into the soil, keeping a certain level of moisture in the bed (so long as there is some water to wick)? You also mention wanting to seed them in their final location next time rather than in somewhat of a nursery area then to transplant them to another spot. I think I may have more luck planting a bunch of pits in one irrigated raised bed or the like in order to have somewhat more consistent moisture and fertility, as opposed to planting them sporadically in places that may have sufficient room for a future tree but don't yet have quality soil or moisture.
Does anyone else have experience growing peaches from seed in an arid or mediterranean climate? It seems that the volunteer trees around here (I observe in the neighborhood) are growing quite close to their probable parent tree, enjoying her protection, though maybe not optimal room to grow long term.
I'll update you with how we go about planting them and can post photos if we succeed in growing something.

Growing Peach Trees from Seed Naturally
Hi. Our family is contemplating growing some stone fruit from seeds as well! We have been enjoying peaches, nectarines, plums, and plum/apricot hybrids from our local Southern California  farmers market (they’re actually grown in Reedly, CA) and want to try to plant some seeds.

How do you plan to approach this, Steve? Direct seeding in the ground? In containers? Natural stratification or ?? Maybe it starts with finding local neighbors who successfully grow peaches and collect seeds from them? What’s your plan?

As you may be able to tell, this is my first post, as I have just been “lurking” for the past few months trying to glean some gardening wisdom. This topic enticed me to take the leap to active participation.
show more
1 year ago
fruit trees