Cattle and sheep together
Thought I would chime in here, as we have sheep and one yearling steer calf together. As the calf has gotten older (he's basically grown up with the sheep) he sometimes tries to play with them, which can look scary, but in the end is harmless. He's probably 400 pounds now at least, and we've had our week old lambs cuddle up to him in the barn. They seem to really get along just fine. I can't say for sure if that will always be the case with sheep and cattle, or if it's just because we have a solitary calf and he grew up around cattle. It helps to have smaller shelters around that the cattle can't get into, because he does seem to monopolize our barn sometimes.

Regarding minerals - yes you have to be careful because sheep can't handle the copper that is in cattle mineral. So we have buckets out of sheep mineral, and then a cattle block on a small shelf in the barn that is too high for the sheep to reach. The calf seems to enjoy both kinds of mineral while the sheep just stick to there's.

Now our goat on the other hand is a total bully to the sheep!
show more
7 months ago
cattle
Hillside meadow ideas
I was coming to this forum to post more-or-less the same question! We have some steep sections in our front yard that are a headache to mow (or rather, weedwack, it's too steep for our mower....or rather, eventually I'd like to be good enough on my scythe to just scythe them down). I actually pulled up a bunch of creeping juniper from some of these steep sections that was planted years ago, and sprinkled lots of white and crimson clover seed (also we planted a bunch of apple trees here, the main reason for pulling up the creeping juniper)  But other steep sections that were just grass, I have basically just let grow all summer, and only mow them down once a year.. This seems to be working because, in addition to grass, there is plenty of golden rod, joe pye weed, and other good stuff for pollinators. There are some plants i'm concerned about latching on in these sections, though. Mostly multi-flora rose, which is a big problem around here; and box elders that seem to want to grow anywhere. So I go through and dig those out if I see them. I'm thinking that if you just let the grass grow all year in certain sections, and mow down once in early spring, you'll get some good other native plants establishing themselves with minimal other effort....but if anyone else has differing strategies, please let me know
show more
7 months ago
lawn 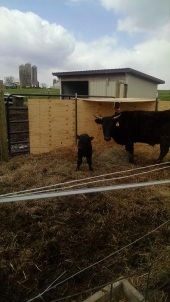 Lorinne Anderson wrote:I suspect the calf that failed was sickly from the start, and slowly went further downhill as time went on.

I'm thinking the trick would be developing a relationship with the producer of the calves you are interested in; be it by email, a club, the pub, whatever. That would get you on site, so you can evaluate the environment, and likely get you cooperation with a calf that spends at least a few days with Mum, to ensure the colostrum angle is covered.

I would also take the time to ensure you have a good vet (research now) and get any new calves evaluated the day you pick them up (swing by the office for a welfare check). One thing I did not see mentioned is deworming, or parasite control. If you have a multi species grazing set up this could be an issue with transference between species.

Husbandry is most critical with babes, navel health, temp checks, etc., should be monitored and logged, daily, at least initially, until you are more familiar with what "normal" looks like.

Pneumonia in calves is often a side effect of other conditions (gut) and bloat or displacement puts pressure on lungs. This may not have been misdiagnosed - it could have appeared later.

Chatting with the 4H organization or kids who raise calves MIGHT be your best source of info!

Thanks Lorinne, I think you're right that the calf was sick from the start. And that's good advice to talk to a 4H club, I hadn't thought of that! Since this has been our first experience with cattle, I didn't really know what to look for (lethargy, boogers...he always took longer to stand up than the other calf). Now I know. The reason I think the vet messed up is, when the vet came out the second time, when the calf was clearly sick, I asked him if it could be pneumonia (in my cattle book it says that is the most common ailment for calves). He took the temperature and looked at his breathing rate - and said no, it was something else. He took a fecal sample and it came back with a high load of coccidia, so we treated him for that....but when the calf died a month later, I took him to the state run vet lab nearby, where they preformed a necropsy and told me it was pneumonia that killed him. And they said it could have been misdiagnosed because cattle can control their temperature if they're sick...like our calf was just hanging out in the shady part near the barn because he was already hot...at least that's how I understood it. But I suppose you're right that the parasite load was likely a contributing factor to his death.

I have the number of a different veterinarian I'll call in the future. Luckily there is a state run veterinary diagnostic lab not too far from where I live and does poop samples for $5, so I have been taking samples there a couple of times a year, for our sheep as well to determine if I should deworm.  Which brings me to another question: it seems like most old timers I've talked to around here routinely de-worm their cattle twice a year (spring and fall)...I've learned with sheep to not routinely deworm them, but only if they do have parasites (which I learn from the samples) because otherwise the parasites quickly grow resistant to the dewormers. So I've been treating our calf like that as well. He hasn't been dewormed since the fall. Do you think that's a good way to proceed, or should I go ahead and worm him more regularly? For what it's worth, I've heard that with multiple species grazing the same pasture, they actually cut down on the parasites, and that they're usually not easily transferred between species...and we have ample room for them all so far, plus I'm rotating them every couple of weeks. Though I could be wrong - it's been a year of a lot of research and some of it gets scrambled!

Advice for raising dairy bull calves for meat
Thanks Timothy for your thoughts...all good to take into account! I luckily work from home, so bottle feeding is not too big an incursion into my life. Last spring, I actually came to enjoy it, and the calves were very tame... in fact our one still comes running when he sees us! That's another factor that is important to us, since we don't have all the cattle gates/funnels/and other infrastructure. Having a tame and friendly calf has been a lot of fun (though I will definitely have to harden my heart next Fall when it comes time to slaughter). I also don't mind the extra time it gets to come to full size, though that is good to factor in to the overall cost/benefit analysis. So far we have more than enough pasture for our livestock. I did spend some money on hay over the winter, but this year am planning to stockpile more of our pasture. I am definitely learning a lot as I go...I think the main lesson moving forward is to get a hybrid diary calf if at all possible. Thanks again!
show more
7 months ago
cattle

Advice for raising dairy bull calves for meat
Most of the bottle calves available around here have been with their mother only 1-2 days...and then they are sold (in some cases at least) not directly from the Dairy but from a sort of calf-middleman - so there's not much picking and choosing on our end. I guess by the time we could potentially get them, they are between 2 to 8 weeks old, and there's no point in feeding colostrum from a kit.

If a calf does seem to have pneumonia, do you do anything about it?

If we ever do decide to breed our own cattle, we are definitely interested in Dexters, so good to know about the dexter jersey quality meat...but at this point Im not interested in that. Maybe one day!
show more
7 months ago
cattle

Advice for raising dairy bull calves for meat
Hi there,
Is anyone else out there raising dairy breed steers for meat? We have 3 acres of pasture, and last spring, bought two dairy bull calves that were 6 and 8 weeks old, banded them and bottle fed them for a while (can't remember how long exactly, maybe 6 more weeks?)....we had a vet out here to give them some vaccines (wish I could remember what they were exactly), and put them with our sheep. After a couple of months, it became clear that one of them was very sick, so I had the vet out here again, who mis-diagnosed the obvious (in retrospect) pneumonia. The calf ended up dying. The other calf is now over a year old and very healthy! He's in with our sheep and donkey so has some company. The one who lives is a Holstein/Jersey cross. The one that died was full Jersey. We've decided to wait another year (Fall 2021) to take this steer to the slaughterhouse. The meat will be for us and some friends. The goal with all this is to raise our own food.

All of this background is to get to my questions. I'm interested in getting another couple of dairy bull calves, and doing the same thing. To me, the pros are:
-They are cheap. They were each like $80.
-We'd be giving them a much better life, on our pasture, than almost any other option for them
-We are not set up to breed cattle - we are only a small homestead, not trying to run a major operation
-After some research, dairy breeds ARE supposed to have tasty meat, especially Jerseys. I know some people think otherwise. We haven't tired ours yet, of course, but just throwing this out there.

The major con, and my main question, is that they are unhealthy. Since they get so little time with mama cow and are just treated roughly from the start. It's been hard to find other people who do this with dairy steers, and the one person I talked to who tried it, has switched to beef breeds because they are so much hardier. But I am still interested in sticking with the dairy breeds.

I'm looking for advice to keep these calves healthy from the start and avoid pneumonia. I like the idea of as little medicine/vaccines as possible, but would do this when they are young, if that helped their chances of survival and thriving. I know now that the cross breeds will likely be hardier than pure Jersey or pure Holstein, but there isn't enough dairy calves around here to be able to pick and choose really. Anyway, any advice is appreciated!
show more
7 months ago
cattle