a garden of hope and charity
To defend the yummy little plants from hungry gophers and birds I put them up on a pallet and a sort of upside-down tray I made from some scrap wood and a 2'x5' 1/2" galvanized wire panel.

There's a crate with acacia and radish seedlings, and one with a bushy potato, and several fava beans and mammoth sunflowers in gallon containers made from landscape cloth.

I also took a couple of sacks of potatoes and sweet potatoes and stuck 'em all around in the gopher holes.  While doing that I found one of the sweet potatoes that I had buried earlier, it had about half eaten off but didn't seem to mind.
show more
2 months ago
projects

a garden of hope and charity
This is part of the area between the wall and the garden plot where I
scattered a bunch of chia seeds and black beans.  As you can see, once it
started getting watered all of the seeds that were there sprouted, not
just the chia and beans.  I'm eager to see what they are.

It's fascinating to me that the birds leave these plants alone but the
corn and broccoli are eaten.  One brassica seedling seems to look much
like another, so how do the birds tell them apart?  I could probably get
some insight by nibbling some of these little greens, eh?  Sparkler White
Tip radish seedlings probably taste better than wild radish?

Once these plants get large enough to trouble the passage of the riding
lawn mower they can be pruned back for chop-n-drop or a compost pile.
And I'll bet they're edible too.  Like sheep sorrel.
show more
2 months ago
projects

a garden of hope and charity
Here are some of the wee corn sprouts.  You can see that they have been
nibbled but otherwise seem okay.  They're for windbreak and (eventually)
compost so it's okay if they're shorter than normal.

The question is will they survive the gopher? (Singular because apparently
they're solitary and pretty territorial.)
show more
2 months ago
projects

a garden of hope and charity
The broccoli patch is the lightly composted are between the two
horizontal rows of stepping stones (the soil is darker and there are
woodchips on it.)

The thing to notice here is the complete lack of broccoli seedlings.  I
planted thirty, and then about fifteen more after those were eaten, which
were also eaten.  No one's eating the grass sprouts though...
show more
2 months ago
projects

a garden of hope and charity
Here's a glamor shot of the four chickens.


We got them as day-olds (although they were more like five-day-olds) from a nice lady in Mill Valley and now they're about four months old.  They should start laying eggs by Spring.

Their main task will be manning (chickening?) the chicken tractor at the garden to bring more area into cultivation.  BTW, does anyone know if dry old thistle bothers chickens?  I get splinters from it and I wonder if I should clear it myself before running the birds on there?

a garden of hope and charity
Because the birds ate everything I brought the seedlings back to my house and put them in containers.

I also put some of the acacia seedlings in a tray.  They're sharing with some radishes, and it will be interesting to see if they grow well.  Acacias are said to be allelopathic.

I got some galvanized hardware cloth, chicken wire, and bird netting, and there's some bits of lumber and an old wooden pallet I can use at the garden site, so once I build a cage or two for them I'll bring the plants back and put them in there.
show more
2 months ago
projects 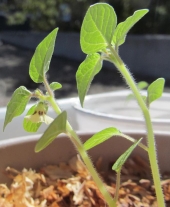 Tiny Dwarf Tamarillo flowers.
Some photos of the berries.  These plants are 4" - 6" tall.
show more
2 months ago
fruit trees

a garden of hope and charity
It's not that bad.  In hindsight it seems obvious, and now I'm not sure what I expected.  There were blue jays watching me plant the seedlings...  I basically laid out a little snack bar for them.  :)

I have six sunflower and six fava bean seedlings that I didn't plant out and I've transplanted them to gallon containers to get bigger.  I'll probably build a "plant terrarium" and grow crops in that to have something to show for the effort, and then also grow things that can harmonize with the local ecology.

I have high hopes for the Maximilian sunflower.  It's from the Great Plains, but if it likes conditions out here by the beach...  It grows tons of flowers each with tons of little seeds, so that's great for the pollinators and birds, and you harvest the tubers like Jerusalem artichokes (aka sunchokes).  (Hmm, the gophers might eat those.  We might get a church cat, but then the coyotes will eat it. Hmm.)

(The thing about the gophers is they're the ones keeping the soil from becoming compacted.  They run through there like giant worms, fluffing up the soil like pillows.  Every time I have to step off of the little paths I've made the ground compacts an inch or two.  (So I try to avoid that.) It's the gophers that make it, uh, expanded.)

I just started learning about "air pruning" and it seems great.  I found this video about making your own grow bags, and I've been doing that.  I'm pretty excited all over again.

"How To Make Your Own Grow Bags"


I'd rather be making a food forest integrated with the local ecosystem, but that's a huge multi-year project (that I'm not qualified to design).

a garden of hope and charity
Cheers!  It's really good to be gardening even if it's just a tiny demo
garden.  Thanks for the great advice.

(BTW, when I said chia can't germinate on lava, I meant molten lava.  Once
it's cooled they'll grow on it. ;-)

So far everything has been eaten.  We're right on a wildlife corridor.
Lots of birds, raccoons, and a family of coyotes live right there.  We're
kind of at the tip of a vast forest that stretches to Santa Cruz.

The corn is still there, leaves nibbled.  Everything else, sunflowers,
chia, broccoli, etc. was eaten.  Gone.

I got some bird netting and I'm going to build some kind of gopher-proof
raised bed or something.

That takes care of growing crops, but I don't like how it's basically
making a giant terrarium and letting Nature babysit it.

Eventually we can make something that produces crops and is integrated
with the natural systems right there.  Maybe not a food forest, but
something.

The original ecosystem was grass, shrubs, and a few oak and pine trees.
Tule elk might have grazed here but this wasn't a high-density area.
show more
2 months ago
projects

I tried both too this year but forgot which was which.  I started them
way late (in late July) and it's too cold here, so the ground cherries
(as you can see in the photos) are only a couple of inches tall.  The
dwarf tamarillos sprouted and then steadfastly refused to grow.  Only one
has second leaves on it, the rest have stayed the same size as when they
first sprouted, with just two leaves, for a couple of months.  My hope is
that they're just waiting for Spring to do their thing.
show more
2 months ago
fruit trees