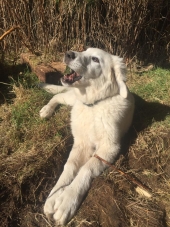 Cougars, chickens and LGDs
We have one LGD- Anatolian.  He is an amazing guardian and has been sleeping in the goat den (enclosure) overnight since he was 4 months old.  He has a separate dog house then the goat pen and guinea fowl coop.  He has kept at least one cougar out of the den by his barking.  We investigated the area the next morning and found a dead deer carcass about 100 ft from the goat den.  We saw the paw prints of mother and cub and it was a very small kill zone.  We opened up the den gate and he trotted right over to it grabbed the liver and sallowed it whole.  He loves to eat ground hogs as well as an occasional rabbit.  One word of caution. Don’t try to take food or perceived food from them. Try to teach them “leave it” command when they are still young.  It has come in handy for us in several occasions.  Good luck. They are very different dogs but well worth the time and energy if you train them and raise them properly.
show more
3 weeks ago
predators