Trip back in time: hedging or live fencing video
Hedge laying! The art is seeing a bit of a revival here in the UK, or so it seems when driving around the countryside. The hedging mixes for sale for the establishment of new hesges generally comprise of mostly hawthorn and blackthorn but can also include hazel, willow, cherry... Most of our native deciduous trees can be layed although elder isn't considered desireable. Not sure why but possibly just tradition/superstition.
show more
1 year ago
fencing
Linden/Lime coppice
This article suggests that Lime is usually coppiced on a 25-30 year rotation although I imagine that could be coppiced at a more frequent interval and still product leaves.

Coppicing is a simple process, especially if the tree is relatively small. Once the tree has reached the desired size/age, cut the stem/s low to the ground (1-2") while the tree is dormant. From the following spring the tree will produce multiple shoots. These may need protecting from grazing animals and livestock.

There's a loads of books on coppicing and a fair amount of info on Youtube. Ben Law has written some excellent books on the subject and is a professional coppice worker himself.
show more
2 years ago
trees 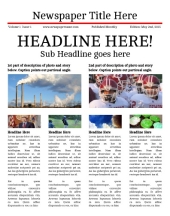 I need help with creating an electronic newspaper
Can you not just create the newsletter on normal word processing software (I use Libre Office rather than Microsoft)? I'm sure you'd be able to find or create a template that suits your needs.

How're you planning to distribute your newsletter? There might be specific options for email.
show more
2 years ago
village

What can I grow in England ?!
Where to even begin? Allotments and back gardens can be some of the highest producing forms of food production. Much higher per acre than monocultural farms!

Just pick up any vegetable growing book and you'll get an idea of what is possible. Dowding's books are a great place to start and offer a sensible and logical way to grow food.

If you're looking to be a bit more adventurous in what you want to grow there are many y great resources. Authors to look out for include Martin Crawford and Patrick Whitefield although there will be many more. There are also numerous blogs and websites with a host of information. One of my favourites is Of Plums and Pignuts which is about an allotment based forest garden in Scotland.

Another option is to visit local market gardens, CSAs, orchards, permaculture projects, etc and see what they're up to.
show more
2 years ago
organic
Chestnut vs sycamore vs willow
I'd give the sycamore a go then! It'd be interesting to know how you get on with it.
show more
2 years ago
natural building
Chestnut vs sycamore vs willow
Hazel tends to be the most commonly cited material for woven hurdles but willow and sweet chestnut are commonly used. I'm not sure about sycamore.

Hazel has properties which lend it towards hurdle making (easy to rive/split, flexible, and can be bent/twisted around the zales without snapping).

Willow is very flexible and can be easily bent around the zales although I'm not sure larger rods will do so without snapping.

Sweet chestnut splits easily and will probably last longer than either hazel or willow.

Another consideration is alternative uses for the different kinds of wood. For example, if you leave the sweet chestnut to grow on you'll have great fence posts that will last ages. Sycamore was traditionally used for bowls here in Wales because of its supposed antibacterial properties. You might want to save your hazel (if you have any) for pea stick and bean poles.

The quality of the material is important too; you want long, straight rods with as few side branches as possible (knots will make the rods more brittle and more difficult to split).

Ben Law's craft book has a section on hurdle making as does Ray Tabor's. Both describe many other traditional crafts and required materials that might inform your choice of material for the hurdles. There's stuff on YouTube too.
show more
2 years ago
natural building

Small cob construction as a kiln?!
That channel has a number of iteration of cob kiln if I remember correctly. The whole channel is really interesting!
show more
2 years ago
earth bag

paul wheaton wrote:this video has a lot of good info:

- make the wall lean in

- set your rocks so the length of the rock goes into the middle of the wall rather than along the wall (3:33)

- starting the build on top of the soil rather than starting below the soil.  That can be okay.


This bloke really knows what he's talking about, great video!

Having done a bit of dry stone walling, I can say that while it's easy to understand the basic principles it can be quite difficult to put them into practice. Especially if your stone happens to be of the awkward variety! I've always been told that the occasional deliberate mistake can be acceptible if there are no other options. You'll see in the video that there are some running joints but not too many. There are things you can do to mitigate some tracing or running joints.

For tracing, and as a general good practice for walling, you're trying to trap the stone with as much friction as possible. If the traced stone is firmly gripped by the stones next to, beneath and above it, then this is good. I would ensure that these stones were laid into the wall as it's important not to have another or multiple traced stones in the same location as this just compounds the weakness in that section.

For running joints I have been told that two stacked stones is fine but three is not. Again, you want to ensure that the neighbouring stones are well placed in order to mitigate any weakness from the running joint.

Another consideration is 'bridging'; this can happen when your coursing is uneven or if you're using smaller/larger than ideal stones. The stones you lay want to be sitting "two over one and one over two" much like in bricklaying so, if you end up doing one over three, you are bridging the middle stone and thereby establishing a weakness where the middle stone is not being trapped and held by the stones above it.

In terms of a walls foundations, I have always been told to dig them in unless we've been building on bedrock. If not, soil can be erroded from beneath the wall by wind and water allowing the bottom course of the wall to shift over time.

If your tie (or through) stones aren't long enough you can get at least some of the benefit by having the longest stones you can find sitting at least half way but ideally 2/3 to 3/4 of the way through and then alternating the side in which the end of the tie stone is hidden in the wall. As the stone that makes up the final 1/3 or 1/4 will be at a relatively shallow depth it's important that it is trapped by a longer stone or stones above it.
show more
2 years ago
stone work
Timber or log treatment under water for future use
I know that when I pulled a waterlogged chunk of alder from a pond with the intention of carving from it it ended up being good for nothing. It started to rot almost immediately as it never dried out.

Logs submerged in water will have a reduced or stalled rate of decay due to the anaerobic conditions. Some types of wood, particularly elm I believe, were traditionally used for piping due to its durability under water.

Personally I'd be buying timber just before use in order to minimise the risk of loosing the logs to decay, termites or whatever. There are methods of construction you can use to minimise rot without having to resort to submerging your timber before use.
show more
2 years ago
woodworking 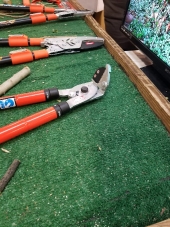 What are your​ most versatile tools?
My billhook gets a lot of use throughout the winter months; coppicing, hedge laying, snedding trees... A hook that's fits your hand perfectly and is just the right weight for you makes for a joyful tool using experience!

Other tools I find to be versatile are mattocks, knives, spades and wheelbarrows. A pry bar or digging bar has come in handy many times when extra leverage has been required too.

Oh, and fencing pliers can come in handy too.
show more
3 years ago
gear