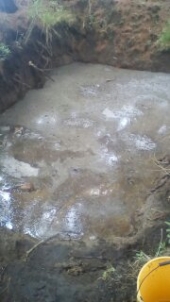 My rainwater catchment
So the guy I hired to do the digging with a backhoe didn't get the memo about the shape of the ponds. My son tried to tell him but he said that he knew how I wanted the ponds. He was going on my original instructions from a few years ago when he dug the first ponds. He dug deep pits with steep sides. So now I have to have the machine back or try coating with oil-lime paint.
show more
1 month ago
ponds

Are Pine trees useful for anything other than shade?
On my farm we have a gully filled with big evergreens they call Ocote with long needles. It grows edible mushrooms in the ground and since the ponds are in the same area the mushrooms have started to grow more and later in the fall. Needles also good for mixing with cement or bricks.

My rainwater catchment
The idea for the oil came from the use of animal fat and hydrated lime utilized since ancient times. There was a little bit of contamination with the oil. I used about 40 l of oil and probably not even 1/4 liter made it into the water. I started out using the ancient technique of lime and lard but I quickly noticed animals scratching at itand I figured the fungus could probably digest it a lot easier than it can digest oil.
show more
4 months ago
ponds

My rainwater catchment
Holding more water. We're building another big dam on the property line on top of a smaller dam this winter. But I'm going to make all the future dams with wide flat bottoms like a small flood plain where I can grow crops in the moist soil rather than trying to move liquid water around. Another idea is to Canna edulis which can utilize the water later in the year of course it would be pointless to water the corn or something like that in October. And the trees survive the winter on their own so I'm trying to think of a crop where it actually makes sense to use the water in the fall before it dissipates. One year we used it to plant trees in the fall but that is a little bit risky because we might not get more significant rainwater in the ponds until June or July. I made this post because I was going to post a video but apparently I can't post MP4
show more
4 months ago
ponds

My rainwater catchment
I know I have been very reluctant to put in plastic liners and I may still do that one day. This year I used a new method of sealing tanks with Lime and Used Motor oil . We painted 2 tanks with it for a cost of about $35 It seems to be working quite well and there is minimal contamination in the water from the oil. The oily layer is now buried under a layer of sediment so next year contamination should be zero. I did use some pork lard as well but I was unsure how long it will last, I think it will be digested by some organism. The oil could be digested as well but hopefully more slowly. One thing I learned is you can't mix the oil and the lime and then add water, you get a dry paste that is more like thick tar. It's an exceptional material but can't be spread with ease and goes on super thick so it would cost much more to cover the whole area. The ideal mix is like paint. I used about 5 bags of lime and 40 liters of oil. Normally the water seeped out in December so fingers crossed there is still water now. The hope is to use the water in early fall to finish a crop or have it last until spring and use it to start early in the season before the rain comes. It's a summer rainfall area.
show more
4 months ago
ponds 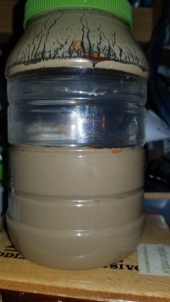 Building Cob with no local clay?
If you want to get clay out of soil with not much clay in it there is any easy way that I learned of by accident. Find a gully or a big ditch that has really muddy water when it rains. Dig 2 holes in the bottom the first hole is to catch the sand. The second hole is for the clay. Throw all the dirt down hill of the 2nd hole to make a dam. If the runoff escapes form the pit it will carry the clay with it. You have to catch all the water. Once you have done that you will have a free source of clay that is replenished every time it rains. The clay you capture will probably be way to pure for Adobe and will need sand added.
show more
8 months ago
cob

Dryland Winter Cover Crop?
Thank you Tyler. I had finally found the name about a month ago but then I forgot it again. The species is also recommended by the government of New Zealand as fire control. I'm sure they spent a lot more money on determining that than I did. Probably 1000s of times more because I spent about 10 bucks on gasoline to haul the bulky plants that's it.
show more
8 months ago
cover crops
5 hectares in Yucatan stay for free
It hijido. You need mexican citizenship to own it. Any tree cutting must be approved by the hijidal commissioner. It's possible to change the classification to private property but there is cost involved and then there would be property tax although it is vary low.
show more
8 months ago
permaculture real estate

Bactris gasipaes common names chontaduro or peach palm
The pic below is a small type of chontaduro. 6.1% fat 41% protein 50% carbohydrates also high in amino acids and vitamins. Full of hairs but the taste makes it palatable. They are tropical but can survive here(Puebla2000m), my neighbor has a mature tree. Would make a great tree for silvopasture cus the fruit drops all year. Would also be a great staple food for humans.
show more
9 months ago
plants