Posts: 3605
Location: woodland, washington
147
posted 9 years ago
there's a long history of beekeeping in bee houses, especially in Eastern Europe. a search will likely yield photographs of beautiful examples. the advantage to the bees is mostly, as far as I can tell, protection from weather extremes. the advantages to beekeepers are, again as far as I can tell, more honey, longer life of equipment, higher concentration of bees so less travel. the primary disadvantages are the cost of construction and the increased likelihood of spreading disease and pests between colonies in the bee house.

seems to me like there are more advantages than disadvantages. so, though I'm not generally one to weigh pros and cons, I decided to build a shed for some of my bees. this is what I ended up with: 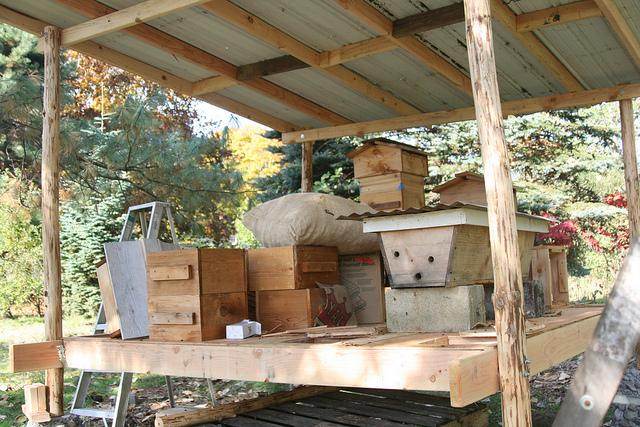 it was, obviously, a mess at the time my sister decided to take this photograph. it was also unfinished, and remains so for the time being. but I'll go over some of the existing details.

it's built on 18" concrete and river rock piers. the piers extend 12" into the ground. these are probably quite excessive for this particular structure. but if I ever want to replace the bee shed with a very small high-rise building, I've got the foundation. my thinking behind the piers was to raise the bees (and the rot-prone wood) above ground-level moisture.

the shed roof will provide shade in the heat of summer, but allow sunlight in during the three cooler seasons. I'm fond of Warré hives, which usually include a fairly elaborate top to allow adequate cooling in the summer. in my climate, cooling is generally only an issue for three months at most. the shade during those months will allow me to do away with the expensive Warré top, which should save me material costs in the long run. and the roof will keep most, though certainly not all, of the rain and snow off of the hives.

I can fit at least 12 hives in there, and potentially up to 16. so maybe the foundation isn't overkill after all. maybe such a high concentration of hives is a bad idea. time will tell.

I'm experimenting with bottomless hives. I cut holes in the floor of the shed so I can skip the bottom boards. excessive moisture and varroa seem to be pretty serious problems around here. skipping the bottom board allows any condensation to exit the hives without collecting in the bottom, and any mites that are shed by the bees fall to the ground instead of waiting on the bottom board to hitch a ride back up with the first forager to walk by. and the hives are at least 24" off the ground, so it seems unlikely to me that mites will be able to easily find their way back to the hive once they're dropped. the obvious disadvantage to this is increased draftiness. I'm hoping the added shelter from the shed will more than make up for that problem. the other potential problem is predation. my experience so far suggests that this won't be an issue. my bottomless hives have done better than my hives with bottom boards this year. other folks have used screened bottom boards to deal with these problems and with good results, but I was feeling contrary. we'll see.

future plans for improvements:
-removable hazel wattle walls for extra shelter from wind
-a lift mounted in the rafters to ease adding and removing boxes and to weigh hives for assessing winter stores
-vines (hops, grapes, kiwis, ivy, groundnuts?) growing over the shed for summer cooling and maybe a little extra local forage

so, I'm curious if anybody else is trying anything like this, or if anyone sees any glaring problems or significant (or minor) possible improvements. what do you think?